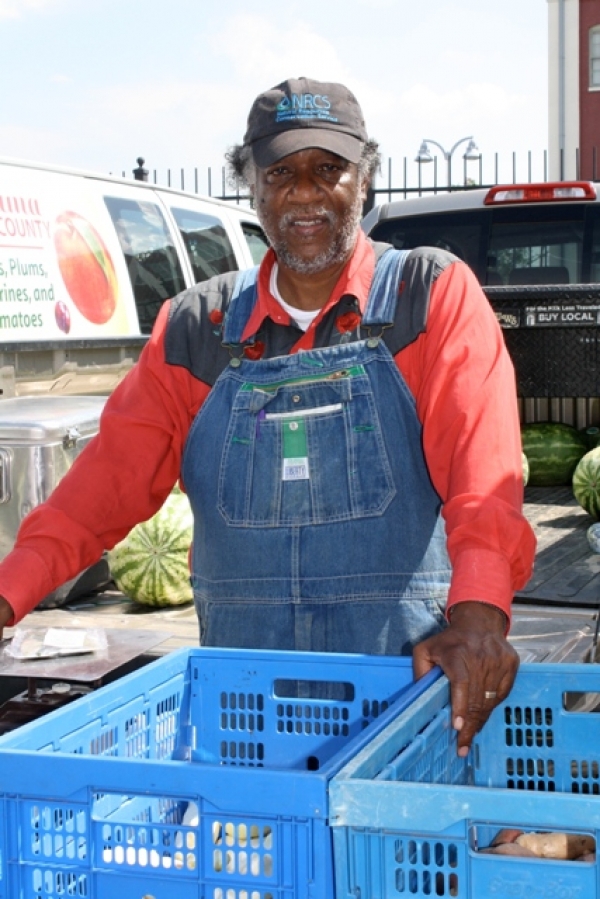 Ben Burkett’s family has been farming since 1889. Over the years, each generation bought more land and he now runs B&B Farms on 296 acres. He grows 15 different varieties of vegetables, as well as timber. He is active in local, regional, national and international organizations.

Ben Burkett is President of the National Family Farm Coalition and he represents the NFFC on Via Campesina’s Food Sovereignty Commission. As if he has too much time on his hands, he is also the current director of the Mississippi Association of Cooperatives, the local arm of The Federation of Southern Cooperatives. The Federation, an umbrella organization composed of 35 co-ops, representing 12,000 African American farm families from Texas to North Carolina, assists farmers in land retention and the development of economically self-sufficient communities. Member co-ops purchase supplies and receive marketing, financial and technical assistance through the Federation. Ben believes the co-op structure is the only way to survive in the rural south. For the past 20 years, Ben has been a leader on many issues – the biggest of which is the Black Farmers Lawsuit, which compensated black farmers for years of institutional discrimination across the country. They started the lawsuit back in 1988, and were finally successful after three appeals. Ben could not believe it: “I never would have thought the government would have paid anybody any money. At the beginning, I would say, ‘you’re never getting a dime.’ But, I was wrong.”

The final settlement ended up allocating about 16,000 farmers nationwide about $50,000. But, Ben would have preferred the money was pooled and went into a trust to borrow against or to use to help new and beginning farmers. That would have allowed the money to help future generations and offer a layer of security to current farmers. Ben tells me that was how the Native Americans handled the case.

I ask Ben why even file a lawsuit? He explains how it began and where they are today:

“The lawsuit was about discrimination in the county office of the USDA. I got a loan to buy my equipment, my seeder and fertilizer. I couldn’t write no checks. I had to write a check and somebody in the [USDA] office had to sign it. They were only doing black farmers like that, they weren’t doing the white farmers like that. Say, if I wanted to buy $5,000 worth of soya bean seed, I had to go find the seed that I’m getting from the Forest County co-op and he get an invoice. I go back up to the office and he write a check. They sign, I sign and then I have to take it back down to the store. I’m just one.

“A lot of farmers, they go in and get their loan approved. This happened to me too. My loan approved in February or March, but I didn’t get the money ‘til July the 15th. That be cutting time. Planting is over. It was several things like that, that brought the suit about. A lot of them went into the offices and they denied them, wouldn’t even give them the application. They say, ‘You can’t make no money farming, so. . .’ In the lawsuit, it had to happen to you between ’81 and ’96. It was happening before then and it is happening now–after the lawsuit. That’s just the price of doing business, I suppose. “As long as it’s set up that way, we can’t change. Discrimination, morals, ways people think–you can’t policy or legislate that away. That’s just the way my heart is. All kinds of laws about discrimination, regardless of race, religion, creed or color. All the USDA rhetoric. But, it is much better. I remember the ‘60’s, I remember segregation and all of that. It is better. Not as good as we want it to be, but it ain’t as bad as it was.”