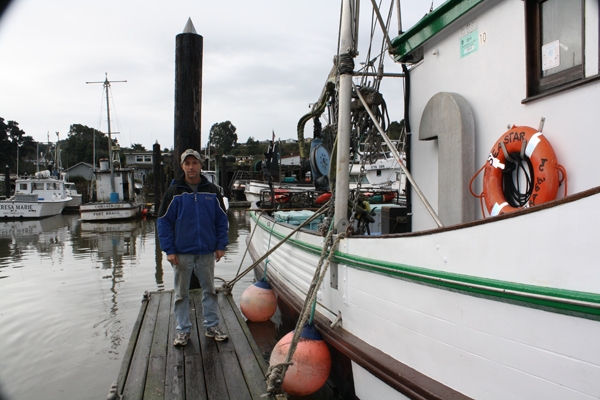 Ben Platt is a second-generation fisherman on the fishing vessel Sea Star. He trolls for salmon and albacore, longlines for black cod and traps crab from California up the coast to Washington and over to Alaska. Ben feels the current fisheries management system is devastating the communities and the environment. Ben is on the Board of the Salmon Trollers Marketing Association and a member of the Pacific Coast Federation of Fishermen’s Associations.

On his 47-foot troller, F/V Sea Star docked at the sheltered harbor in Fort Bragg, Ben is always working, even if it’s not yet fishing time. He maintains his vessel and gear in proper sea-faring condition. This keeps him and his crew safe, and helps them catch more fish.

Ben starts talking about various problems – those his father encountered, the ones he still faces today and what he anticipates will be the issues for the next generation of fishermen. As Ben starts thinking about the management system, he shakes his head repeatedly. Decision makers often do not listen to fishermen because they think fishermen are motivated by self-interests, rather than by stewardship of the seas. Ben believes that is a missing link in proper fisheries management. “It is within our best interest to promote sustainable fisheries in whatever fishery we are involved. If our fishery isn’t sustainable, then we will be out of a job and our kids won’t be able to do it. We spend more time on the ocean than any policy makers or biologists or managers or policy advocates. If it is going to work for everybody in the future, there should be more trust put on the fisherman’s point of view. Utilize our knowledge. If I fish year round, I’m spending at least 200 days a year on the ocean.” The hot issue in the fishing world is individual transferable quotas (ITQs) also known as individual fishing quotas (IFQs) or catch shares. When I spoke with Ben, the west coast trawl fishery was just about to implement it’s first program and Ben is worried about the effect it would have throughout all the fisheries.

Ben believes it will have a ripple effect throughout all the fisheries. Once the big boats in the west coast trawl fishery catch their quota – their allocated catch, they will go after other species they typically do not fish hard for, such as crab. Crab is important for Ben, and the other small trollers, but if the large boats start fishing harder for crab, it could wipe them out. Essentially, Ben views this as serious mismanagement.

“This is modern management backfiring on the fisheries. Even the people that are trying to do the right thing for the resource and the fishing communities. I believe a few of those people at least think they are doing the right thing. But, they aren’t looking at the whole picture when they are making these policies. They’re not looking at the reverberations throughout the fleet and the other fisheries. We have to make a living with these boats. If you take away a third of my year, I’m going to try and find that in another fishery if I can, which puts more pressure on that fishery. It throws every thing out of balance and in my opinion that’s what management has been doing to this fishery for the last 15 years.”

So what are the options? He says:

“In terms of managing the resource, it’s not that hard to figure out. What we call the three S’s: Sex, Size and Season. In my opinion, you really don’t need anything more than that to manage a fishery. If you have to throw everything back under a certain size, you are protecting your brood stock. You can’t keep female crabs, you’re protecting the reproductive crabs. If you are only fishing during a certain time of year, you’re not harvesting during spawning season, for example. If there’s other problems, you don’t have to cut out half the fleet. That’s what IFQs does. It consolidates the fleet. I don’t think that’s necessary to manage a resource. Fishing is not a one size fits all. Everybody has different needs.”

Ben is concerned that individual quotas will consolidate the fleet. It is difficult to talk about fisheries management without talking about consolidation, because often management decisions relate directly to it. Consolidation cuts the diversity of a fleet and means fewer boats on the water. For example, five large boats each would have five crew. This, in turn supports 25 families with a decent income. But, five boats also would require less infrastructure, less stores, less support. If there were 30 boats with three crew, that would support about 150 families and would require more shore-side jobs to keep them going. In Ben’s opinion, “It’s way preferable to have more boats, even if they’re not making as much money. It’s better for the community –the more people that are working and the more families that are supported. It’s less people on welfare and unemployment and everything else.” Salmon fishing has typically attracted a wide range of people where some fish all year long and others only fish during the summers, while they have a different profession, such as teaching, in the winters. That diversity is what Ben hopes to maintain with a better management system. Sitting on his boat, gently rocking in the harbor, Ben remembers, “That’s the kind of diversity we had in this fleet. We had guys that are Type A’s who want to be the highliners and drive the biggest truck, and then you’ve got everybody else in between. Once you start doing [IFQ] kind of management, it’s only going to Type A, corporate mentality. What a lot of the hot shots don’t realize is that a lot of them get pushed out too. It changes the whole nature of the fishery and it’s not good for anybody.How fun is it going to be when you are out there and you’ve got no one to talk to on the radio?”