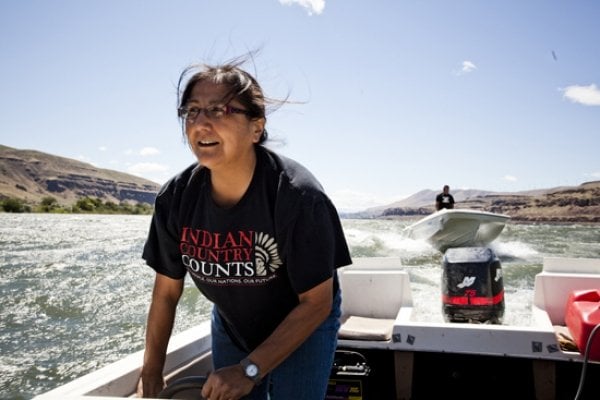 Three brightly-colored nylon tents flap in the mild breeze. A tattered blue tarp hangs from the only shade- and wind-block tree for hundreds of yards. A few American-made full-size pick-up trucks angle in, creating more of a wind-block. With the tall trucks on one side, the tree on the other, and a bank of dry, grassy earth behind, it’s difficult to get a glimpse of the half-dozen Nez Perce sitting on folding camp chairs in the mid-day sun.

Scherri Greene comes out of the shade and wind relief. The west wind immediately pulls her jet-black hair from behind her ears and her eyes tighten to meet the sun behind her narrow eyeglasses. She greets her brother, Gary, and his son as they drive in. But they don’t waste any time getting to the boat ramp to put another round of nets into Preacher’s Eddy. The June hogs might be here.

The Greenes’ ties to this place are over ten thousand years old. But most things on the Columbia River where it cuts through the ancient basalt rock of the Columbia River Gorge east of Portland, are less than a hundred years old. The motor boats, of course. The gil nets. And features as imperceptible as Preacher’s Eddy, a half-mile-long pocket of slow water, or as obvious, impossible, and artificial as the John Day Dam, a few miles upriver. Beginning with the Rock Island Dam in 1933 and ending with the John Day Dam in 1971, the US government has been impeding the natural flow of the Columbia and that creates all sorts of new formations.

The Columbia River and its people, the ancestors of Scherri and Gary Greene, settled near this parking lot a few thousand years after the last Ice Age’s Bretz Floods sent a thousand-foot-deep river thundering down this valley at a projected ninety miles per hour.

The attraction to this place was simple, more fish appeared here than anywhere in the world. During the epic salmon runs of spring, summer, and fall, an estimated twenty million salmon climbed against the raging, undammed waters of the Columbia to reach their native spawning grounds in the gravel beds of tiny mountain streams spread around the northwest.

Just downstream of the present-day Preacher’s Eddy, Celilo Falls was, arguably, the greatest fishing hole the world has ever seen. Exhausted salmon, fattened from years eating and storing energy in the Pacific Ocean, pooled below the ten- to twenty-foot falls. They made for easy fishing. The locals – Nez Perce, Umatilla, Warm Springs, and Yakima Indians – and others from as far as British Columbia, southern California, and the Great Plains gathered to fish and trade here. As Lewis & Clark noted, it was “the great mart” of the country. 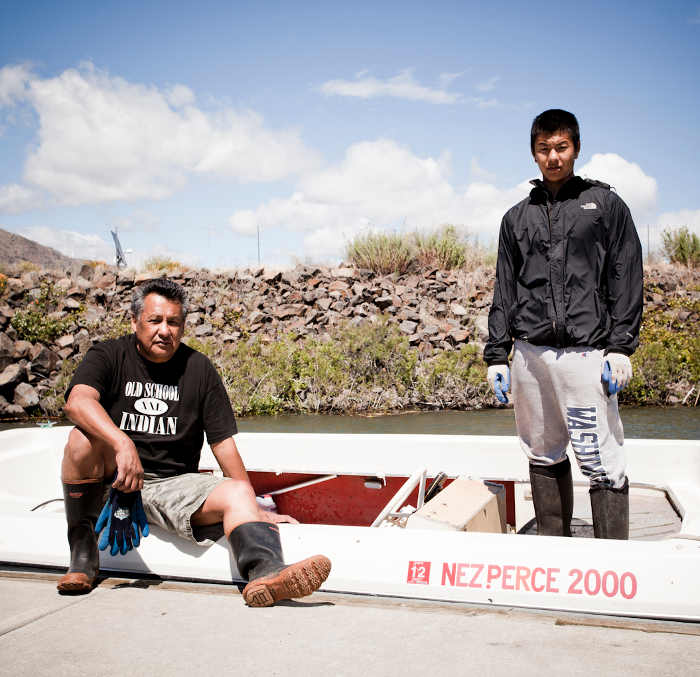 Even when the Anglos arrived, the fishing and trading continued. Native Americans could dry the salmon immediately on the windy, sun-drenched banks. They ground the dried salmon into a coarse powder they called cha lui. This could be mixed with Steelhead oil or blended with berries to add sugar to the valuable protein and make for a food ideal for long journeys.

But then the dams came, adding a final dagger to the Native American way of life that had for decades been ravaged by Manifest Destiny. When the Dalles Dam went in a few miles downstream from Celilo Falls in 1960, the Falls disappeared under twenty feet of water, aka “Lake Celilo.” Fishing, as it had been done for over ten thousand years, ended. And many natives fled out of fear that no manmade wall of concrete could hold back the mighty waters of the Columbia they had seen flood, tumble, and whirlpool its way through the gorge for generations.

Scherri and Gary’s parents were some of the few who stayed. They bought a motorboat and spent their time on the newly slowed waters with the new gil nets, learning where the fish congregated. Eventually, others from the four Columbia River tribes returned to fish. Jesse Greene shared some fishing spots and knowledge, but he kept the best “honey holes” to himself.

Preacher’s Eddy, then, has remained the unofficial domain of the Greene family. Not outright owned; there are just too-few Nez Perce in the area to even bother registering it as theirs, as other tribes have done with other fishing spots. The government, as part of the reparations for the dam construction, built the parking area, boat ramp, small dock, and cleaning station for the Nez Perce. Preacher’s Eddy, like the rest of the river, is open to salmon fishing three or four times a year during the spring, summer, fall, and occasional winter (steelhead, sturgeon) seasons.

For the most part, the tribes operate on their own, using most of their salmon take for commercial purposes and personal and ceremonial needs. But in 2003, the fisheries agencies predicted large runs of tule or dog salmon. The tribes might only get $.25 per pound with such over supply. So they asked how they could make the best of the situation. They’d done value-added product before – salmon items similar to the cha lui – but never in a regulated fashion.

Tule is a pale, fall-run version of Chinook and lacks the rich flavor of its spring-run Chinook cousin and the King salmon. It needs some flavor help to be marketable. Scherri and others associated with the Columbia River Intertribal Fisheries Commission came up with a way to crumble the dry tule salmon into a bacon-bit-like texture. They added sodium nitrate as a preservative and some spices and it became a marketable product. With support of Ecotrust, Portland’s Food Innovation Center, and a Community Food Project grant, Scherri and 400 other fisher families from the four Columbia River tribes used the Food Innovations processing kitchen in Portland to bottle and label hundreds of the dried tule-bits jars. The Food Innovations Center offered a perfect place to experiment with the product since it’s purpose is to create food products that can be marketable. They often work in the for-profit and entrepreneurial world, but occasionally they team up with grants and grant recipients on projects such as the tule one. 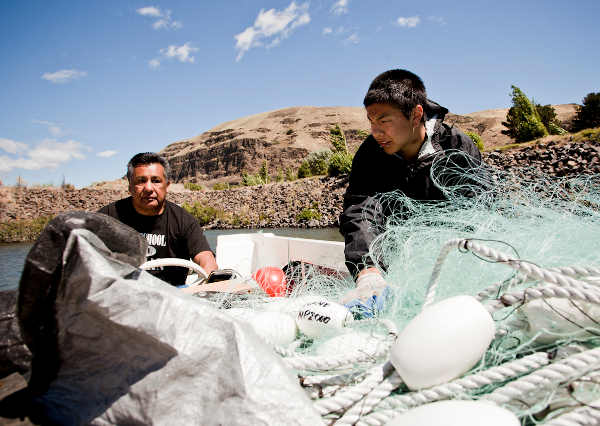 The program was successful and earned extra income to cover the loss of the tule’s market value in that year. The tribes haven’t made the product since. Scherri brought out two jars of the tule bits from her truck. No labels, just the dried, salted salmon pieces like reddish-pink, coarse, bath salts.

She stowed the jars back in the door of her truck and walked down the ramp to her boat. Gary was teaching his son how to set gil nets. The teenager had the overwhelmed look of someone learning something physically, at a fast pace, taught by an elder. The oldest form of learning – imitation.

As their boat puttered out of the calm water of the dock and throttled into the white-cap-whipped force of the Columbia River and Preacher’s Eddy, another truck pulled into the parking lot. Four boys age twelve to sixteen jumped off nets stacked four feet high in the truck bed. They pulled the nets onto the hot parking lot asphalt and began untangling them as their brothers and cousins and dads and uncles set up another mini camp of sun-faded North Face tents and a wind block made from a hand-woven blanket.