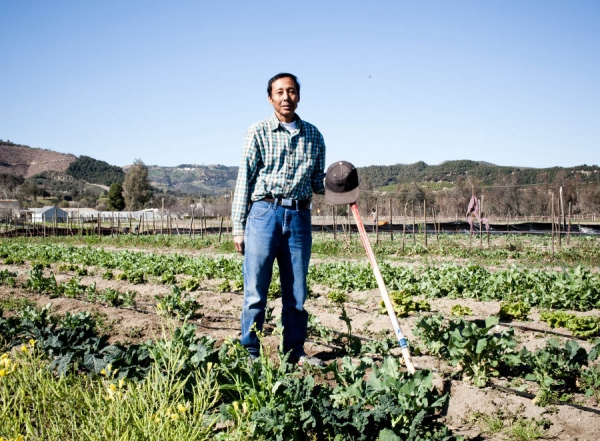 This is remote for southern California. It’s quiet. Roosters crow. Birds chirp. A few cars drive by. The International Rescue Committee’s Pauma Valley farm began here in 2012 on what was a defunct non-profit center.

Bilal drives an hour to the farm most days of the week since he works with the International Rescue Committee (IRC) as a leader of the Somali-Bantu group of refugee immigrants that arrived to San Diego’s City Heights neighborhood between 2004 and 2006. For Bilal, the drive is not ideal, but considering what it took to get him to America and then to a job on a farm, an hour driving his Honda Odyssey mini-van is nothing.

But Bilal became the de-facto community leader of the Bantu. So he spoke with the elders, mostly women since many of the men were killed or stayed behind. The consensus was that the Somali people needed to farm, to involve their children in agriculture, and to have access to healthy food. 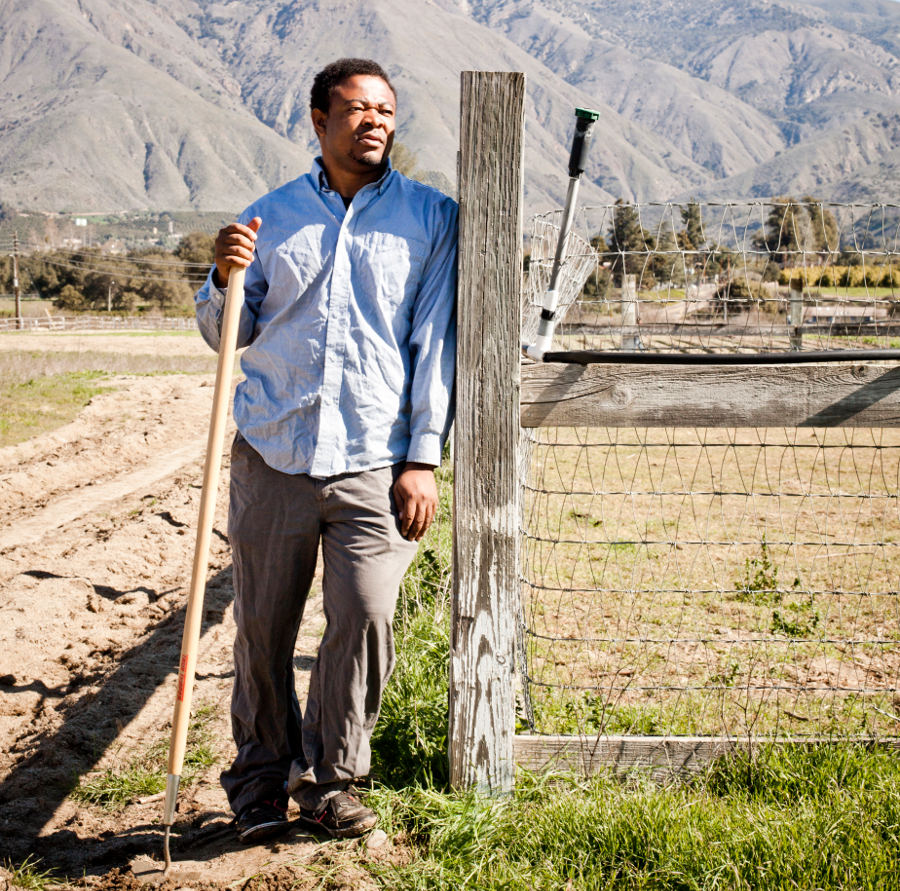 At about the same time Bilal was meeting with the elders and figuring out ways to improve their community’s situation in San Diego, the IRC was taking over a USDA’s Community Food Project (CFP) grant that had been intended for a farmer’s market begun by a community development corporation. The market had failed, but with two years left on the grant money, the USDA told the organization to find a different use for the funds. So the CDC asked the IRC, who had subcontracted on the farmers market attempt, to take on the funds and take them in a new direction.

The first thing IRC of San Diego did was ask Bilal what the Somali-Bantu people needed. Bilal said land, a farm, food-growing resources.

So San Diego got an indoctrination in urban farming. Of course, urban farming had spread throughout the city for decades, but never on a formal, permitted scale. IRC and the Somali-Bantu essentially rewrote the policy around urban agriculture on their way to starting the New Roots Community Farm on two acres of the most densely urban district in the city. The Bantu began growing for their families and soon other refugees joined. It became, as so many community farms do, especially for refugee populations, that essential shared space and reconnection to land and their agricultural traditions.

As the farm took shape over a few years, the regeneration of the agricultural roots for the refugees grew stronger and more widespread. The IRC started the City Heights farmers market in the refugee community. But the energy moved onto the national scale within IRC. They began a new roots farm in Phoenix, then Salt Lake City, and they now have fourteen nationwide. It’s part of an expansive view toward the refugee communities. IRC knows that it can’t just focus on the refugees, but rather must think systemically and address entire communities.

The urban farmers market has become a tell-tale sign of gentrification and increased costs of living. In City Heights, the IRC didn’t want to deter neighbors from the produce being sold at high-end prices. So they implemented food stamp swipe machines and offered matching incentives for food stamp purchases at the market. They don’t brandish the certified “organic” brand that often translates to “expensive” for some people. And they have little price inflation. A bundle of greens can cost $1. The mission was to provide nutritious, affordable, culturally appropriate food to the community. 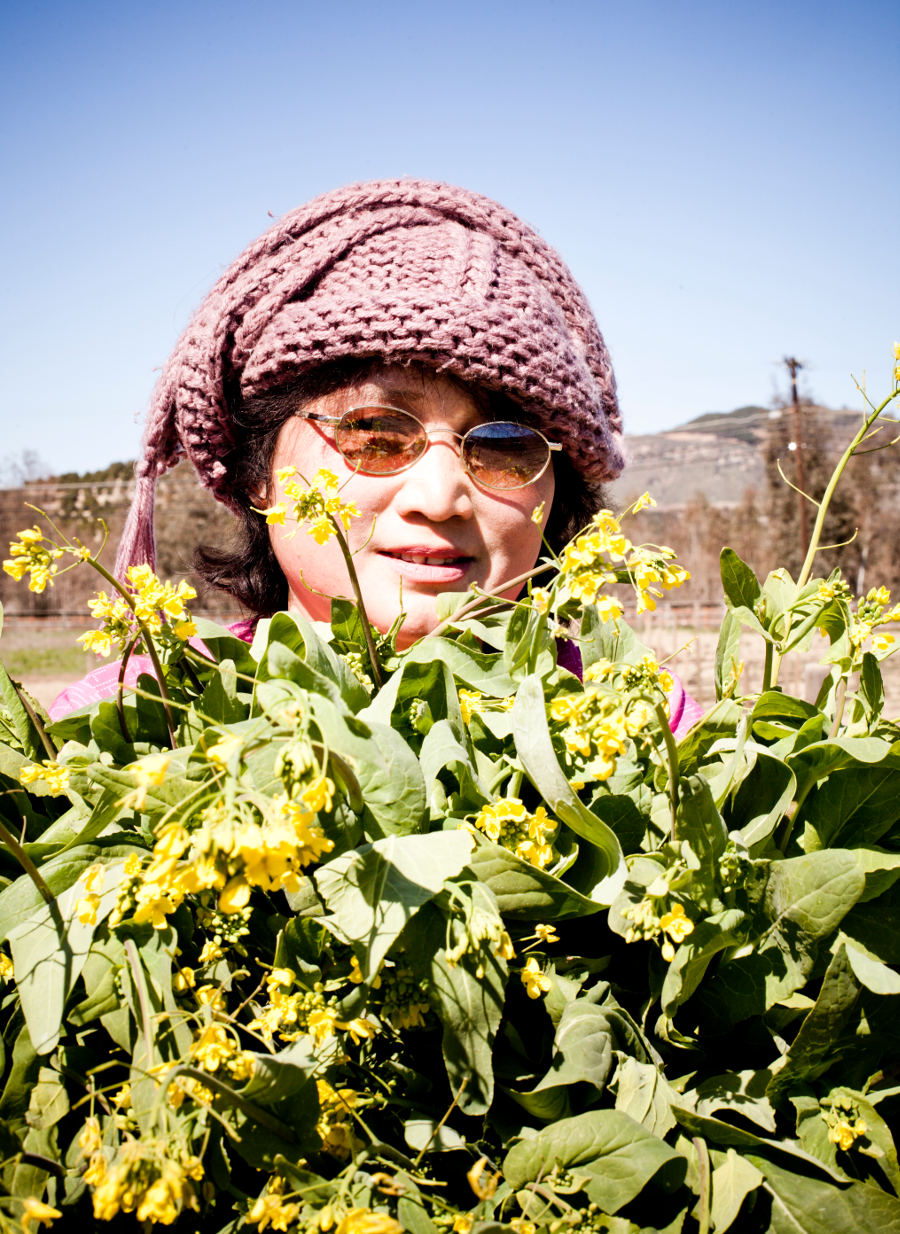 But they also had community growers like Bilal who wanted to be farmers and make money doing what they did best. So they needed more land. Thanks to subsequent grants, including a second CFP, the IRC of San Diego was able to secure twenty acres in the Pauma Valley. They designed a program to incubate small business farmers who want to grow on a working production scale.

It’s pretty simple. The different ethnic groups – Burmese, Somali (the seven “Bantu Mamas”), Ugandan, Iraqi – have separate plots. They have their own tools and they share the washing and packing station. IRC helps market for the City Heights farmers market, where some sell, and also coordinates the CSA and restaurant partnerships.

The whole thing is young and growing. Forty new small business farmers will join the crew this April, taking a shot at making a business out of growing healthy food. The IRC says they’ve been approached by Chipotle to provide produce to the popular food chain. And that’s where the refugee farm comes full circle. As Bilal describes it, a major push behind having a farm for most of the Bantu was to connect with the land again, and be able to produce something that could support their community.

There’s an amazing, and somewhat un-American sense of keeping things small, growing food for the families in their neighborhood, that seems to motivate refugee farms. To call that quaint would be taking an American view where the success of business relies on the ability to scale up. So Chipotle might look like a big contract, a great new account. A boon for the business. But then the food wouldn’t be staying in the Bantu community. It’s hard to say whether that’s what they want.