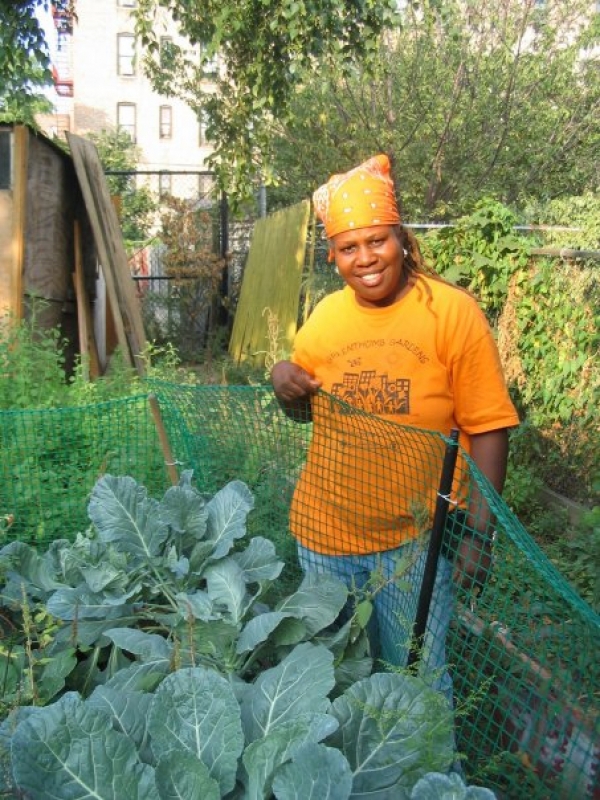 Karen Washington’s community did not have access to fresh, healthy food, so she started changing that, one garden at a time. Karen has farmed in the Bronx for over 20 years and was an original member of La Familia Verde Community Garden Coalition, which consists of five community gardens. Karen is also a member of a new farm: La Finca del Sur and serves on several Boards.

Karen and I meet at a pizza parlor in the Bronx, down the street from La Finca del Sur community garden. She sells some of her bounty to the parlor, so people in her neighborhood can enjoy fresh food from their neighborhood garden. The money earned goes straight back into growing. Karen is straightforward and begins with the basics.

She says, “I grow food. I feed people – body and mind. We started to see the health problems and the lack of fresh produce and so, at first, we asked Greenmarkets1 to help out, but they said they didn’t have any farmers, didn’t want to come to the Bronx or were scared to come to the Bronx. So, we decided since we were already growing food, let’s form our own farmers’ market. That’s what we’ve done.”

New York City has gone through tremendous ups and downs, shifting racism and varying degrees of gentrification. In the early 1970s, the city had over 15,000 vacant lots as the middle class was migrating to the suburbs. People believed houses were being torched for insurance claims. As a result of the desolation and empty lots, low-income neighborhoods began to see an influx of drugs and crime. Karen lived in the Bronx then, as she does now, and she could not just sit back and watch the deterioration of her community without doing something significant. There were two things people had to do, number one, they could move, or number two, take back their community. A lot of people gathered together to turn those empty lots into community gardens and that’s how it started. It was basically on squatters’ rights, because no one was claiming it. The city didn’t have the manpower to get in there and clean up. It took the power of community to gather together, brick by brick, mattress by mattress, tire by tire, to clean the empty lots and start growing food. Food that meant something, that meant hope, that meant survival, that had a connection to where people came from. That’s where the community garden movement really started. People think that this urban agriculture phenomenon that’s happening is new and trendy. I tell people not to forget the people there from the beginning.”

There are still vacant lots alongside the train tracks and adjacent to housing projects all the way to the Bronx on the 5 train. At the 138th Street station, across the street, there is a vibrant sign announcing the Finca del Sur garden. The garden occupies a once vacant lot. Even though the growing season was over and brown leaves cover the ground, the garden still transforms not only the physical appearance of the neighborhood, but also the spirit and health of the community.

Despite many areas of New York City undergoing gentrification, the Bronx remains one of the poorest boroughs of New York. The latest unemployment statistics lists the Bronx as the county in New York state with the highest unemployment rate, at 12.8%.2 The median income of a family of four is less than $20,000. It is within those streets where communities often feel neglected and powerless.

Let’s face it, food is political: where it’s distributed, who has the rights in terms of zoning, who is able to have loans. Food is politically tied; who gets the best vegetables and who gets the leftovers. The area that I live in is one of the poorest districts in the Bronx. We’re surrounded by an epidemic of fast food and fast chain restaurants and there are no healthy food stores. Many of the produce that you see in our supermarkets travel from far away, are moldy, not fresh at all.”

Right next door to Karen’s community is Hunts Point Terminal Market. Hunts Point is an enormous warehouse where produce from across the country, and around the world, enters New York and is then transported to over thirty million consumers. Neighboring communities receive the leftover fruits and vegetables after they find their way back into the Bronx. When Karen describes Hunts Point to me, I can feel her anger and determination to improve her community. 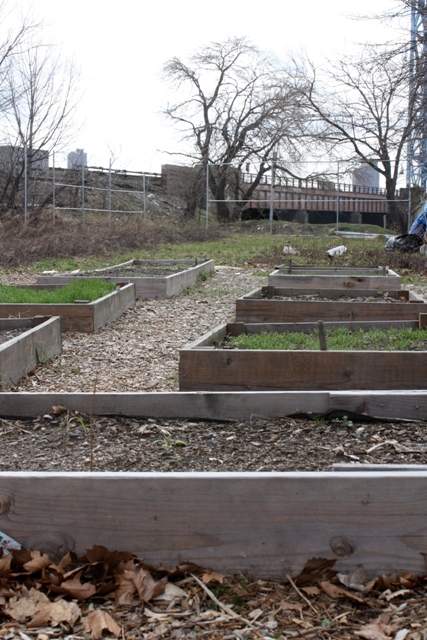 Where else, what other neighborhood would that happen? Could that happen in an affluent neighborhood? Heck, no. But it’s happening to us. So, food is political. Those that have affluence and money and connections do much better than those that don’t. Food and housing and education are all tied into one.”

The challenge is how to educate people about that. Karen is a physical therapist, so she talks about health as connected to daily lifestyle choices. Karen lets people in her community know there are options and resources to improve the quality of life, but it takes hard work to change the current norm.

How do we open up the dialogue, open up the doors to make it an equitable food system that transcends color, that opens the opportunity for all people, even women farmers, to farm? All I want is fairness. All I want is the opportunity for people who have been disenfranchised to be part of this food movement and not to be a statistic or pawns in people’s projects. For too long I’ve seen outside organizations use the statistics that they find in low income neighborhoods to get their grants, but yet they don’t empower those communities of color to take on those issues themselves. What happens is that once the project is over, the community is still left poor because you haven’t transcended that project. You haven’t made the people the stakeholders. They have been the bystanders. Until we become the stakeholders, I am going to challenge.”

Karen’s passion, determination and political savvy make it clear she is not one to give up the fight. She will succeed.

“I’m on this crusade of food and social justice and if I make people feel uncomfortable, that’s good because then I’m doing my job. I’m on a journey. I’m riding the wave. As I continue to grow food and really give thanks to elders, the people that came before us, I will continue empowering people to have a say and have a stand for what they feel is right and just. End of story.”