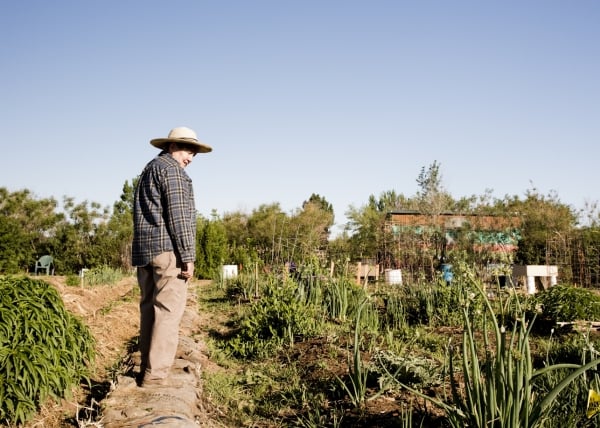 Eventually, the City found a suitable tenant in the family-owned Rasband Dairy. They grow alfalfa for their cattle on the majority of the land. But the Rio Grande Community Farm laid a stake in the fields, as well.

Harriett used to bike along the acequia trail when she first moved to town from Chicago. A psychotherapist and educator, Harriett had a community garden plot for years while living in Chicago. She needed a place to grow in Albuquerque since she’d moved into an apartment. She found the upstart Rio Grande Community Farm and rented a plot in the community garden section.

Around the same time, Patrick, a first grade teacher at Alvaro, saw an opportunity across the acequia. Nothing pleases first graders more than the chance to dig in the dirt, and Patrick appreciated the chance to teach outside the classroom. He asked for a small chunk of the community garden for use by the students. They planted wild roses, maximilia, sunflowers. They’d scurry around the sometimes overgrown rows along with roadrunners and geese and the occasional Sandhill crane.

Today over 100 entities use the four acresof community garden. From families ($35/year per row) to co-ops to group homes, including the Association for Retarded Citizens. A section is set aside for wildlife crops. 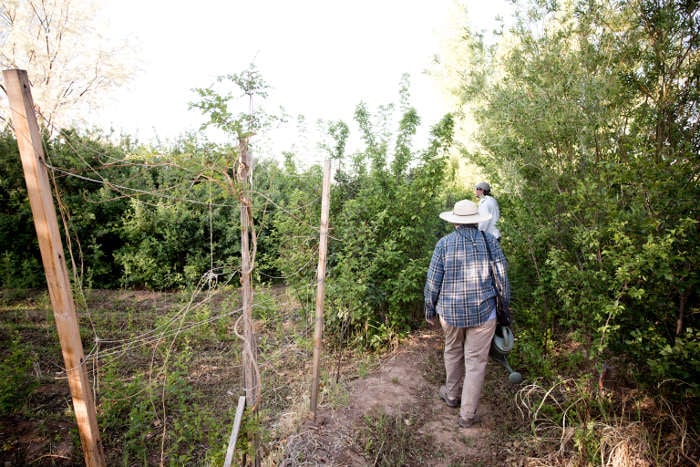 2013 has been another dry year and the acequia water use is being restricted. A dozen or so of the community garden rows lay fallow this spring. People are nervous that they won’t have water since the city bought the land, but not the water rights. In New Mexico those go for a pretty penny. So the community and school garden sit at the low end of the water rights pole. Patrick retired last year and, with the scarcity of water, the elementary students won’t be coming this year.

But Harriett still comes out. She’s dropped two fifty-gallon barrels at the ends of her rows and she uses the water for a slow-drip irrigation that has worked in past drought years. A slice of Albuquerque still grows food for its citizens, and the students will be back. First graders can’t let a perfectly good patch of dirt sit untouched without someone bringing them back to get their hands in the dirt.

Old Rio Grande Community Farm has established an organic community garden on two acres of Los Poblanos Fields. For a small fee, area residents can grow produce on two 80-acre rows for their own use or for donation to a local food bank.

In 2001, a one-acre garden was established at the Alvarado School adjoining Los Poblanos Fields. The garden includes crops for an annual school feast and to feed wildlife. The garden has become a regular part of many teachers’ curriculum. A 2001 “Professional Development Institute” for teachers used the Alvarado School garden as a model for educational programming.

Through the community gardens and other projects, RGCF annually plants about ten acres of food crops for people. Another 25 acres are planted with crops for wildlife such as migrating Sand Hill cranes and geese. A mile of new permanent hedgerows provide food and habitat for songbirds and other animals. 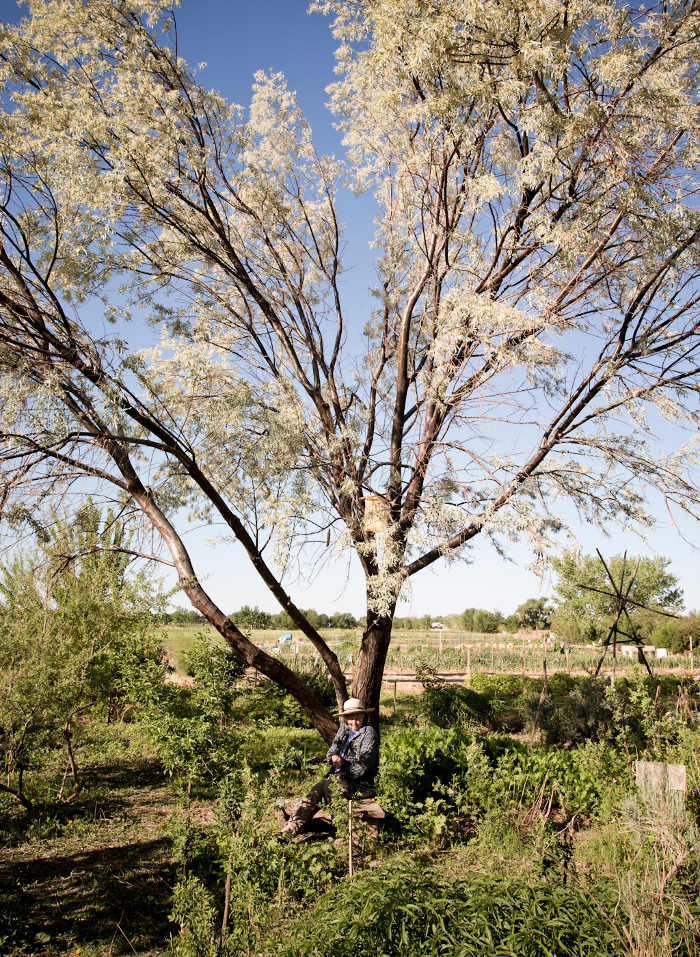 The RGCF’s annual Maize Maze covers more than eight acres of Los Poblanos Fields with two miles of hand-cut paths through a cornfield. The maze attracts as many as 12,000 visitors each year, including school and community groups. Informational signs in the maze teach about native wildlife and the importance of sustainable agriculture. RGCF has created a curriculum resource packet to accompany the maze and opens the maze at night twice per season for Moonlight Maze walks. RGCF has also organized a Harvest Festival, Corn and Chili festivals, and a Corn Ballet in conjunction with the maze.

The Maize Maze and many other RGCF projects have provided opportunities for many local volunteers, interns, students, and community members to become involved in community gardening projects. Some regular projects include a RGCF service learning curriculum for farm interns, and volunteers aiding in deliveries to the food co-op and staffing the farm stand at the farmers’ market. 500 to 1,000 volunteers work at the farm annually.

RGCF spearheaded an advisory committee to build on the Albuquerque Food Security Network and explores relationships with a variety of possible project partners on food security and community garden issues. Further outreach into the community is done with semiannual newsletters and publicist local media.

In partnership with the city of Albuquerque, the project will make irrigated farmland within the city available to low-income residents for the purposes of food and farming, education, and networking, policy, and public information.