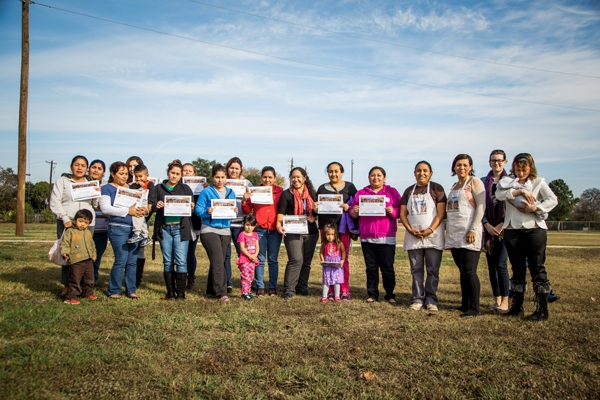 While the students at Pecan Springs Elementary School in east Austin went through their mid-day class routines, eleven women graduated in a small portable classroom beside the playing field. Each woman was called up to the front of the room to receive her diploma. The rest of the class applauded between bites of food.

Lorena, has been working for ten years with Sustainable Food Center (SFC) of Austin’s The Happy Kitchen/La Cocina Alegre® (THK), a program of community-based healthy, affordable cooking courses. She’s seen hundreds of women graduate with the knowledge and confidence to use easily accessible ingredients to make healthy meals for well under $2 per serving.

Lorena’s husband left Mexico for Texas before she did. He’d call her and say he missed her, of course, but that he really missed her when it was time to eat. She always cooked for the family in Monterey. 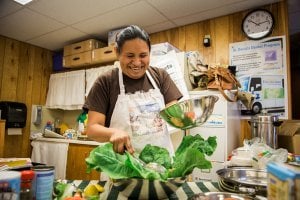 “We found that the middle school age is when the kids are pulling away from parents,” says Joy Casnovsky, THK program director. “It was difficult to get parents involved in a garden or cooking class. After we finished that three-year pilot, we shifted to elementary schools where we saw much more involvement from the parents. If you get a parent involved when the student is in first grade, you have the chance to work with them and their parents for the next five years.”

THK began in the late ‘90s when SFC, along with other social justice organizations and researchers around the country, began to recognize the connection between health-related disease and food security. It was a bit of a rocky start, especially in the Hispanic communities where women like Lorena struggled to understand the English-speaking chefs. SFC recognized the disconnect and eventually shifted the approach to train women like Lorena to become the Facilitators. The new approach proved successful and now Facilitators are compensated with a stipend, though they can also choose to volunteer their time.

The classes took off, mostly by word-of mouth. Lorena has led as many as ten in one year.

Forty-three Facilitators lead twenty-four six-week courses throughout the year, plus numerous one-time classes. The student limit is capped at 25. They are now offered at churches, recreation centers, schools and in the new teaching kitchen at SFC headquarters. The HEB grocery store, a community-involved company, provides funding and offers break rooms for use by the cooking classes. Perhaps most importantly, on the second Saturday of each month, HEB offers free health screenings and they allow SFC to host a table to recruit newcomers to cooking classes. This past year, HEB distributed hundreds of THK flyers at registers. There is now a waiting list for the courses. 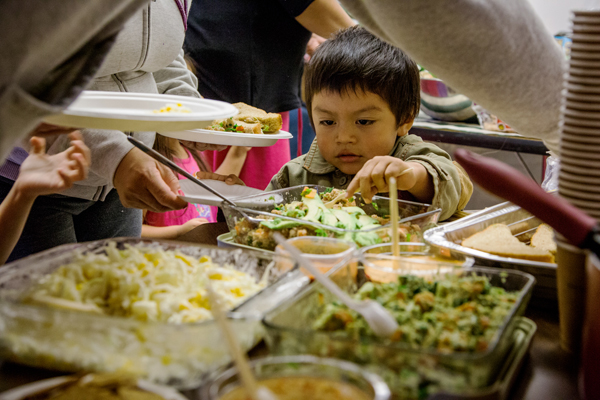 The demand has spread into more market-rate populations. Joy and the SFC crew realized a need for fee-based cooking classes ($30-40 range) open to the public. In their modern kitchen space, SFC now offers anything from tamale classes to how to utilize a whole chicken from the farmers market. “We get people who want to sign up for a CSA but they don’t know what to do with all the veggies,” says Joy. “So we have a class for that. It helps the customer prepare healthier food and it brings a new consumer to the farmer. We want to meet people where they are, whether they’re buying from HEB, the farmers market or a food pantry. We just want to help people learn to cook and build that confidence.”

The small classroom behind Pecan Springs Elementary School is ringing with confidence.