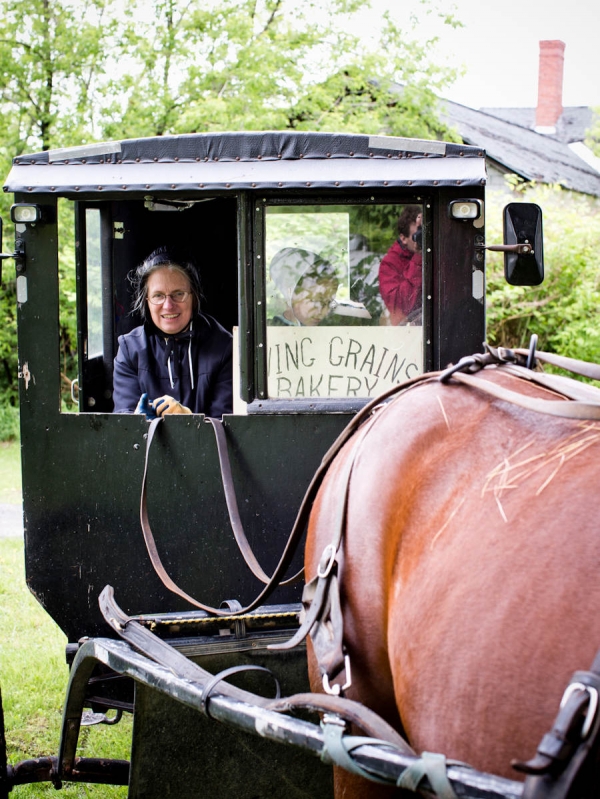 Hurricane Andrea drags its wet, car-wash stroke across Maine. The usually black, clear Sebasticook River running between town and the small, bucolic campus of Unity College flows faster and browner after two inches of overnight rain. The big tent erected for the annual Unity Barn Raisers small business fair at the Unity Community Center sheds more water onto the grass. It seems like the forests and fields will explode in wet, lush greenery, like a Chia Pet in a steroid laboratory.

Maine, especially southern central Maine, is full of tiny rural towns like Unity. Two-lane country roads barely travel ten miles before intersecting at a stop sign and a cluster of old clapboard or brick buildings thawed out for another run at a hot summer. But Unity is different from most. Unity, once on the brink of small-town America collapse – the core agricultural industry, dairy farms, couldn’t keep up with the big boys in Wisconsin and manufacturing jobs had long-since shipped overseas – has been putting to work some simple, but big ideas to save itself from within.

A lot of the work and small business success stories are on display under the big canvas tent that the fire department helped set up in the morning rain. There’re the expected craft tables of hand-sewn grocery bags and scarves and handmade jewelry, but there’s also Tim Downer, a salesman for Unitel. He wears a yellow collared Unitel shirt and a Unitel hat. His pre-teen kids hang around the table. Unitel is one of the oldest and only family-run landline and broadband servers in the country. They’ve been operating in Maine for over 100 years. Downer says there are only ten households in the county that they haven’t been able to access. Not that everyone has the Internet in their homes – it’s still expensive – but the lines are there, which is more than the big telecom companies can offer.

Another table holds tri-fold displays of the 25-mile trail system that transects the fern-floored woods around Unity, including the winding wooden boardwalk and bridge that connects town to the college campus. And a stone’s throw away in the tiny downtown hub of Unity, a few small businesses lease or own buildings recently rehabbed back to professional life. 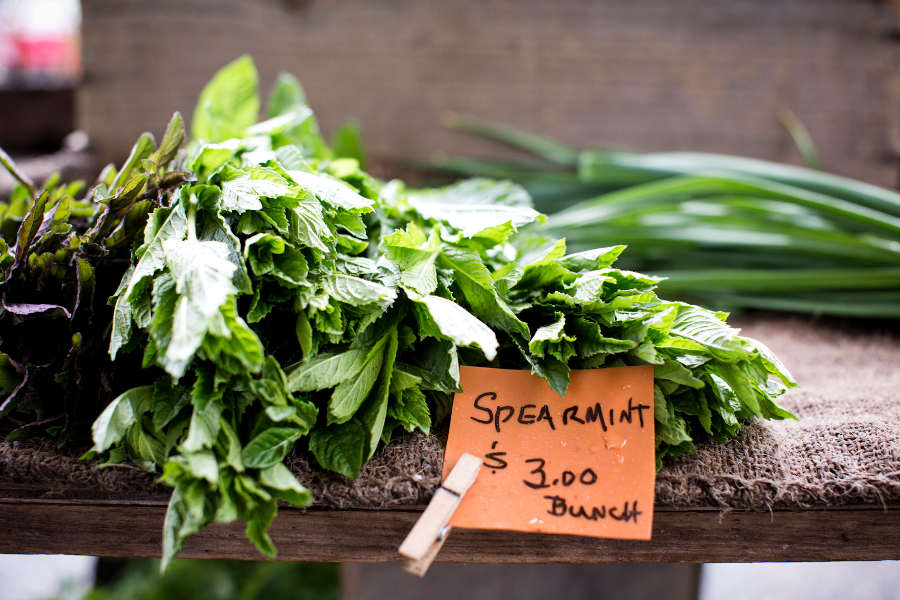 A group called Unity Barn Raisers, a non-profit organization with a mission to revitalize the tiny community of Unity and its surrounding Waldo County, is behind most of the action in town. It’s not a Community Development Corporation or an individual foundation. It’s simple grassroots activism that jump-starts and connects small-bit, local capitalism. The town and the outlying county residents need Internet and phone and maybe cable. So they encouraged Unitel, the state’s most trustworthy, mom-pop telecom provider to open up shop in town. UBR launched a program to facilitate and incentivize weatherizing the homes of low-income residents with back-breaking heating bills. Some of the old storefronts and offices in downtown were abandoned and in disrepair, so they remodeled them.

And UBR also got involved with the food security scene when they were awarded a CFP grant in 2004. The grant intended to incorporate more local producers into the food bank program, to empower stronger connections between consumers and producers, and to encourage entrepreneurial farmers and markets. UBR launched the weekly, seasonal farmer’s market in 2004. They also began Community Farm Share, a program to make food shares, like CSA baskets, available to certain community members for free. They brought the idea of subsidized CSA shares to small towns in the county, encouraging the county to collect funds to support the project.

The community farm share program got its start with UBR and the CFP grant, but programs like farm shares teeter along a tight rope once the grant money for supplementing it runs out. The town of Unity is as good a place as any for the program to work. The college is temporary home to 500 students, most of whom come to study sustainable agriculture, animal husbandry, and game conservation. That combination of mindful professors and energetic students provides a level of expertise and a volunteer-prone, academic-credit-not-money-earning work force uncommon in most tiny rural towns. But even an idyllic, diverse, agricultural place like Unity needed a bigger dose of resources to keep the farm share project alive.

Maine Farmland Trust (MFT) organized fifteen years ago. Like most land trusts, MFT wanted to preserve land from development through the creation of easements and trusts. But MFT focused specifically on Maine’s rich, but threatened farmland. The hired Mike Gold in 2010, just as they took a new tact in the effort to preserve land.

“They had started a new program when I came on,” says Gold. “It was called and ‘farm viability,’ and the idea was that it’s not enough just to protect farmland, we also need to ensure there are ample opportunities for farmers to be successful on the land. We saw an opportunity to take some community food security work to build economic opportunities for farmers and increase sales into the farm economy.”

Unity and UBRs farm share program offered a perfect opportunity for MFT launch a pilot project. Essentially, they partnered with UBR’s existing groundwork and expanded it. Eligible individuals signed up to receive discounted food shares from local farms. With MFT’s heft and emphasis on expanding economic opportunities for farmers, they were able to purchase the farm products at full-price, sometimes direct from farmers, other times, especially in winter, aggregating from a collective of farmers. They also created a voucher system for customers to buy direct from farms (common in the summer), offered business training services to participant farmers, and helped them secure and use more land for agriculture.

The pilot project is becoming a full-fledged model for other farm share programs in the state. The farmers market EBT swipe machine that Mike Gold helped to start in Unity in 2010 has proven successful and MFT has helped other farmers markets around the state to employ EBT machines. 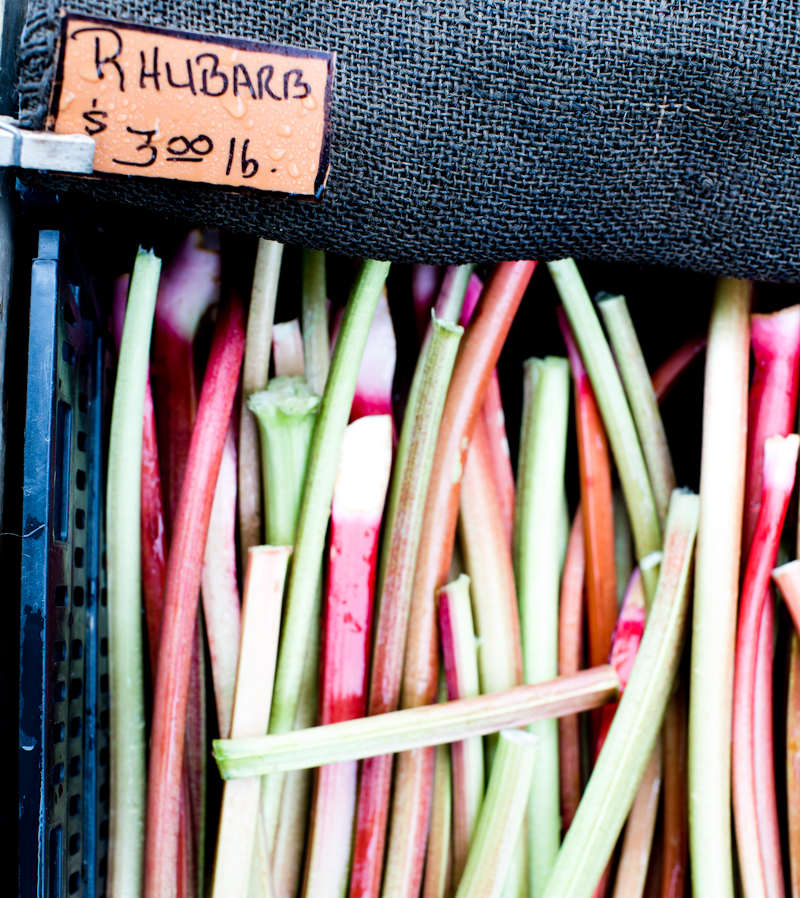 In Unity, the ideas keep growing. An abandoned, early 20th Century schoolhouse had been crumbling in on its beautiful bones for years. The forest seemed poised to reclaim the wide floorboards and clapboard wood siding, its paint nearly completely weathered off. But MFT saw a food hub and renovations began in spring 2014. By early 2015, the schoolhouse will be the permanent home for the community farm share program. Farm goods will be stored (walk-in refrigerators and freezers), packaged, and distributed year-round. Rather than just serving low-income residents, the Food Hub will open a multi-farm CSA program for the general public. There will be a kitchen for food processing and life-extension. The local food pantry will have extra storage in the Hub. The hub ups the ante for consumers and for the farmers who can now reach more customers.

The Food Hub will be able to wholesale to institutions like schools and can work with the statewide Good Shepherd Food Bank to store extra farm produce, thus offering another sales route for Unity-area farmers.

For five years Veggies For All (VFA) has been growing food on a few acres on Unity College campus and vacant lots in town. Founders Tim Libby and Sara Trunza rely on volunteer farm support and the local food pantry to distribute thousands of pounds of produce to 1,500 food-insecure residents. For years, UBR had been their fiscal sponsor for grants. Now, with the Food Hub opening within a year, VFA has asked UBR to let them go so they can partner with MFT’s Food Hub. The easy handover means VFA will have a permanent home at the Hub for storage, cleaning, and distribution.

So this winter the snow will blanket the farmlands again and cover the thin summer trails that snake through ferns. The roof on the VFA greenhouse at Unity College will groan under the weight. And some people will be more hungry and cold than others. But hopefully by the time the ground thaws and the seeds go in, an old schoolhouse will be a home to fresh food and residents who might have remembered the school as a child will return to it once again as a vital community hub.