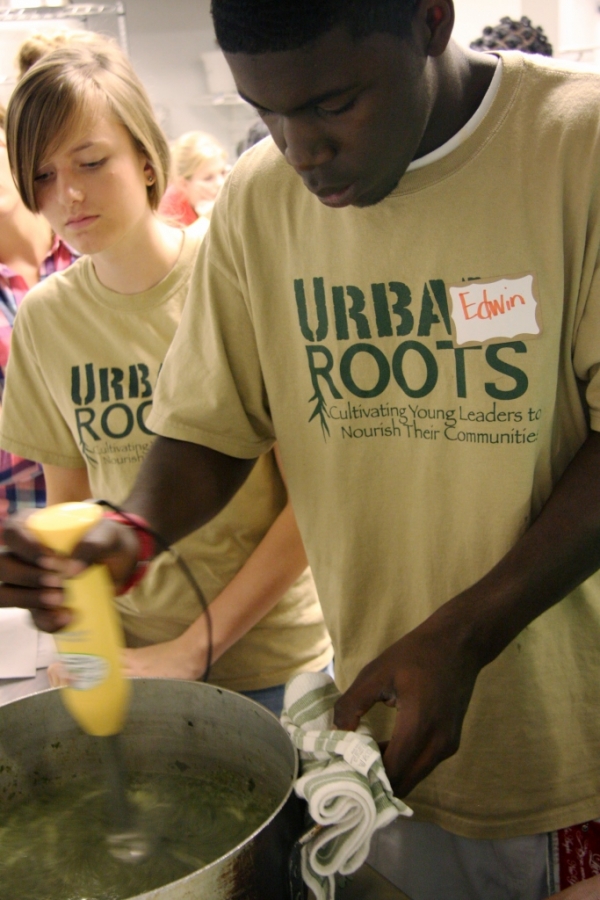 Urban Roots did not originate as a response to gentrification, but these rapidly changing socio-economics defined the landscape in which Urban Roots began, thanks to a three-year USDA Community Food Project grant. Max Elliot, executive director and co-founder, wanted to build on the existing youth job skills and service organization, Youth Launch. Elliot saw a radical theory of change in Youth Launch’s approach: engaging young people in long-term, group-based service through paid internships. Urban Roots would add food and sustainable agriculture to that structure. By the time Youth Launch shut its doors in 2011 Urban Roots was already up and running, grounded in its four pillars: service, life-job skills, healthy lifestyles and sustainable agriculture.

Urban Roots aims to use the lessons of a healthy food economy to teach youth job skills and life lessons through service on its 3.5 acre urban farm and at the organization’s farmer’s markets. They donate 40% of their produce to a local soup kitchen and food pantry program and distribute the other 60% through the farmer’s market, CSA and wholesale.

The Urban Roots farm is located in east Austin, the side of town most susceptible to the gentrification creeping out from the urban center. Urban Roots youth are not exclusively from east Austin; they are geographically and racially diverse, though a majority come from households that qualify for free/reduced lunches and many are east Austin residents. Breez jumped at the chance to work in the challenging, diverse realm of food growing, food marketing and community service. He grew up in east and south Austin, moving often. With Urban Roots he found himself learning a skill and a subject that connected him to people from across the city.Breez Smith found Urban Roots through his high school, Gonzalo Garza Independent High School. Smith was seventeen, coming out of a crazy, drug-riddled part of his life. He arrived late to an outreach meeting at the high school led by Urban Roots’ Max Elliot. Smith was immediately drawn to Elliot’s passion for food and his program that offered a paid job and high school credit while working outside on a farm.

“I’d never eaten many vegetables before Urban Roots,” says Smith. “It opened my mind up in that way. We can all connect through food. There’s always someone in every family – a grandma, maybe – who’d grown food, so you can talk to people about it.”

The Urban Roots youth internship also exposed Smith and his fellow interns to the wider realm of Austin. Smith had seen the effects of gentrification. Just recently, his friend’s grandmother’s house was razed, replaced by a parking garage. “That house had all the history and now it’s used seven hours a day for cars,” he laments. “I can see both sides. It’s bringing money to the area, but it’s detrimental to the people who’ve been there to stick around as the city built up. Two or three years ago, people were afraid to go to east Austin. Now they’re moving in.”

“One organization can’t necessarily stem the tide of gentrification,” says Max Elliot. “That’s a wildfire created by conditions set in place decades ago. Some of our young people that we work with are getting priced out of this community. What might happen is that our farm might be too close in and the youth that we’re meant to serve will be forced further into the suburbs.”

Elliot is cautious in speaking about gentrification. He is white. Most of the board is white. Years ago, Elliot was the only white staff member. Now, the majority of staff is white. It’s hard to say whether that’s a reflection of the overall Austin trend or just the winds of change that blow through any company or non-profit community outreach program. Urban Roots was founded after a rigorous, patient assessment directed by a diverse advisory council from the community: local educators, farmers, hunger advocates and a public health officer. It listened to the neighborhood voice and identified partners that aligned with Urban Root’s four pillars.

That experience goes beyond participating in growing food. It’s about gaining the social and emotional skills vital to success in school and beyond.

A program like Urban Roots can take advantage of a burgeoning high-end food movement as they work with a low-income community of youth. Breez Smith remembers big-time chefs visiting the farm for workshops, nutritionists offering classes, and his internship has led to an environmental education job and a position with a company designing disaster relief shelters.

“I remember moments when we’d lead farm tours for visitors. We were able to impart knowledge onto a doctor who had no idea about growing food. Even if just a handful of the kids in the program get that sense of leadership, then that ripples out into the community. Another buddy of mine from the program, we’re in a hip-hop group and we’ve got tons of opportunities to spread knowledge in the community. There’s a lot of momentum to spread this word about getting healthy. We grew something like 35,000 pounds of food in a few months! It’s beautiful and it all happens out there with the bugs and the dirt!”

Programs like Urban Roots can find themselves operating in a tense zone. There can be mixed messages around this new food movement, especially at graying socio-economic boundaries. All local food is not always just food. The disparities between the hobbyist community gardens and boutique food trucks serving farm-fresh wraps in one neighborhood and the social justice programs trying to incorporate sustainable food and healthy diets into a youth empowerment program in an adjacent neighborhood illuminate a major challenge for places like Austin where a lot of change is happening at a very fast rate. “I’m very careful of the messages we use around the youth,” says Elliot. “If we start to say the only way to go is the local food system, that the industrialized food system is bad, then we create a sense of inadequacy for our youth interns if they are dependent on non-local food in their homes. The last thing we want to do is to force beliefs onto young people. The power comes from their experiences and from the inspiration our youth can bring to the community and the local food movement happening within the Urban Roots setting.”

“We are more than a food organization,” Elliot continues. “We want to build healthy food ambassadors and we use food as a tool to give youth voice, confidence, 21st Century job skills and an ability to articulate their experience.”For Elliot, Smith and the Urban Roots crew, seeing that disparity between the food worlds happens at every farmers market when the Urban Roots youth staff sell vegetables they’ve grown in their east Austin neighborhood to predominantly affluent Austin consumers. There’s aspiration and inspiration happening on both sides of that fresh food table, and it cultivates a conversation for staff and youth to talk about the disparities present within their fast-growing, diverse cityscape. The goal for programs like Urban Roots is never simply to grow food, rather to nurture youth and help guide them to be our next leaders and tackle the challenges they witnessed as formative youth.