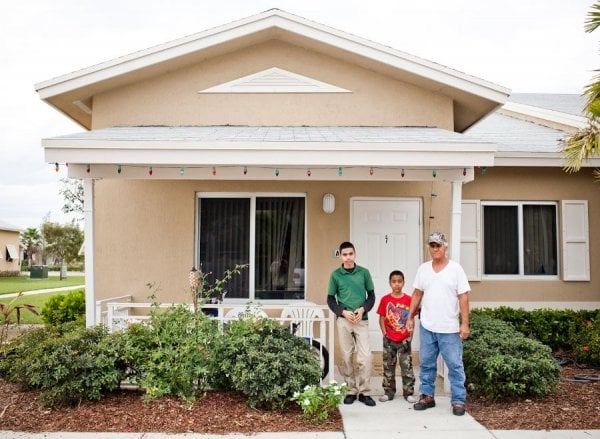 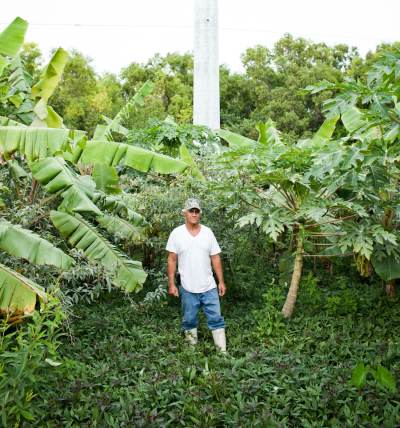 So the Homeless Trust pushed further, reaching into the undeveloped land around the shelter with an ambitious plan for transitional, subsidized housing for low-income residents with at least one disabled family member. Partnering with Carrfour Supportive Housing, a non-profit developer, they came up with a plan for Verde Gardens, a 145-town-home neighborhood in a quiet, suburban layout of cul-de-sacs and wide lanes. They would also build a community market space and set aside 22 acres for a community farm. The project took years to get off the ground, but it opened in 2011, and the homes filled with residents soon after.

“We had one year to become sustainable,” says Mario Yanez, founder and director of Earth Learning. “That’s a tall order for a new community that’s just getting to know one another.”

They plowed five acres of the farm and planted tomato, greens, squash, beans, fruits. They overlaid banana, yucca, and sweet potato to create a traditional tropics poly-culture environment. They held workshops with community members and hired a handful to work, at living wages, on the farm full-time. That’s how Juan, who was by then a resident in one of the town homes, got involved. But even with the ample growing season, productive acres, beautiful market space and kitchen at the entrance to Verde Gardens, one year was not enough to render the farm sustainable. So Mario applied and received the USDA’s Community Food Project (CFP) grant in 2012.

“Our next step for this year is to bring the community in,” says Mario. “We’ll have leadership workshops to identify and train leaders in the community who want to have a serious role in the farm. We’ll have skills training courses and we’ll share with the community the needs and challenges we face at the farm. We’re trying a subsidized CSA to bring more food into community homes.”

Verde Gardens is a permanent housing community. Residents pay 30% of their income in rent. And like so many neighborhoods in our current, unpredictable economy, Verde can be a transient place. In late 2012, for example, many residents were asked to leave after the first year-and-a-half. They had broken the rules of no alcohol or substance abuse in the community. So a new wave of community members moved in.

But Juan and others remain. Juan rides his custom-made chopper bicycle to the farm each day. He fixes irrigation lines, chops back overgrowth, harvests for the market. He buys much of his family’s food at the market on Saturdays. With so much diabetes in his family, he tries to add more vegetables to their Cuban-style diet of rice, beans, plantains, lettuce. But his kids still eat fast food. It’s a slow change. Juan looks so natural beneath the umbrella leaves of the banana plants, his white boots ankle-deep in sweet potato ground cover.

When he rides his bike home, he leaves the neat, fecund rows of the farm, passing through three acres of what is becoming a mature edible forest where the majestic banyan tree seems to be reaching its vine-entangled arms over passersby.

“If we could employee 300 of the residents at the farm, that would be great,” say Mario. “But we can’t. We’re doing well with the half dozen or so individuals who work with us and we get plenty of kids connecting with the farm, but encouraging the community to coalesce around it is our biggest challenge.”