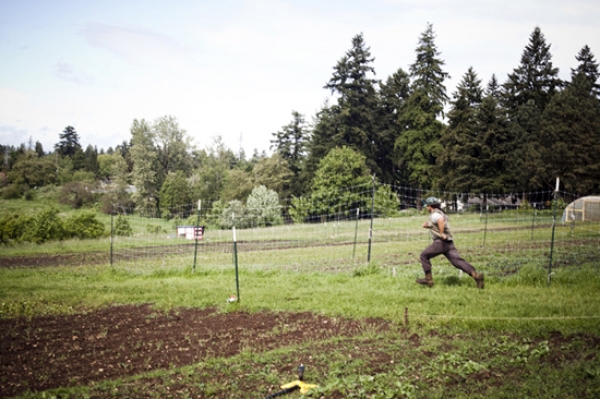 Zenger Farm turns 100 in 2013. In its lifeline, one can see a (admittedly simple) model of 20th century American development with a happy ending.

Chronology Point 2: farming’s mid-century decline as industrial jobs take over
Zenger and family lived in the farmhouse and farmed the land. Ulrich Zenger Jr. took over when his father died in 1954. He maintained the farm, though not as a commercial enterprise.

Chronology Point 3: with less commercial farming, farmland gets gobbled by developers
Then development began expanding out of nearby downtown Portland in the 60s, 70s, and 80s, a time when much farmland was sold for homes and retail centers.

Chronology Point 4*
Here is the first place Zenger Farm takes the less-traveled fork in the lifeline of a typical 100-year-old American farm at the edge of a city. Instead of selling the property for real estate, Zenger Jr. considered ways to preserve* the land

Chronology Point 5
A few years after his death, the City of Portland’s Bureau of Environmental Services bought the farmland in 1994 as a way to conserve vital wetlands and manage storm-water runoff in the flood-prone Johnson Creek watershed.

Chronology Point 6: farmer resurgence and rise of farmer advocacy begins in the late 1990s and early 21st century
A farmer named Marc Boucher-Colbert moved in, worked the land, and began using the farm as a teaching outpost. In 1999 a non-profit, Friends of Zenger Farm, formed, expanded the farm’s teaching mission, and secured a fifty-year lease on the land from the City of Portland.

Nowadays, with the land secured, Zenger Farm can work its multi-layered magic as many urban and peri-urban (edge of city/suburb and farmland) around the country are doing in the 21st century.

“We realized we had kids coming from all over Portland, over 5,000 every year, to participate in our educational activities,” says Jill Kuehler, executive director of Friends of Zenger Farm. “But we wanted to figure out a way to serve the local community.”

Zenger Farm is a mile inside the eastern limit of Portland city. Interstate 205 basically cut the area off from the rest of the city so it sits as a sort of barrier community between the raised interstate and its walls and the outlying counties. Zenger began the Healthy Eating on a Budget Program. Staff, interns, and volunteers from the farm go to apartment housing facilities and schools to teach the residents and students about healthy foods and how to cook them. Demonstrations using produce from the farm encourages the neighbors to make healthier decisions and come to the farm to learn more.

The workshops have reached over 800 families in the last two years and the participants have begun taking ownership of the resource. They suggest useful course topics, like how to make soups with produce, how to build a container garden.

With the organization’s strong educational history, Zenger has now been invited to engage every 5th grader in the local David Douglas school district to take part in their “Farm School” program: three farm visits per year for the students and the Zenger visits the schools with curriculum integrated into their science classes. 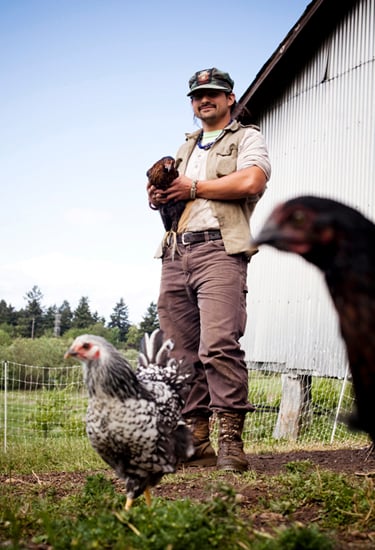 Finally, Zenger has been developing a small-scale, low-income version of the CSA. Consumers can use SNAP money to make incremental payments throughout the season. It’s not the answer to the difficult low-income CSA dilemma, but it’s getting there. Many low-income residents who depend week-to-week on SNAP income, don’t want to put money toward a farm at the beginning of a growing season. They don’t understand the long-term payoff or simply don’t have the cash on hand.

The hope at Zenger is that their overlapping programs – the Farm School engagement with students, the growing-cooking workshops with adults, the Lents International Farmer’s Market that serves many of the community’s immigrant population – will bring awareness to the opportunities for healthy eating offered by the farm.

Robert Ericksen isn’t from the neighborhood or Portland. He grew up on the east coast and came to Portland for college. After graduating he saw the intern position listed online. He applied and did not get the job. But he started volunteering at the farm anyway. He had wanted the job, but he also wanted to change his diet for the better.

“At the Friday work parties, I’d do a lot of weeding and I’d ask the staff about each of the vegetables in the row,” Robert says. “They’d tell me how to cook it and I’d take some home and try it. I learned it all that way. Now I’m an intern here and I’m teaching Healthy Eating on a Budget workshops to adults and students.”

“I’d never worked on a farm before. It’s tough. I’m not sure I could run a big one on my own, but I’m thinking about moving back east and starting something like Zenger there.”

The chronology continues, on a good path for Zenger Farm’s land and people.