The Food and Farm Bill is a massive piece of legislation that shapes just about everything about how we eat, from farm to plate. It includes funding for SNAP (formerly food stamps), support for farmers, provisions for conservation and much more. Usually, the bill is rewritten every five years, but Washington hasn’t done anything in the usual way lately. A new Food and Farm Bill was expected to be passed in 2012, but instead Congress passed a one-year extension to the 2008 bill–an extension which cut many programs supporting local and regional food systems. After many months of uncertainty about when movement might start on a new five-year bill, we have an answer: Now! 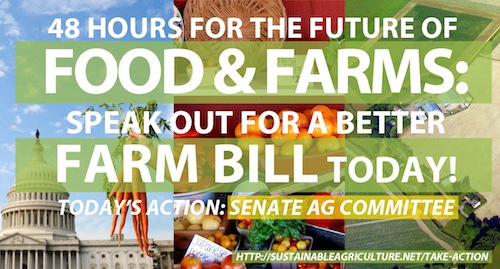 The House and Senate Agriculture Committees released their versions of the bill late last week and are scheduled to debate them and add amendments on Tuesday and Wednesday, respectively. It is likely that there will be a full hearing on the floor of the House and/or Senate next week.

Both bills propose cutting billions of dollars from SNAP (formerly food stamps), and in each, some critical programs to support small-scale, beginning and minority farmers, farmers transitioning to organic, and others have been cut.

What can you do? This week, the Agriculture Committees need to hear from you! On Tuesday, call Senators; on Wednesday, call Representatives! (You can reach any of them through the Capitol Switchboard, (202) 224-3121.)

When you call, ask to speak to the staffer who works on agriculture issues. Ask them to oppose any cuts to the SNAP program, and to support amendments in support of conservation, beginning farmers, and local and regional food systems. (For more specifics and a script, click here.)

Finally: This is the future of our food that Congress is talking about. Don’t let them do it in secret–we have to let them know we’re paying attention. You can watch the hearings starting Tuesday at 10am EDT here. Follow the proceedings and join the conversation on Twitter, #fairfarmbill and #farmbill. You can also tweet at Senate and House Ag Committee members. Make your voice heard!