Rose Edith Germain listened attentively, eager to learn. She shook her head in disbelief when Joe Fagen talked about how a black family was not able to get a loan to build a house in a predominantly white neighborhood in Iowa. The description was so clear to her that she probably did not need the interpreter to end the sentence.

Along with her colleague Rosnel Jean Baptiste and their Brazilian ally Flavio Barbosa, member of Via Campesina’s South American Dessalines Brigade, Rose Edith came all the way from Haiti to visit farmers and ally organizations in Iowa, as well as in New York City and Detroit. Her organization, the National Congress of the Peasant Movement of Papaye (MPNKP) is a member of Haiti’s Group of Four (G4), a coalition of the country’s four largest peasant organizations. Rosnel is the general coordinator of Tet Kole, another member of the G4 coalition. Together, the G4 and the Dessalines Brigade, which works in peasant-to-peasant solidarity with the Haitians, won the 2013 Food Sovereignty Prize, organized by the US Food Sovereignty Alliance (USFSA), a coalition of grassroots groups and support organizations dedicated to promoting food sovereignty in the United States. 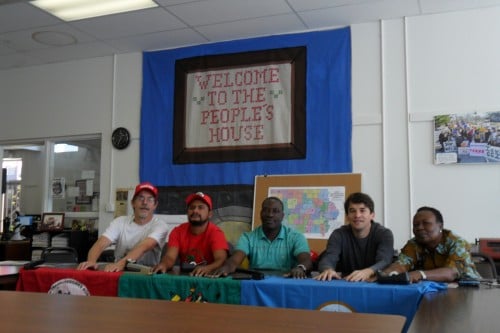 Rose Edith, Rosnel and Flavio came to the US to accept their award in a ceremony in New York City on October 15, and then visited USFSA member organizations in Detroit and Iowa. Their visit is a critical step towards building alliances between farmers and communities across the country and around the world.

Back in Iowa, Joe, a founder of Iowa Citizens for Community Improvement (ICCI), observed, “Here, we don’t hear anything about a peasant movement in Haiti.”

Rose Edith, Flavio and Rosnel smiled simultaneously. We are about to get into the thick of things. For two and half hours, these five leaders in the global food sovereignty movement shared stories of resilience. Rose Edith and Rosnel spoke about the work of G4 in organizing farmers against Monsanto. Not coincidentally, that very morning Joe and Larry Ginter, also an ICCI member, had delivered a petition with 347,000 signatures to the World Food Prize committee objecting to the 2013 Prize being awarded to Monsanto.

Like Joe, Rosnel spoke with passion. He told us how 10,000 peasants gathered in Haiti’s Central Plateau region to protest and burn seeds that Monsanto donated following the devastating 2010 earthquake. The “gift of death,” as he called it, came in big containers. Despite their needs following the earthquake, Haitian peasants refused the seeds. They knew it would destroy their way of life.

Besides the unknown health and environmental effects, the seeds would be the entry point for Monsanto and other agribusinesses to sell pesticides and chemical fertilizers to cash-strapped Haitian farmers. For the Haitians, genetically modified and hybrid seeds would create dependence on agrochemicals produced by Monsanto.

Joe and Larry were jubilant. Farmers in Iowa had gone through a similar situation and now have their hands tied. The “I’ve-been-there” moment brought silence to the room. Larry took the moment to articulate how the fight against the takeover of our food system by the likes of Monsanto is indeed global.

The story of a US farmer

Larry is a powerful communicator and an emotional and empathetic speaker.

“Growing up in Iowa was a different experience [than it is today],” he said. “The farm was diversified. We had oats, alfafa, cows for meat and milk, pork and chickens. We used to butcher our own animals. We used to separate the cream from the milk. We had a garden and fruit trees. Most of the farms were like that. We had farms with 80 – 200 acres, and few farms were larger than 8,000 acres.”

Larry, who is now retired from farming, comes from a small family – mom, dad, and three sisters. They worked 240 acres of land that his parents leased. In 1952, the landowner died.

“Dad was conservative, and had lost money when the banks closed.”

Like Larry’s father, many US landless peasants – what we more commonly think of as farmers – and sharecroppers never recovered from the impacts of the Great Depression. Many were never able to own land. In fact, the US government’s priorities were far from that goal, and were instead focused on expanding the war economy and transforming U.S. companies (including agribusinesses such as Monsanto and Cargill) into transnational corporations.

Larry’s father did not have enough money to purchase the entire parcel of 240 acres, but negotiated to buy part of it. From an economic point of view, Larry regrets that his father did not want to make a bolder move and purchase the whole farm. At the time, he said, the federal government had policies such as the PRAIRIE program, which stabilized prices and helped farmers not only stay in business but flourish.

“Life was great. The town was buzzing. We had a railroad and a [grain] elevator.”

Then in 1953, the federal government dismantled the PRAIRE program. Larry’s eyes overflowed with tears.

“They [the government] turned their back on us. With the loss of the price floor, farmers started giving up. The supermarket closed. The elevator closed. The railroad closed. Everything was gone and life had changed forever.” 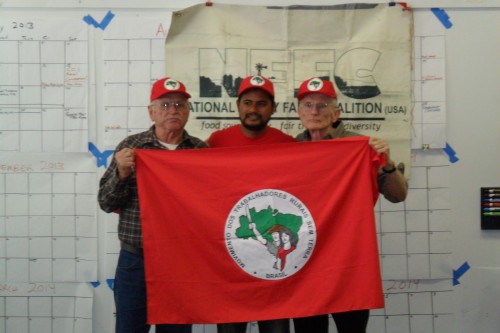 The fight against agribusinesses

The concept of food sovereignty had not yet been articulated at that point, but Larry and many others in his rural community already felt the powerful influence of corporations in farmers’ decisions.

In 1959, national farm coalitions were created. Farmers started rebelling against what they thought to be unfair exploitation. Larry and his neighbors organized for better prices for their hogs.

“It was a collective bargain. It was a campaign to bargain together against the low payments we were receiving for our products. Farmers decided not to sell their hogs or their milk.”

Small-scale farmers were organizing, but so were larger farmers and corporations, who founded the Farm Bureau to lobby for their own interests—which often weren’t the same interests as the small farmers.

The backlash to the hog campaign was intense. There was enormous pressure on each family to break the collective and sell their hogs, even at the low prices that the buyers were offering. Larry recalls that the farmers who organized were chastised.

“They called it socialism. After three weeks, family by family started selling the pigs again. To this day, I feel bad to say that we sold our pigs. The animals were too big. I still feel bad about it because betraying the other farmers who joined the movement was like betraying my family.

“Looking back, we failed to organize the meatpacking workers and the truck drivers. We failed to make an alliance with the Teamsters, the largest truck union.”

Larry’s story is similar to others told by many small-scale farmers throughout the United States. At that time – just a few years after the end of World War II – Cargill, BP, Wells and the meatpacking industry already enjoyed great influence over our food system. In the years since, the agribusiness model developed by those companies with the support of the US government, has had devastating effects on small-scale farmers around the world.

Sharing our stories and our history is an important way to resist the status quo and build alternatives. International solidarity is a critical tool for social movements. It can save lives of leaders suffering with political persecution, be a vehicle to share resources and knowledge and a sign of co-existence and shared values. The conversations shared by between Joe, Larry, Flavio, Rosnel and Rose Edith in Iowa demonstrated that. Building international solidarity, by sharing stories, face-to-face, is an expression of people’s power.

In March of 2010, Larry Ginter was one of many farmers and allies who testified to a town hall meeting in Des Moines, Iowa, prior to a hearing by the USDA and Department of Justice investigating corporate consolidation in the food system. Watch Larry’s strong words about power at 6:01 in this short video from that event.