We’re participating this week in the Farm Labor Reality Tour, which is in Kendall, Wisconsin, today, working on a dairy farm. The tour is headed up by Bob St. Peter, Maine vegetable farmer and a board member Food for Maine’s Future (a 2012 www. winner). Food for Maine’s Future focuses in part on issues of local control over the local food system – true community-based food sovereignty. 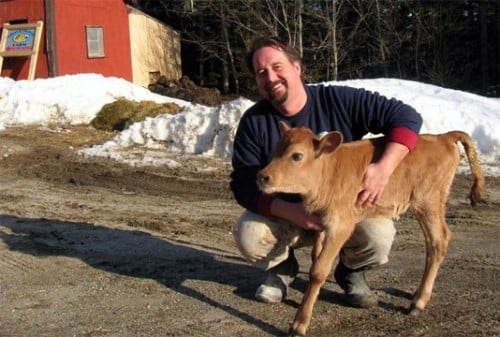 Since March, 2011, ten Maine towns have taken action to define and protect small-scale farming, cottage food businesses, and traditional community social events by passing Local Food & Community Self-Governance Ordinances, as a way to codify local control into town policy. The passage of what are, in effect, food sovereignty ordinances in Maine has sparked a national movement of localized actions in states around the country to reclaim control of decision-making over local food systems. The movement is raising important questions about who gets to decide how food is produced and how that food is exchanged among consenting individuals.

We’re pleased to publish an essay by Bob St. Peter, written for our Food Security Learning Center, about the importance of the Local Food & Community Self-Governance Ordinances, exploring the impact of the growing movement to adopt food sovereignty ordinances in Maine and looking at what’s next.

The Right to Eat Local: Assessing the Relevance and Impact of the Local Food & Community Self-Governance Ordinance

On November 9, 2011, Dan Brown of Blue Hill was served a summons by the State of Maine for selling milk and other food prepared in his farmhouse kitchen and sold through his farmstand and local farmers’ markets. A little over a week later, on November 18, nearly 200 people gathered on the steps of the Blue Hill town hall to call on the State of Maine to drop the lawsuit and respect the authority of Blue Hill’s LFCSGO. Under the banner “We Are All Farmer Brown,” the rally brought together farmers, farmworkers, farm patrons, political activists, medical marijuana caregivers and patients, militia members, socialists, anarchists, Democrats, Republicans, Tea Partiers, and “rednecks for the wilderness.” Following the formal rally, a parade of speakers ascended the town hall steps, took the mic, and explained why suing a farmer for selling food to his neighbors was unacceptable. Speakers framed the issue in a variety of contexts: preservation of local culture and traditional foodways; influence of agribusiness corporations over state and federal food policy; rural economic development; personal rights and liberty; hypocrisy and overreach of government officials and agencies.

For a couple hours that day in Blue Hill, the divisiveness that plagues U.S. political discourse was set aside in favor of a unifying message: We, the People, have the right and responsibility to choose from whom and in what manner we get our food. That message could not be misconstrued by anyone in attendance as being any form of justification for the environmental, social, and economic harm that predominates the U.S. food system. Rather, it was an affirmation of community-based food systems, of neighbors feeding neighbors using time-tested husbandry and production methods.