Lorrie Clevenger of Rise & Root Farm admits that as a young person, farming was never on her list of dream careers. Growing up Black in a white family in rural Missouri, Lorrie looked at the surrounding farmland and saw that it was owned and worked by white men. She never saw any women farmers, and certainly not any farmers of color. The only time she’d ever seen Black people farming was on television, and then it was always associated with slavery. 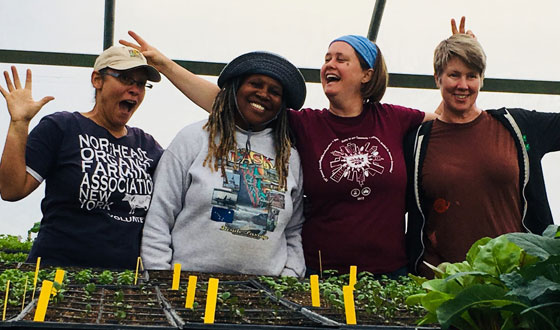 It was during her service in the Peace Corps that Lorrie encountered cultures that understood the importance of connecting with the earth—growing, harvesting and enjoying its bounty. After returning to the U.S., Lorrie embarked on a journey of learning what it meant to be a Black farmer in the United States. She discovered thriving Black communities growing food together, saving heirloom and ancestral seeds, and creating alternative economies that value both people and planet. Along the way, she also connected with one of her heroes, Karen Washington, a longtime Black farmer and food justice activist. Together, Karen, Lorrie and five other Black women founded Black Urban Growers (BUGS), which builds networks and community support for urban and rural growers.

Lorrie said to WhyHunger “I wanted there to be people who look like me farming. So, I decided, why not be that person?”

In 2015, Lorrie and Karen teamed up with Jane Hodge and Michaela Hayes to co-create Rise & Root Farm in the rich soil of Orange County, New York. Rise & Root produces fresh, sustainable produce for their families, local markets and restaurants while changing the narratives around Black people, women, and farming.

These farmer-activists, Lorrie, Karen, Jane and Michaela, are educating other farmers and their community on food production and social justice. Their farm challenges the historically exploitative system of farm labor, seeking to be an example of a cooperative agricultural business that provides fair wages and a supportive community. Rise & Root not only grows healthy food but healthy, vibrant people who can feel safe and connected to the land again.

For more on the great work Rise & Root Farm has been doing, visit www.riseandrootfarm.com

Sign up today to receive the ROOT Report stories in your email: WhyHunger.org/TheRootReport