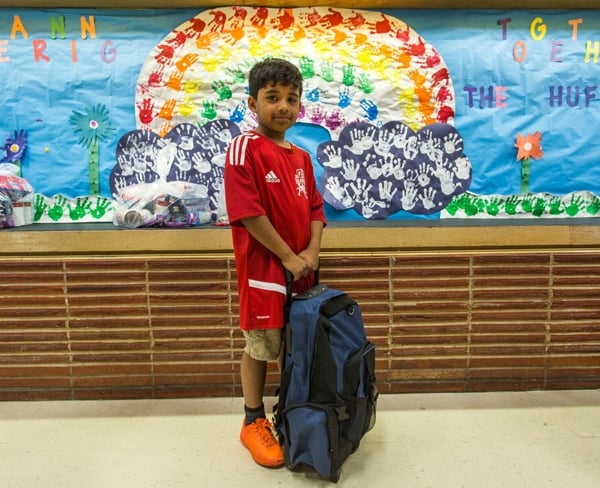 Hunger Is, a joint charitable program of the Albertsons Companies Foundation and the Entertainment Industry Foundation (EIF), has been working with community-based organizations across the U.S. and national partners, like WhyHunger, to help end childhood hunger by investing in nutritious breakfast for every child! They have helped fuel innovative programs to provide 6.4 million healthy breakfasts to over 200,000 kids. Last year alone, their grantees in 33 states and the District of Columbia provided enough fresh fruits and vegetables to equal the weight of the Statue of Liberty – over 460,000 lbs. – to help give kids the fuel they need to grow, learn and thrive. We’ve been teaming up with Hunger Is to spotlight these critical programs and their impact. WhyHunger recently visited the Northern Illinois Food Bank to see their BackPack program in action and created this short video to share its impact.

The Northern Illinois Food Bank serves more than 71,500 people across thirteen counties of Northern Illinois. 66 percent of the households served fall at or below the federal poverty level and 36 percent of recipients are children under the age of 18. It’s a mix of small to mid-sized towns, Chicago suburbs and exurbs and rural agricultural communities. Despite being in America’s breadbasket with seemingly endless corn fields, food insecurity and a lack of nutritional options affect far too many residents.

The Food Bank has been addressing food needs since 1983 when Sister Rosemarie Burian began distributing food via soup kitchens, food pantries and shelters. Since then, the Food Bank has grown and evolved, realizing its role in not just providing food, but providing healthy food and reaching into the hunger gaps that exist within communities. A 2014 Hunger in America study found that 53 percent of households served by Northern Illinois Food Bank reported at least one family member with high blood pressure, while 26 percent of households had at least one family member with diabetes.

The Food Bank was seeking ways to combat diet-related disease, reach more people with healthy food and reach them at the right times even before that study. In 2008, the Food Bank began a BackPack program, which now distributes a variety of shelf-stable foods each week to students in more than 180 schools during the school year. The BackPack program aims to fill the meal gap for children at risk of hunger at times when they are not in school, such as evenings and weekends. School partners often reported that students who rely on free and reduced lunch for weekday meals would often come to school on Mondays feeling sluggish and irritable due to not having adequate access to meals over the weekend, thus putting them at a disadvantage to learn and perform.

“77 percent of the families we serve have reported that they will purchase inexpensive processed foods, even if unhealthy, to stretch their food budgets,” says Liz Gartman, Communications Manager at Northern Illinois Food Bank. “So we looked at how we could help mitigate the challenges of providing nutritious meals at home so these kids can have the proper nutrition over the weekends they need to grow and lead healthy, active lives.”

The BackPack program is simple: Food Bank staff and volunteers pack a variety of shelf-stable products – whole grain rice, cereals and pasta, milk, canned chicken or tuna, canned fruit and veggies – into rolling backpacks which are delivered to the 180+ schools each week. At the end of each week, each eligible student picks up their backpack and takes it home for the weekend, returning it Monday morning to be refilled later that week for the coming weekend.

The Food Bank continues to seek ways to expand its BackPack program, including growing it to include more summer sites, as summer break creates another critical hunger gap for many families. With funding support from various private donors, like Hunger Is, more backpacks can be filled with nutritious food to reach more children during the school year and summer break alike.

“Our overall mission of solving hunger means getting every hungry neighbor every meal every day, and that includes reaching kids no matter where they are,” says Gartman.

Hunger Is, a joint charitable program of the Albertsons Companies Foundation and the Entertainment Industry Foundation (EIF), builds awareness and raises funds to end childhood hunger. The Idaho Foodbank received a grant to fund efforts in Idaho. This is the third in a WhyHunger series of profiles of grant recipients and their impact.