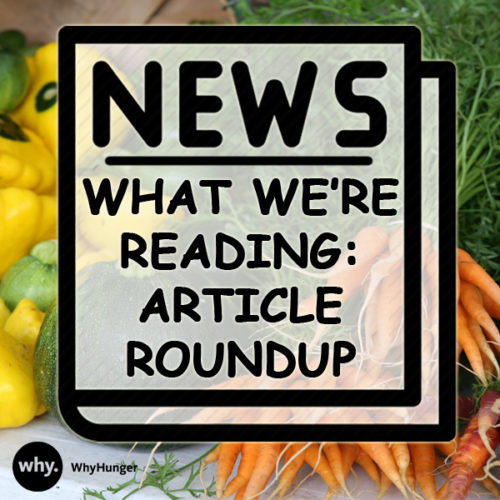 WhyHunger works to end global hunger and poverty by critically examining and addressing their root causes and providing resources and support to grassroots movements led by those most impacted.

Estimates place over a million women working as farmers in the United States alone & in the Global South they are responsible for 60-80 percent of food production. Yet, women & girls suffer the highest rates of poverty & remain the most food insecure worldwide. Such figures are staggering. Fortunately, however, women also play critical roles in the movement to procure land access & food and water rights. This Women’s History Month, we chose to celebrate, honor, & remember the continuing struggles of this historically underserved & subjugated population. The following articles feature the stories of women & girls working on the frontlines, shedding light on the strides they have made towards building a better, just world for both themselves & their families.

Forbes: Intersectionality: An Invitation For Action On International Women’s Day And Beyond

The fight for a gender-balanced world has historically excluded women of color and transgender women. Hence, for this year’s International Day of Women (and beyond), the focus is now on intersectionality. In order to attain and advocate for the equal rights of women everywhere, the experiences of women across the globe from all backgrounds and identities must be taken into consideration.

Rural and urban working women often experience some of the most severe instances of social injustices worldwide, from poverty and hunger, to exposure to health hazards from environmental toxins near their homes. So for this year’s International Women’s Day, women everywhere have begun building the movement for grassroots feminism. They are fighting the patriarchy to demand back their rightful access to food, water, land, and other resources, and taking their protests all the way to the UN for real, actionable results.

Communities of color are disproportionately affected by climate change, alongside all of its other associated environmental and health hazards. Grist speaks to four leading Black women activists and scholars about what environmental justice means to them and their work, the challenges they’ve faced, as well as the successes they had in continuing to advocate for their people.

Civil Eats: For This Queer Latina, the Kitchen is the Best Place to Fight For Justice

It may be difficult to imagine a woman fighting for equal rights from the kitchen—perhaps THE iconic emblem of the subjugation of women throughout history. But that’s exactly what Chef Silvana Salcido Esparza does. Silvana calls the food at her Phoenix restaurants “badass”, much like herself. To her, there’s no separating food and politics. Having built a reputation as a chef, she draws upon her immigrant, working-class roots to now lead the movement for marginalized people and advocate for their rights.

The Guardian: ‘We’re the ones affected’: teen climate activist on her viral clash with US senator

Young women are taking action! Swede Greta Thunberg rose to prominence following her weekly protests for climate change outside the Swedish parliament building in August of 2018. The #FridaysForFuture movement has now turned global, gathering thus far nearly a 100 countries and 1,000 schools worldwide. The EU finally paid attention to its students boycotting their education in order to push politicians into action. Inspired by Thunberg’s actions and by the student protests sweeping across Europe, California’s own teen activist Isha Clarke has been on the move raising awareness of politicians’ indifference and inaction toward climate change. She’s determined to incite something similar on US soil.

Slate: The Story of the Impossible Island

British novelist Helen Oyeyemi recently published another new book on women, and their lives and families that at once define and confine them. Initially set in London, the story revolves around three generations of women: Perdita Lee, her mother Harriet, and grandmother Margot, later tracing their ancestry back to the fictional island-nation of Druhástrana, whose isolationist and neoliberal policies frighteningly echo the follies of the modern world.