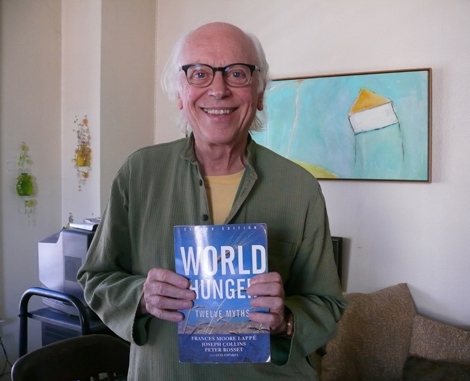 Bestselling authors Frances Moore Lappé and Joseph Collins have released the book ‘World Hunger:10 Myths’, which reconsiders and updates their highly influential previous version that was first published in 1977. Their in-depth research explodes common misconceptions about hunger and one of the consultants for the text was Peter Mann, former WhyHunger staffer and a long-time food justice activist and leader. WhyHunger intern Evangeline Graham sat down with Peter to talk about the importance of ‘World Hunger: 10 Myths.’

What’s changed since the book was first published in 1977?

There’s a whole lot of new research that’s come up about hunger and about the ways we can end hunger. And there are other issues that have come up as well such as climate change. The majority of poor people in the world, especially the small-scale farmers and women farmers, are in the environment; it’s part of their life. Pope Francis is one of the people trying to create wider support for not only ending poverty, and hunger as a sign of poverty, but also connecting that to recovering and restoring the environment. This comes up very much in World Hunger: 10 Myths. Another issue getting attention is globalization. It was there before, but awareness has increased tremendously about the power corporations have to control the food system.

How did you come to be involved with the book?

There’s a Portuguese proverb – ‘God writes straight with crooked lines.’ What happens in life is that you meet someone and it changes your direction. For the first half of my life I was very spiritually involved, studying theology. At that time I was in Germany, and I happened to meet this American called Joseph Collins, who is one of the co-authors of World Hunger:10 Myths. We hit it off and became very close friends. In ’76 he was talking to Bill Ayres, who co-founded WhyHunger with Harry Chapin. Bill Ayres asked Joe Collins, ‘I’ve got this project with a television studio in Long Island, do you know anyone who could help me with this?’ And Joe said, ‘Get Peter Mann.’ I came over and I began working with Bill Ayres on media. Then in ’86 I moved to New York and I began working at WhyHunger.

Bill and Harry were very global minded, and were already working on the question of why, why in a world in which we waste nearly half our food are people hungry? Why are people hungry in a world of abundance? Why are people poor in a world with so many riches? The issues that came up then are now emerging at the level of a presidential campaign, with Bernie Sanders talking about the billionaires. The kind of radical approach was always there and as WhyHunger has grown, it’s become more and more involved in radical approaches to ending hunger.

One of the insights of ‘10 Myths’ is that we have to rethink our approach to hunger. As Frankie Lappé  (Frances Moore Lappé, co-author of 10 Myths) says, we have to see that the way people think about hunger is the greatest obstacle to ending it, because people think it’s inevitable, and it’s not. We have the resources now to end hunger. The book shows the myths that block our awareness and understanding. ‘There’s too little food and not enough people’ is one myth. It’s not true. There’s far more food still, in the world with 800 million people undernourished. There are other myths about climate change, about power and about foreign aid.

Which of the ten myths were you happiest to see debunked?

At the same time, myth number four is ‘organic and ecological farming can’t feed a hungry world.’ The explosion of that myth interests me because I’ve been around the world and seen that local farms, peasant farms, women farmers, are actually doing farming in a very healthy way, very much involved in nature using an agroecology farming system that is built on principles of ecological fairness, ecological realities and traditional farming. Now we have whole movements, like La Via Campesina, which has a couple of hundred million peasant farmers in it who are bringing that kind of farming into the foreground. But it would be so much better if governments would also get behind ecological farming.

What will it take to make that change happen?

For sometime I’ve felt that the solution to hunger was a long way away, except among certain countries in the Global South and a movement of global awareness in the Global North, but now something seems to be happening. I don’t want to go on about Pope Francis, but as more prominent people continue to talk about these issues, the more people become aware about the issues affecting hunger and poverty, and will hopefully work to do something about it. So, I feel more optimistic now than I ever did before that there’s going to be change.

World Hunger: 10 Myths gives strategies to break through the myths and connect to all these wonderful social movements around the world for the right to food, the right to land, for good food, for farmworkers and food workers getting a decent wage. That’s very hopeful to me.

Who do you think should read this book?

I think that all kinds of people who have a progressive mentality would love to read this. It’s very much updated – it’s a new book. And it deals with the issues that are the headlines of the newspapers. The newspapers don’t provide solutions. But the solution I think is in this book.

Be sure to get your copy of "World Hunger: 10 Myths" available now.