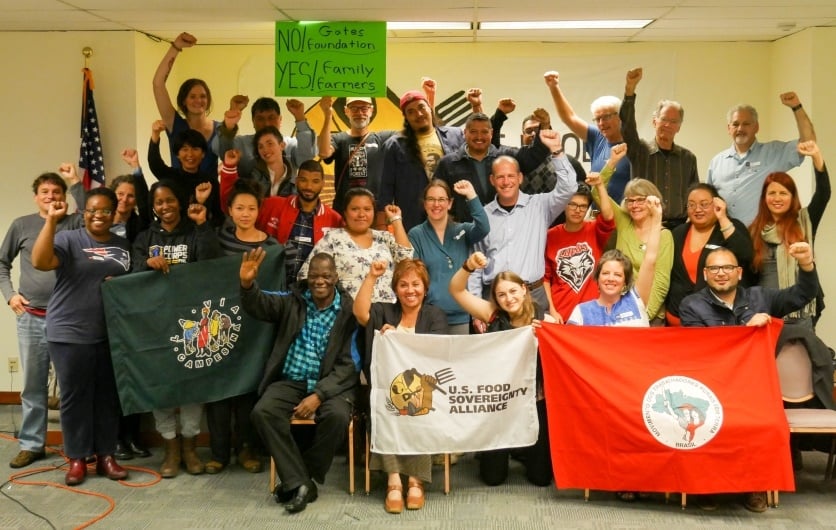 This article is a report back on the 8th Annual Food Sovereignty Prize that was originally published by the Community Alliance for Global Justice. Photos by Colette Cosner, Feed the Hood, Johanna Lundahl and Community to Community Development.

Last week, representatives of over 20 organizations gathered in Seattle and Bellingham for several days of dialogue, action, and celebration of the growing food sovereignty movement. The Encounter, co-hosted by Community Alliance for Global Justice and Community to Community Development, was a national gathering of the US Food Sovereignty Alliance (USFSA). On Saturday, we honored Alliance for Food Sovereignty in Africa and Farmworkers Association of Florida as recipients of the 8th Annual Food Sovereignty Prize, awarded by the USFSA.

As an alternative to the World Food Prize awarded the same weekend in Iowa, the Food Sovereignty Prize recognizes that transformation of our food system comes from the grassroots, frontlines, and communities building power – not corporate, biotech, and Big Ag industries focused on profit over people and the planet. Coming together for the Prize and events was an opportunity to reflect on strengthening our organizing and advocacy for agroecology, food as a human right, dignity for workers across the food chain, and community-led solutions to hunger and climate change. 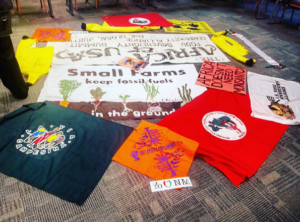 In the roundtable meetings, including an added final session on Saturday, important issues around defining “grassroots” and “grassroots-support” organizations and their roles, regional autonomy, and value of the USFSA were discussed, as well as lifting up the interconnected struggles between AFSA and USFSA. 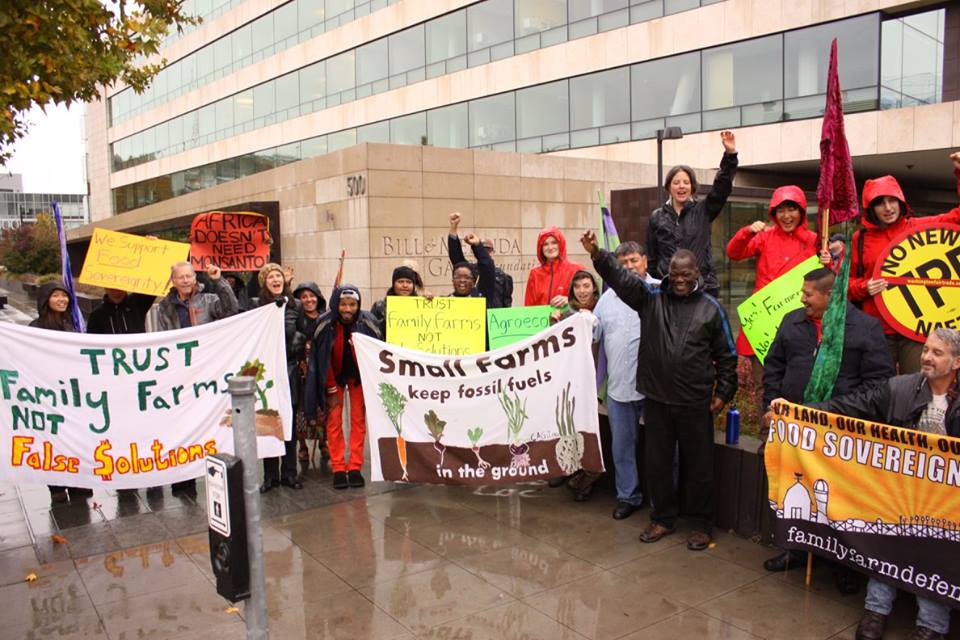 The gathering would not have been complete without an action and visits to local organizing and food justice work. On Thursday afternoon, attendees and other activists mobilized outside of the Bill and Melinda Gates Foundation to raise issue with the Foundation’s deep ties to the World Food Prize, which includes significant financial contributions to half of the 2016 winners and nearly $1.5 million in funding since 2009. Gates exports a model of market-based, high-tech agricultural investments and genetic engineering and biotechnology. In an interview with Humanosphere on the action, Bern Guri, Chairman of AFSA who came to receive the Prize on its behalf, says:  “Food sovereignty is about farmers’ communities being in charge, being able to produce the food they want to produce, to be able to use the seed that they want to grow, to be able to share their seeds among themselves, to be able to use the technologies that they believe work for them.” 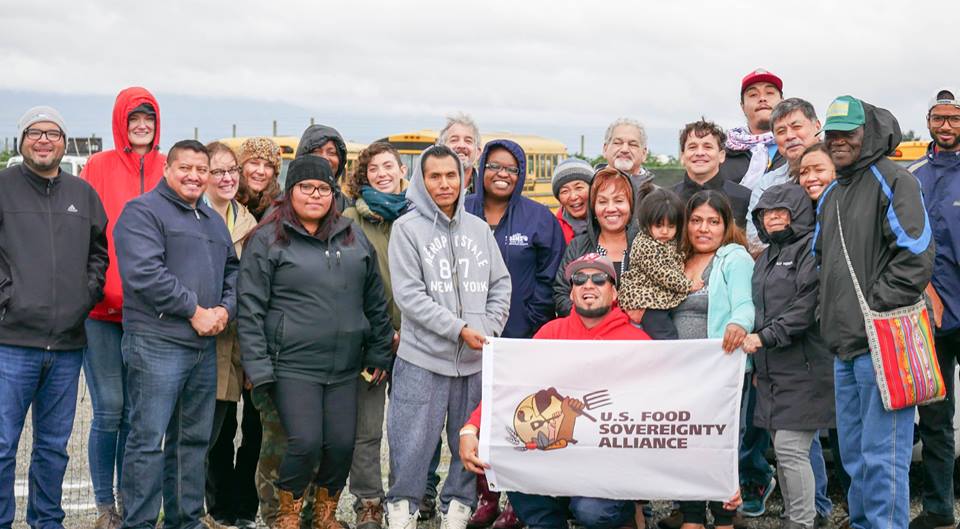 The next day, the attendees traveled to Skagit Valley to be welcomed by Community to Community Development and farmworkers’ union Familias Unidas por la Justicia (FUJ) with a presentation on the recent victories of winning an historic union contract as the state’s first indigenous-led farmworker union and getting to the contract negotiation process with Sakuma Farms, which sells to the world’s largest berry distributer, Driscoll’s. Ramon Torres, President of FUJ, shared the history of the organizing and the hopes for the future, followed by a tour of the Sakuma fields and labor camps where farmworkers live. A surprise visit with one of the main plaintiffs of the law suit against Sakuma happened just before folks drove to Bellingham to meet with a local co-op that supported the Driscoll’s boycott.

Saturday’s weather forecast of the “storm of the century” caused a shift of plans, despite the mild outcome. A tour of the Beacon Food Forest remained in the program, where folks visited the local urban forest garden working to improve public health and food access. 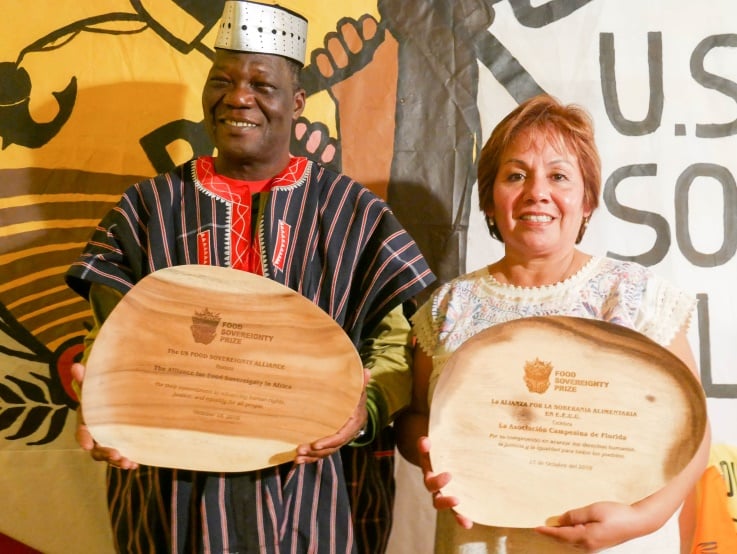 The main event of the Food Sovereignty Prize Award Ceremony was cancelled at Town Hall due to the threat of wind storms and power outages, and relocated to the home of CAGJ’s Director Heather Day, where the show went on in a more intimate setting, and was livestreamed on Facebook.

The ceremony opened with storytelling from Roger Fernandes, a member of the Lower Elwha Band of the S’Klallam Indians, sharing about the connection of food to our ancestors, our people, and those yet to come. After a keynote by John Peck, representing La Via Campesina, the 2016 recipients were awarded, both giving enthusiastic and powerful remarks: Elvira Carvajal on behalf of Farmworker Association of Florida, and Bern Guri on behalf of Alliance for Food Sovereignty in Africa. The evening concluded with a lively reception, music, and celebration.

Taking back control of our food system!

In a time of increasing corporate domination of agriculture, nutrition, and food systems worldwide, as seen by the recent $66 billion proposed merger of Bayer and Monsanto, the strength and visibility of the global movement for food sovereignty becomes ever more important. In the US, farmworkers continue to struggle for better working conditions, living wages, and dignity; poor, working-class, and people of color continue to organize for food justice and access; and advocates of family and small farmers continue to push for fairer policies. Together, we are all working to take back control of the food system at every level – from saving seeds to supporting farmworker unions, from people-of-color led initiatives addressing community self-reliance to international solidarity against corporate control of seeds and agriculture. Onward, together!