This spotlight is a feature in a series of the USDA Community Food Project Competitive Grant Program (CFP). Grantees are doing some of the most innovative and collaborative projects to change local and regional food systems. WhyHunger’s www. — also funded by a CFP grant — is profiling these organizations through dynamic stories and pictures, to give a real flavor of what the projects look like and how they’re accomplishing their goals. Up today: Lynchburg Grows, Lynchburg, VA. Story and pictures by David Hanson. 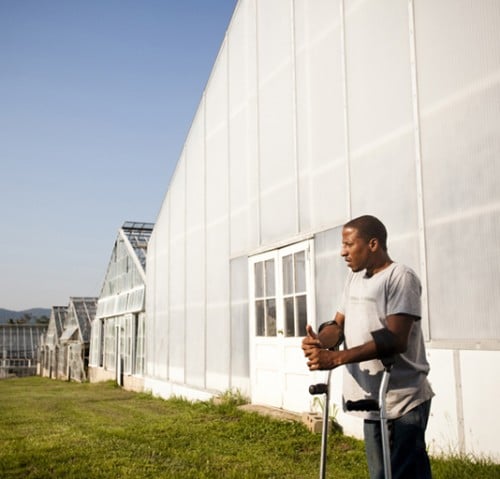 “All the bank saw were dead roses,” says Derek Cunningham, executive director of Lynchburg Grows, a nine-year-old urban farm for people with special needs. Apparently, when Derek and his partners proposed the idea to turn an abandoned 70-year-old rose production nursery into an urban farm, the bankers couldn’t see the farm for the dead roses.

Not all the flowers were dead, though. Red and orange and pink roses poked out of broken glass panes fifteen feet off the ground in a row of abandoned greenhouses behind the Lynchburg municipal baseball stadium. They were relics from the days before rose production went overseas to the high valleys of Ecuador or the dust-covered greenhouses outside Addis Ababa, Ethiopia.

Two separate families, the Doyles then, in 1952, the Schenkels, had run the Lynchburg rose nursery since the 1920s. The nine two-hundred-foot-long greenhouses totaled over four acres, each house valued at over $500,000. They were state-of-the-art facilities for their time, with automated systems to adjust the temperature via a water-cooled “swamp cooler” and a coal-burning furnace the size of a short school bus that heated coils beneath the raised beds. And the families were not shy about fertilizers back then, which explains the prehistoric-sized roses peering out at the vacant lot when Derek and company planned their Lynchburg Grows project. 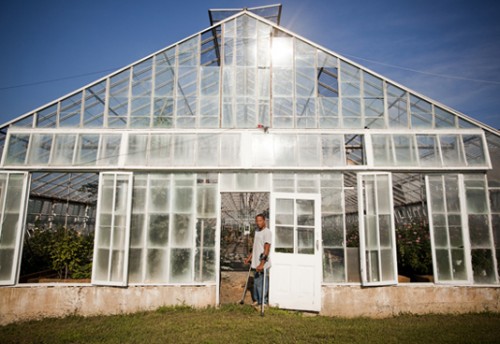