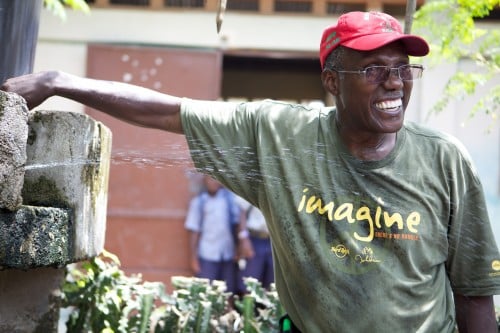 By Debbie Grunbaum, Director of Communications

We had lost everything. Our houses were destroyed, there was no drinking water — we had enormous difficultly, explains Manel Laurol, as he recounted the despair he felt in the aftermath of the 2010 earthquake that forever changed life in Haiti. We lost our friends and family under the rubble. We had to leave — but where to go?

Manel fled his home town of Port-au-Prince, Haiti’s capital, with his family and headed towards the lush countryside region of the Central Plateau. When he arrived, there were already 2,500 refugees who had descended on the small town of Hinche. Food, water and shelter were scarce and hundreds of local families took relatives, friends and strangers into their homes, offering what little they had.

Manel and his family met Chavannes Jean-Baptiste, a local community leader and founder and president of Mouvman Peyizan Papay (MPP), an organization that has been working with peasant farmers for 40 years to reshape the food system in Haiti. Chavannes brought Manel to MPP’s headquarters and training center in the nearby town of Papaye. Once they arrived, Manel and his family found 800 other refugees living in make-shift tents at the training center, relying on MPP for food, water, medical care, clothing and support.

After spending eight months at MPP, Manel and the others returned to Port-au-Prince ready to restart their lives, only to find that the entire city was almost completely flattened by the quake. Manel describes the city as “people living in misery” — an entirely different population, much worse off than anything he could imagine. “We had no idea — nothing was left. There was only misery, tents, nothing.”

After a few discouraging months with no work and little hope of improving their situation, Manel and a few of the other refugees returned to MMP.  Chavannes and the MPP leadership team knew that something must be done to help their fellow Haitians and that the solution would once again lie in sustainable agriculture and community power.

MPP selected 10 families — 20 adults and 33 children, representing the 10 different districts, or neighborhoods, in Port-au-Prince.  The men from these families, including Manel, worked together to build the first Eco-Village, a sustainable community meant to permanently change the lives and livelihoods of its once-urban villagers.

They built ten beautiful brick homes, each with two bedrooms, a living room and an external kitchen. Each home has a composting toilet, flower gardens, solar panel chargers to power small electronics and mobile phones.  There is a small vegetable garden for each family and a yard where children play. The experts at MPP worked with the villagers to train them on agro-ecological farming techniques and taught them to harvest a large communal plot of land and keep animals. They built a solar-powered well for irrigation and pens for goats, chicken and cows. MPP is helping the families pay the entrance fees to send their children to local schools until they are able to pay themselves.

In 2-3 years, the community will be entirely self-sufficient, explains Chavannes. This is food sovereignty.

A large community building sits as the village centerpiece where community meetings, elections and events are held. Manel was elected as the Coordinator of the first Eco-Village, one of a five member leadership team. It was from this building that Manel and the others told us their story.  All of the families were born and raised in the city; none of them had ever farmed before.  Surprisingly, to the many foreign urban dwellers in our delegation, they embraced the rural life.  In a survey conducted by MPP of 1,000 refugees, they found that 99% did not want to go back to life in the city. Many refugees commented that they were benefiting from their new found connection to the land and the healthy, chemical-free food they had become accustomed to eating.

“We will never forget how MPP helped us – we had nothing,” Manel explains. “The village would not be here if MPP did not have the support of partners like you,” he told our assembled delegation of Hard Rock International and WhyHunger staff.  MPP is planning to build a medical facility and continue working with the villagers on training and technical assistance. The team has secured funding and is now preparing to build four more Eco-Villages in the region. They plan to open a school in the coming years for the children. Their strategy is to use the success of this pilot program to secure further funding and more investment in the Eco-Village re-development model, based on agro-ecology and community. While most aid organizations are trying to rebuild homes in Port-au-Prince, where the economy is still far from recovery, and are investing in programs that are merely band aids to the city’s significant problems, MPP is holding the Eco-Village model as an example of a truly sustainable way to rebuild better.

This article was originally posted on care2.com.