In the face of corporations not only attempting to control the food system, but to control the very policies and institutions that are supposed to be protecting us, the only fighting chance that people’s movements across the globe have is to be vigilant, organized and unified. This was the resounding message at the launch of the Global Network for the Right to Food and Nutrition on June 24 in Vienna, Austria, as part of activities around the Vienna + 20 meetings on human rights. 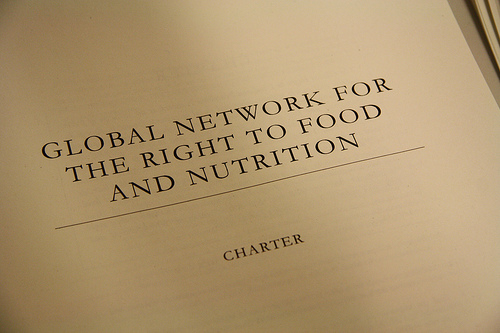 With a membership spanning the globe and representing many different sectors—workers, pastoralists, farmers, fisherfolk, health advocates and others—the aim of the Network is clear:  to build power in unity in the face of flagrant violations of the right to food, from land grabs to poverty-level wages to the poisoning of our food supply and, hence, our bodies. The Network was first convened by FIAN (the FoodFirst Information and Action Network) and is now led by a coordination team made up of half social movement leaders (e.g., World Forum of Fish Workers and Fish Harvesters; World Alliance of Mobile and Indigenous Peoples; International Indian Treaty Council, etc.) and half nongovernmental organizations.

The Network is committed to be guided by the priorities of the social movements—those who are bearing the brunt of the injustices of the food system, who are on the frontlines of struggle and who are increasingly being criminalized for their work in defense of human rights. The Network aims to forge deeper ties between these movements and the organizations allied with them so that when they are under threat, a global support network is ready to respond.

Or as Lalji Desai, a pastoralist leader from India said at an earlier meeting, “When we protest, we need to have back-up support from the global community.” As if in illustration of his words, Lalji was unable to make it to the launch in Vienna because he himself is now under threat as he mobilizes communities in the Indian state of Gujarat to protest the creation of “special investment regions” that could destroy the livelihoods of tens of thousands of small-scale food providers. Lalji has actually had to temporarily step down from his leadership positions in order to protect himself.

Producing food should not be a crime, nor should standing up for your community’s right to do so. Cases like Lalji’s and countless others affirm the need for a rapid response network coupled with longer-term strategies to protect the rights off all who produce food and all who eat. Those who participated in the launch of the Global Network for the Right to Food and Nutrition, including the founding members and supportive partners like UN Special Rapporteur on the Right to Food Olivier De Schutter, expressed their belief that this network is an important step toward achieving these goals (see talks by De Schutter and others here). In the words of Monika Argarwal, Lalji’s colleague from World Alliance of Mobile and Indigenous Peoples:

Christina Schiavoni is the former Director of WhyHunger’s Global Movements Program, and is now a consultant to the program, living in The Hague, Netherlands.