It’s lunch time across America. Do you know where your last meal came from—where it grew, who picked it, and how long it traveled to get to you? As a society, we are deeply disconnected from our food and unaware of the social and environmental costs of food production and distribution. 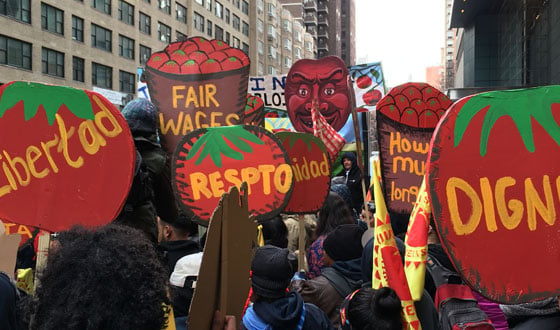 In Florida, reports of withheld wages, physical and sexual abuse, and other unjust labor practices are widespread in the agricultural industry. The Coalition of Immokalee Workers (CIW), founded by farmworkers in Immokalee, Florida, is taking action by going directly to consumers and distributors.

According to a study by the USDA, farmworkers remain “among the most economically disadvantaged working groups in the U.S.” They also face some of the harshest working conditions in any industry due to long hours, sun and pesticide exposure, and little break time. In extreme cases, agricultural operations have even resorted to slavery, holding farmworkers against their will and forcing them to work for little to no pay. Since 1997, seven slavery operations have been prosecuted in Florida alone. CIW argues that slavery “does not exist in a vacuum” and represents only the extreme end of the spectrum in a generally exploitative system.

In 1993, farmworkers in Immokalee had had enough and decided to organize. Soon realizing that low farmworker wages were a direct result of major retailers demanding low prices, they turned their focus to the next stage in the supply chain. They began by initiating protests and boycotts against companies like Taco Bell. As CIW gained support from student, religious and community groups, Taco Bell and others slowly began to agree to their demands.

Since then, CIW have partnered with fourteen multi-billion-dollar food corporations including McDonald’s, Subway and Whole Foods, and gotten them to sign on to their Fair Food Program agreement. The Fair Food Program establishes a set of labor guidelines for growers. Retailers that have signed on to the agreement can only purchase from growers who are in compliance with these guidelines.

CIW’s success has gained wide recognition and acclaim. The Harvard Business Review listed them among the 15 most important social-impact success stories of the past century. In 2017, the MacArthur “Genius” Fellowship was presented to CIW’s Co-Founder Greg Asbed. And in 2015, they received the Presidential Medal for Extraordinary Efforts Combating Modern-Day Slavery from President Obama.

CIW continues its activism for corporate social responsibility, farmworkers rights, and an end to slavery. Their current focus is on fast-food giant Wendy’s, one of the few remaining companies that has not signed on to the Fair Food Program. On Wednesday, November 18, 2019, CIW is planning a major mobilization in New York City as part of their effort to win over Wendy’s. Join them and take part in shaping a more just and healthy future for the food industry.

To find out how you can take part, visit: http://www.boycott-wendys.org/take-action/