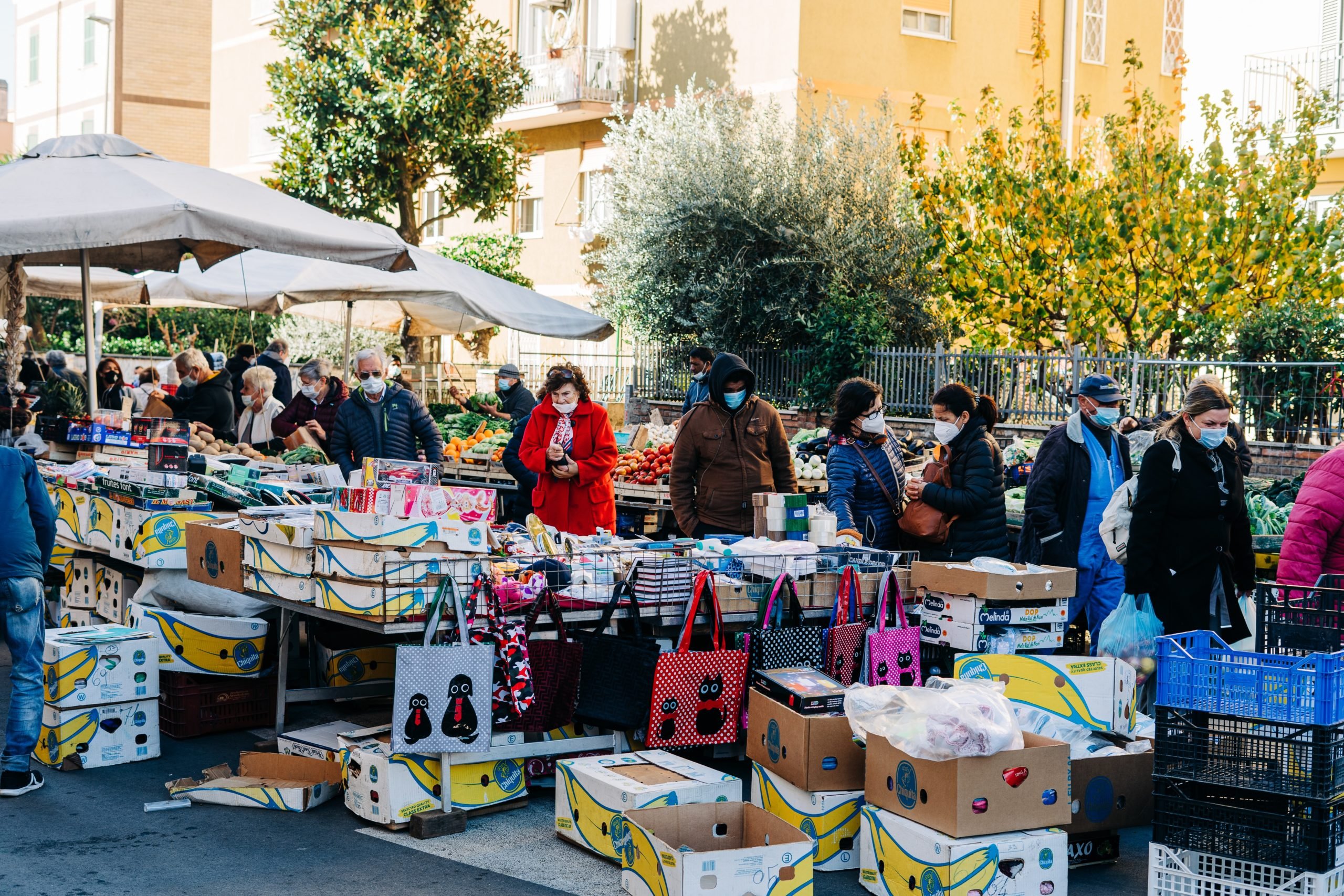 It might come as a surprise to you that the United States is not among the 24 countries that have defined access to nutritious and affordable food as an inalienable human right. If our government did acknowledge the right to food, it would have to also acknowledge the reality that national food insecurity is not an emerging crisis, but rather one that we have been floundering in as a nation for decades. This pandemic and the destruction it has caused have shone a spotlight on the ways in which our food systems are exacerbating inequalities and food insecurity, while offering a critical opportunity to change course and recommit to our values.

In this blog series, WhyHunger explores the state of food insecurity in America and the human right to nutritious food, utilizing the Right to Food as a framework to highlight specific communities that are both the most impacted by hunger during the pandemic and the ones creating lasting solutions to hunger.

The Current Moment
The causes of the ongoing food insecurity crisis, as FIAN International explains, are manifold but interconnected. An increasingly polarized political landscape in the U.S. has continued to dismantle social policy resulting in a frayed social safety net, where people experiencing hardship cannot count on government programs, like SNAP, disability, and unemployment benefits, to help them meet their immediate needs. The reduction of standards of labor protection has led to exploitation of workers for profit, while policies favor industrial food production at the expense of small farmers, small businesses and the health of the planet. Racism and structural inequality built into all of our systems, from housing security, labor protections, education, healthcare, and more, all converge to guarantee that Black, Indigenous, People of Color (BIPOC) communities face food insecurity at higher rates and with even fewer resources available to them.

In 2019, even before the COVID-19 crisis, 35.2 million Americans, including 5.3 million children, already lived in households lacking affordable, nutritious food. Now, challenges with food insecurity have been intensified, both on a household level because of reduced work hours and unemployment, and on a national level. Particularly at the onset of the pandemic, grocery store aisles famously went bare while dairy farmers were forced to dump their products due to disruptions in domestic food supply chains caused by a sharp decrease in demand by shuttered restaurants, schools, and businesses, Covid outbreaks at meat processing facilities, and sudden spikes in demand for shelf-stable items. It has reached the point that 1 in 4 Americans is now food insecure and worrying about where their next meal will come from.

Although food insecurity is rising around the country, the incidence of hunger is, predictably, not evenly distributed across our society. Certain communities are bearing the brunt of this burden, particularly BIPOC (Black, Indigenous, People of Color) communities and specific groups that have already been struggling with higher rates of food insecurity due to systemic discrimination and policies of unstable and unlivable wages, housing and employment discrimination, healthcare disparities, accessibility challenges, lack of investment in communities, and unequal access to healthy and affordable foods.

In 2004, the Food and Agriculture Organization (FAO) Council formally adopted The Right to Food framework, which defines access to adequate food on a regular basis as “a basic human right” and provides guidelines to states on how to ensure the fulfillment of this ideal. The Right to Food framework is structured around the belief that strategies aimed at eradicating poverty must be centered around the needs of the most vulnerable and/or excluded communities, and that in so doing, the positive effects will ripple out to reach all segments of our society. The framework reiterates the need for intersectional collaboration across organizations and agencies, as well as the tracking of metrics to quantify impact and identify the communities most in need. Further, it expands the role of government in regulating uncompetitive markets and protecting the sustainable use of natural and economic resources, especially those that belong to Indigenous communities. It acknowledges the fact that governments bear a duty to ensure its citizens all have adequate food and nutrition, and that the only path toward making this a reality is to pivot policies and practices toward supporting communities as they advance their own culturally specific needs and strategies to eradicate hunger. Lastly, the guidelines also suggest community-based initiatives, education programs, and poverty reduction strategies in order to address the root economic and social causes of hunger. WhyHunger recently wrote an article making the case for U.S. adoption of the Right to Food framework.

WhyHunger has the unique privilege of partnering with grassroots organizations on the frontlines of advocacy and food sovereignty work and, throughout this series, we will be uplifting the solutions already in play whenever possible, as well as other alternatives to combat the intersections of the hunger crisis with the Covid-19 pandemic.

PART I. THE IMPACT OF THE PANDEMIC ON THE FOOD SECURITY OF WORKERS:
With physical distancing mandates in the wake of COVID-19 creating widespread closures, the workers most affected by economic shutdowns have been gig economy workers and tipped workers in the hospitality and service industries. Significantly, these are the workers who were already living precariously in poverty or on its edge, denied protections and benefits like health care, sick leave, workers’ compensation, and stable, livable wages.

Sixteen percent (16%) of hospitality and gig economy workers were already experiencing food insecurity before the crisis. In the case of tipped workers, this is in no small part because throughout the United States, it’s legal for tipped workers to be paid less than the state minimum wage, with the assumption that tips will supplement the rest of the income. In 35 states, that wage is less than $5 an hour. Most workers live paycheck to paycheck, unable to collect savings and living in fear of bankruptcy and hunger if they suffer a medical or other unforeseen emergency.

The coronavirus pandemic has been one such unforeseen challenge. Subsequent unemployment has been rampant: Some 8 million restaurant jobs had been lost during the pandemic in April, according to the Labor Department, with 2 out of 3 restaurant workers unemployed. As indoor and outdoor dining slowly reopen but the total national unemployment rate still hovers at 6.7% with 10.7 million unemployed people, we are now seeing the slowest rate of food service growth since the pandemic began.

Intersections of race and class make BIPOC communities especially vulnerable to these cutbacks — for example, the U.S. Bureau of Labor Statistics reports that the Latinx population represents over one quarter of restaurant and food service workers. Black communities have been harder hit by unemployment rates and slower returns to work, with the gap between Black and white employment now the widest it has been in the past five years (Reuters).

While legislation through the CARES Act has made many gig economy and restaurant workers eligible for unemployment for the first time, ironically, in this time of need, millions of unemployed workers in the restaurant industry are now being told that they did not earn enough in the first place to qualify for assistance.

TIME interviewed one such tipped worker back in July, Sarah May, a 14-year food service veteran, whose claim for unemployment was denied after the bar she worked at closed its doors: “Michigan requires a worker to show at least $3,744 in a quarter to qualify for unemployment benefits. May, who estimates her hourly wages at around $4, fell short by about $171.” The cofounder of One Fair Wage, Saru Jayaraman, explained to CBS, “Tipped workers are essentially facing two systems that were set up against them. One is an employment insurance system that’s set up to deny generally, and another is a sub-minimum-wage system that has created a situation where they cannot access any benefits.”

So far we have only discussed the workers designed to be included, to varying degrees of success, within our systems. However, nearly one in six New York City jobs lost due to the pandemic was held by an undocumented worker; in California, 10% of the entire state workforce is made up of undocumented workers.These 7 million workers around the country, many of who are already facing the most layoffs due to the industries they work for — construction, restaurants, and other service sectors — are not eligible for unemployment insurance, a stimulus check, or, in most cases, SNAP benefits. These undocumented workers make up 54 percent of the total ‘essential workers’ preventing our country from coming to a grinding halt and are often risking their lives in dangerous working conditions during a pandemic. They also bear the brunt of unemployment, with their displacement rate of 54% at double the 27 percent of the private sector displacement rate.

In the case of undocumented, tipped, and gig economy workers, it is clear that direct government intervention is needed, and while organizations like One Fair Wage, Open Society and WhyHunger have stepped in to provide some emergency financial assistance based on their ability to raise funds from private individuals and foundations, this is clearly not a sustainable model. One Fair Wage has advocated for years for a government-mandated full, livable wage for tipped workers with the ability to tip on top, a law that has now been adopted in only seven U.S. states so far. Meanwhile, organizations like Make the Road NY have spoken out during the pandemic to call on their legislators for a $3.5 Billion New York State fund to reach excluded (undocumented) workers and their families.

Gig economy workers have also been taking organizing into their own hands all across the country, with, as just one example, employees of Instacart, Amazon and Whole Foods going on strike to demand increased protections, hazard pay and sick leave, and higher wages. Trader Joe’s workers have also circulated a petition calling for hazard pay and calling out the brand for insufficient protection of their health and safety during the pandemic.

Guideline 8 of the Right to Food framework states, “States should take measures to encourage sustainable development in order to provide opportunities for work that provide remuneration allowing for an adequate standard of living for rural and urban wage earners and their families, and to promote and protect self-employment.” Workers must be listened to when advocating for their own needs, including physical safety but also the ability to live securely in terms of being able to take days off, weather health or personal emergencies, and accumulate gradual wealth. Under our current economic paradigm, this criterion is not being met.

We have already spent some time arguing that this pandemic provides an unprecedented opportunity to change course. If we were to institute a Right to Food framework, “essential workers” and the workers serving our food, delivering our groceries, cleaning our streets and homes, and generally keeping our society running would not be left teetering on the brink of precarity, forced to risk their health due to insufficient workplace protections and to work every day because they “literally [can’t] afford to take the day off.” We must support organizing efforts to guarantee a livable minimum wage and benefits, push for pandemic relief for everyone who needs it regardless of citizenship status, and make clear to our policymakers that we will no longer tolerate the sacrifice of workers’ security and wellbeing. 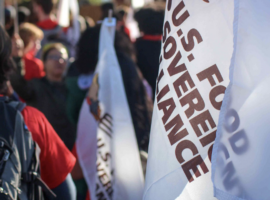