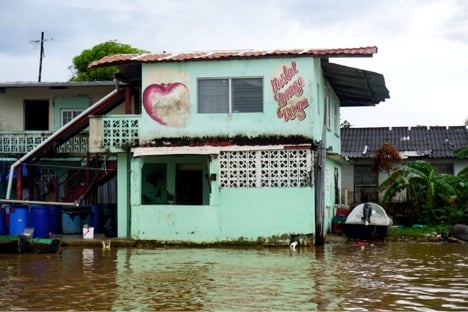 Our hostel on the island of Corazón de Jesús in Kuna Yala.

We woke up early with the sun. The rain storm from the night before that had startled us at first with its ferocity, then lulled us back to sleep with its steady downpour on the tin roof, had subsided. With no running water and our boat waiting just a few feet away, our morning routine was cut down to the essentials. We shared a quick breakfast of coffee, bread and meat with our hosts on the small island of Corazón de Jesús in Kuna Yala, the territory of the indigenous Kuna people that stretches across 365 islands off the Caribbean coast of Panama. As we ate, Taina Hedman prepared us for the day’s journey. 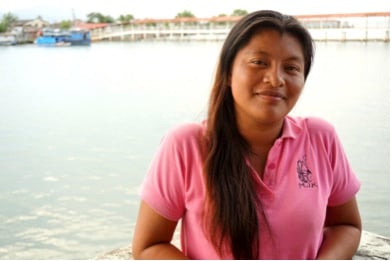 Taina is a leader of the Kuna Youth Movement or MJK (Movimiento de La Juventud Kuna) and an activist representing the rights and interests of the Kuna and other indigenous peoples on the national, regional and global stage. She explained that we would travel 20 minutes by motorized boat – a trip that takes 1 hour by canoe, the usual mode of transportation for the Kuna people – to the mouth of a river on the mainland coast, where we would journey up the river another 15 minutes or so and disembark at an unmarked trail head. As we set out to make the trip, Taina explained that she, along with 14 other women, make this journey nearly every day to work on the Proyecto de Mujeres, or the Women’s Project, using agroecological methods to farm a hectare of land deep in the jungle. The women’s goal is to use this communal land to grow crops to feed themselves, their children and their community. Their sites were set not only on self-sufficiency and food security, but on food sovereignty – the right of peoples, communities and countries to define their own policies regarding their seeds, agriculture, labor, food and land. 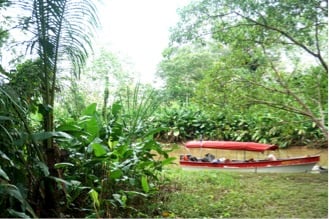 After a peaceful ride up the river, we began the hike up to the farming site. Taina and Dosalina, another of the women farm leaders, along with several men from their communities who regularly help with the farming, led the way through the dense brush. Edwin, a local man who provides technical support to the women, used a machete to clear the brush and forge our path forward. After 20 minutes of hiking, plus a short break to wade one-by-one across a river – now raging after the night’s storm — that disrupts the path, we came to a clearing on top of a hill. 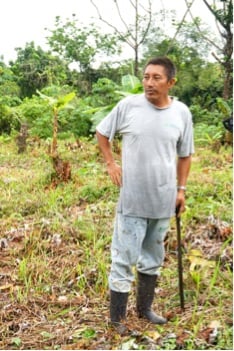 Edwin, a local man who provides technical support to the women, used this Machete to help clear the way

For those in our group less familiar with agroecology — a farmer-led method of food production rooted in traditional knowledge that makes sustainable farming accessible to everyone and empowers communities as they work together in the creation of their own solutions to produce healthy food and conserve soil — this farm site looked nothing like what you’d find in the traditional American idea of a farm. Crops like pineapples, rice and plantains were growing alongside each other, intermixed with trees and shrubs that the Kuna women strategically left where they stood through selective deforestation that would help support and protect their crops from the wild animals. Taina explained that when they harvested their first crop of arroz rojo (a type of red rice grown in highlands), six months into the project they left some of the rice behind, knowing the birds would eat that rice and leave their other crops alone as they became ripe and ready.

Working in solidarity with the MJK, myself, my colleagues at WhyHunger and our partners from Hard Rock International who help raise money to support agroecology projects around the world, had come to Kuna Yala to learn about their innovative projects to grow a vibrant future while preserving cultural and political sovereignty. Standing there in the hot sun after our hike up from the river bank, one of the visitors asked Taina and her team, “How do the women do this every day by themselves? What about your supplies and food?” 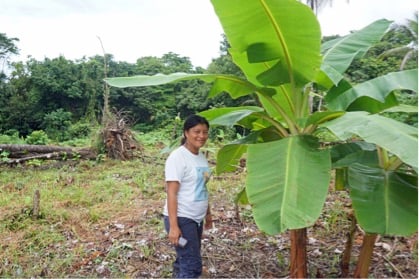 The Proyecto de Mujeres, or the Women’s Project, uses agroecological methods to farm a hectare of land deep in the jungle. Tiana poses next to a plantain tree as she explains how they used selective deforestation to clear the field.

She quickly replied, “Women and men are exactly the same, except for the gender… a woman can do everything that a man can do.” Taina explained that by changing their clothes after crossing the river and sharing the duties of carrying food, water, tools and seeds, the women had developed a system that works. They are looking forward to trying shade-grown cacao as their next crop, and scaling up this pilot project to secure more plots tended by more women. Their goal remains to diversify the diets of their community with increased access to healthy food, grown by the Kuna. When asked what they need to take this project further, the consensus was clear – more seeds, more shovels and food sovereignty.