In mid-November of last year, a visitor from Liberia arrived at JFK airport with the intent of learning from the efficacies of the American food system. An Officer of the Multi-Stakeholder Forum for Urban and Peri-Urban Agriculture (UPA) in Liberia (described below), Franklin King’s purpose in the US was to pursue exchanges relevant to key issues in Liberia’s agricultural reform. Under the aegis of several international organizations – the Resource Centre on Urban Agriculture and Food Security (RUAF), CARE and Welthungerhilfe – Mr. King’s visit was to contribute to the completion of a policy narrative in the form of a booklet that lays out the steps to sustainable urban agriculture development in the Liberian city of Monrovia.

This autumn had marked the start of my internship at WhyHunger as executive director Bill Ayres’ policy research intern. I have been learning a lot about our often taken-for-granted food system, and the interconnectedness of food with environment, economics and politics. What follows is my consideration of Mr. King’s brief visit to the US and the implications of his encounters. New to the food movement when I arrived at WhyHunger, I was surprised and a little uneasy to learn how little I knew about how the U.S. food system works. I myself have been complicit in the belief that the American food system can be self-sufficient: the ubiquity of food had been enough to convince me of its sustainability. Coming from a background in political economy and development, I’ve begun to see that the politics of food are inseparable from politics in general and must be placed in the context of environmental justice, geography and economics. 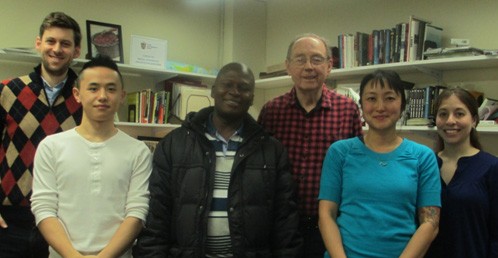 I was in an elevator when Mr. King, who I had not yet met, also asked for WhyHunger’s floor. We introduced ourselves and he was congenial enough, but as I discovered, there was more to Mr. King than meets the eye. Beneath his stoic veneer, Mr. King had warmth and humor to his personality. Notwithstanding how little he knew of the places he would visit, Mr. King managed well on his own. He put me to shame for my Minnesotan lack of knowledge of the subway system and NYC: there were several instances when we would have to run to make our appointments with whomever it was we were meeting. Mr. King and I would share a few laughs; he would tease me, and I would apologize for rushing him. But I was exceptionally fortunate to have spent so much time with him, realizing that he has seen and lived through so many things that would be incomprehensible to many Americans, and that he is also a very crucial figure in his country.

Situated on Africa’s west coast, Liberia is a small country, sharing a unique history with America in that it became a settlement of freed slaves. The Americo-Liberians’ occupation of indigenous land saw the emergence of social, economic and political gaps between the settlers and the indigenous Liberians, resulting in a civil war. With Ellen Johnson Sirleaf as the newly democratically-elected president, Liberia remains in a transitional phase in its development. The Multi-Stakeholder Forum for Urban and Peri-Urban Agriculture is a branch of a global movement that has gained importance in bringing together community/international-level organizers and organizations, farmers, vendors, non/political actors, to facilitate and identify the many types of needs in project management and policy developments. Mr. King, who is the officer of that branch in Greater Monrovia, works within a framework that links urban poverty with food insecurity.

Because the rate of urbanization (2010-2015) in Liberia is 3.4% annually, with nearly 48% of the total population urban, building Liberia’s capacity to account for this urban demographic in a post-civil war period must emphasize food and nutrition security, strengthened value chains, markets and institutions to implement responsible infrastructural development. Among Liberia’s top priorities is developing comprehensive policies to appropriately finance youth programs, training programs, and acquire more resources to shift the balance of power in favor of those relatively lacking in means of production (i.e., skills, capital, credit, land, tools). These programs would greatly benefit the women who make up 75% of all Liberian farmers. As stressed by Mr. King, this is a self-determination that will change the Liberian dependency on food imports and build resiliency. Partnerships between Liberia and American universities and agencies (including the University of Wisconsin-Madison and the EPA) and other international organizations (such as Rodger Cooley’s International Urban Agriculture Network) can facilitate the flow of ideas and engender innovation to manage new challenges. Developing indigenous incentive structures (by supporting initiatives that favor low-scale farming, and provide markets to correctly reflect the reality of Liberia’s demand for its resources ), soil management such as vermicomposting (composting with worms, which is already a practice in neighboring countries in West Africa) and exchange-learning programs and collaborations between universities and organizations, will increase the proportion of development that is sustainable, socially inclusive and visionary.

In addition to New York City, where he was WhyHunger’s guest, Mr. King traveled to Chicago, Milwaukee, Iowa, Madison and Boston, where he met with a host of academics, field organizers and officials. While Mr. King had come to learn from the US system, what he experienced as he interacted with American experts, scholars, activists, organizations allowed him to formulate important critiques of it. Yes, food is plentiful in America, but who, exactly, has access to it? How is it possible that 50 million Americans are food insecure? Is eating whatever kind of food acceptable so long as it fills one up enough to not feel hungry? Or do the hungry have no choice in consuming nutritious foods? And what about the consequences of government subsidies to supplement farmers, via direct payments? Subsidized crops, such as corn, soy, wheat, cotton and rice? Prices of foods? Spurred by meetings with Professor Nevin Cohen of The New School, Chicago’s Erika Allen and that city’s food policy council and Will Allen at Growing Power in Milwaukee, Mr. King’s journey will not end when he returns home; indeed, it has been crucial, he says, to making him a more discerning agent of change. For it is Mr. King who will be in charge of reconciling academic and grassroots stratagems with the real world processes he encounters back home.

Our complacency in maintaining the status quo of the industrial food system, I’ve found, is rife because infrastructural inefficiencies are not easily discernible when we are too close to them. Those like Mr. King who come from countries that have been outside of the global food system for so long (in the case of Liberia, due to civil war), are better equipped to assess different models of agricultural development and weigh choices for the future.