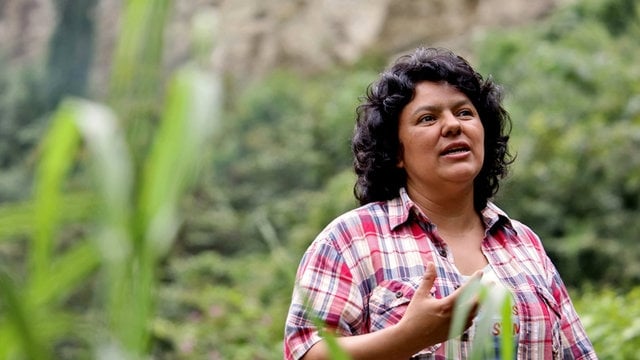 Early today, March 3rd, armed men killed Berta Cárceres. They swarmed her home and assassinated her. One more woman activist killed, among too many others in Central America. They took the life of a Lenca indigenous woman, a leader and a comrade. Berta was a brilliant person, capable to articulate complex issues and to inspire millions. She was a daughter, a sister and a comrade. She founded and served as the general coordinator of the National Council of Popular and Indigenous Organizations of Honduras (COPINH). Taking away the physical presence of Berta from us will not stop her from giving us strengthen to free all rivers from dams and free ourselves from greed, patriarchy and violence.

Able, like a river
that takes alone
the canoe that tires
of being a route  to hope.
From the clear cleanse
the heartbreak stain
as a river that carries  and cleanses.

Grow to deliver
in the silent distance
a power of song,
a river deciphering
the soil’s secret.

If it’s time to descend,
keep the gift of strength
stop not to advance.
And vanish even
underground,
learn to return
in the course to accomplish
the craft of Love.

Accept like a river
these sudden swells
of impure Waters that bring up
hidden
the truth of the deeps.

As a river, born
from others, learn to follow,
with others staying
in others stretching
to build the meeting
with the great Waters
of the boundless ocean.

To change in moving
not stopping to be
the same changing being.
Like a river.

Berta Cáceres was awarded the 2015 Goldman Environmental Prize for defending the environment at great personal cost. Hear about her work in the video below.