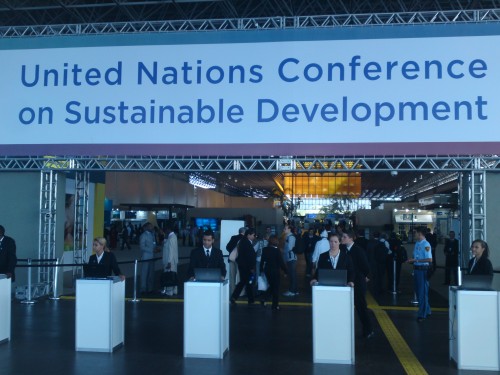 I am writing from Rio de Janeiro, Brazil, at the 20th UN Commission on Sustainable Development Summit. Called Rio+20, this is the largest global summit on sustainability and development. Nearly every country is participating, with delegations numbering in the hundreds and even thousands—all debating the future of human society. Because the world is now so connected, the big questions about our economies, our societies, our environments, our problems and our solutions have to be discussed as a global community. The principle question every government is trying to answer is how all people can continue to grow, develop and improve in ways that end poverty and promote fairness without destroying the environment.

When I arrived, I had only a general understanding of the issues to be debated. I wanted to hear from others and to share WhyHunger’s position: that strong local and regional food systems based on ecological principles can end hunger, create jobs and protect nature. But I soon learned that the discussions were much more complex.

An end to hunger and poverty? The world is currently divided into rich (“developed”) and poor (“developing”) countries. The “developed” countries achieved their high standards of living, technology, infrastructure, education, skills and wealth largely through ecologically destructive means which “developing” countries cannot realistically duplicate. As is often said, we would need six to seven Earths to provide the resources for all seven billion people in the world to live like the residents of the US and Europe. (www.footprintnetwork.org) “Developing” countries, which make up more than half of the world, will have to progress in a sustainable way.

Some countries, including the US, treat the problem of how to end poverty and protect the environment as more of a philosophical question than a practical one. In fact, the US delegation has resisted making strong commitments at Rio+20. For other countries, like many of the world’s small island nations, questions of poverty and the environment are incredibly pressing, as many presidents and prime ministers face the possibility that within a generation, their countries may be completely submerged by rising oceans.

Ending hunger and poverty, while officially the aim of the summit, does not appear to be so important, unofficially, to many of the governments here. Every country has an exhibit outside the summit to show how each is working towards sustainable development. The exhibits of almost all of the developed nations showcase new energy-efficient technologies they had developed to help consumers. When poverty is the focus, the solution most commonly proposed is for poor countries to adopt better technology, in order to indirectly end poverty by creating jobs.

However, many developing countries do not have the money or the capacity to implement these advanced “sustainable” technologies, and developed countries have resisted efforts to fund appropriate technology transfer.  Also, despite growth of sustainable technologies, the economies of developed countries are incredibly environmentally destructive. The US, for example, still relies primarily on coal, gas and oil to power homes and transportation, grow food, and maintain our economy. If the richest nations in the world don’t take the lead in embracing sustainable practices, how can the rest of the world be expected to?

Another way forward This is why WhyHunger’s approach to hunger and poverty is so important. Local and regional ecologically-based food systems already exist in most of the world, and are being rebuilt in the US. What they need to grow and become more stable is support from governments – including at Rio+20.

The hungriest people in the world are also the poorest, and they are mostly small-scale, rural farmers living in the Global South. Often, these farmers grow food using traditional practices, and without chemicals – what we might think of as sustainable agriculture. This isn’t necessarily because they think it is better, or because they can get a better price (as organic farmers often can in the US), but because it is the cheapest way to farm. Fertilizers, pesticides, and herbicides cost a lot of money.

Building on many of these traditional farming techniques, researchers and agricultural scientists have developed methods of sustainable and ecological agriculture that are very productive. Called “agroecology,” scientifically-based farming in line with nature is the ultimate in “sustainable.” In fact, many experts see agroecology as the way out of hunger and poverty for millions of people around the world – as well as being a way to mitigate some of the worst effects of climate change.

However, the developed countries don’t seriously consider agroecology as a solution, which may have something to do with the fact that industrial agriculture is big business, and agroecology is not. In Rio, the US is one of several developed nations actively resisting attempts to promote and support the kinds of agricultural practices that will benefit the poorest and hungriest people on the planet: farmers and their rural neighbors.

Fortunately, there are also advocates for real solutions in Rio. Some European countries including Switzerland and Norway have joined many developing countries to advocate for policies that focus on the 500 million small-scale farmers facing hunger – not only on the concerns of business in the Global North. There are also grassroots movements all over the world, including in the US, pushing for sensible agriculture policies. The world is changing, and this is an idea whose time has come. WhyHunger commits to raising the voices of the grassroots to platforms like Rio+20 and advocating for the concerns of the planet.

Stay tuned for voices from Rio, updates from the negotiations, and snapshots of street protests!