by Alison Cohen, Director of Programs 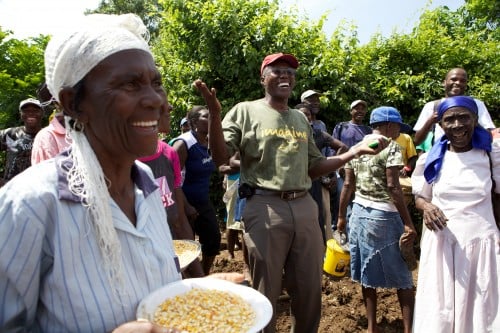 Our caravan of jeeps – five in total, carrying 17 visitors including Hard Rock staff from around the world, members of the band Tonic, a professional photographer, and WhyHunger staff – pull up to Bazzin Zim School at the end of a dusty road crippled by potholes as is the norm in the rainy season in the Central Plateau of Haiti.  We pile out of the vehicles wearing baseball caps or wide-brimmed hats, covered in sunblock and mosquito repellant.  Morning is barely upon us and the intense sun already has some of us wishing we’d brought a change of clothes.  We are indeed a motley crew much like the never-ending parade of clowns tumbling out of tiny little cars.  We’re the largest delegation that our host – Moveman Peyizan Papay (MPP) – has ever welcomed to the Bazzin Zim School’s farm in this rural Haitian village deep into the mountains beyond Port-au-Prince. 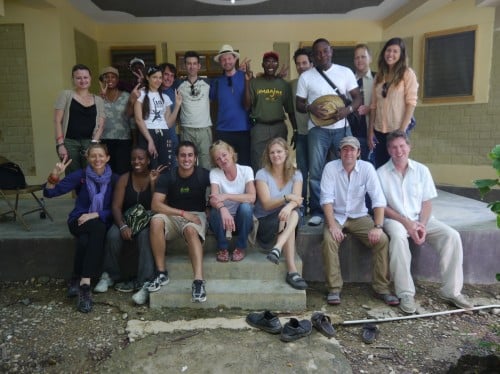 MPP has been a WhyHunger/Hard Rock “Imagine There’s No Hunger” partner for three years.  Founded in 1973, MPP is Haiti’s largest grassroots organization, and arguably one of its most successful in addressing the problems of food production, land protection and viable peasant cooperatives. MPP’s origins are in Papaye, a small community 2.5 miles from the city of Hinche, the capital city of the Central Plateau.  Papaye still serves as the headquarters of MPP, which now boasts more than 60,000 members including men, women and youth organized into smaller groups throughout the Central Plateau.

With the support of the “Imagine There’s No Hunger” campaign (a partnership with Hard Rock International, Yoko Ono Lennon and WhyHunger), MPP is working with two schools to improve the quality and amount of food available to children who are provided a meal while at school.  MPP has worked with the Bazzin Zim and Californe Schools to build water reservoirs for crop irrigation on site, and establish vegetable farms where food is grown using agroecological methods by teachers, parents and school children.  The vegetables are used in the school meals, which – until recently– mostly consisted of purchased or donated beans and rice and occasionally goat meat. 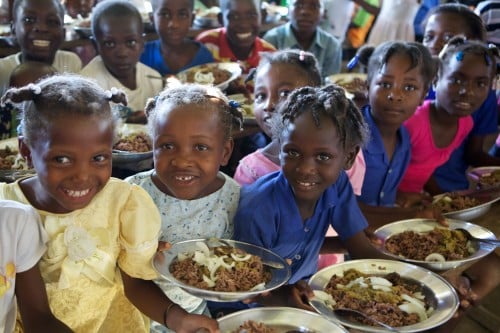 We show up at the Bassin Zim School in time to witness a crew of parents and grandparents, aunts and uncles, tilling and planting corn accompanied by a lively village band – drums, flutes, even a man blowing a conch shell – to motivate and inspire the farmers, as is the custom during planting time.  A line of men hoisting hoes over their heads strike the muddy soil in synchronized rhythm matching the beat of the drum, making for efficient but also celebratory work.  Women with seeds of 60-day corn in their apron pockets follow closely behind singing and dancing to the music, dropping a seed into the freshly tilled earth and covering it with their bare feet as they too move with flawless coordination in time to the beat.

In the coming weeks and months, yucca, corn, eggplant and greens will supplement the nutritionally slim lunch fare of rice and beans which most of the 500+ children in this rural school rely on for their primary source of food.  By the following harvest, according to MPP’s founder and director Chavannes Jean-Baptiste, the school will have little need to purchase supplemental foods for the school lunch program. 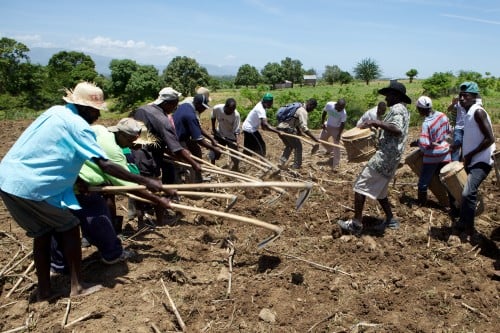 The parents, teachers and students are farming and working together to maintain the school farms. They are learning to harvest rain water and grow crops while improving the soil for future harvests with the aid of MPP’s trained agroecologists.  Chavannes – a preposterously energetic man for his 70+ years with a smile wide as the widest river and charisma to match – tells us that these same families have also begun to plant their own gardens close to their homes and are now growing vegetables for their family meals.  Evidence of home gardens à la MPP are everywhere as we drive through the countryside – raised beds made out of old tires turned inside out, goats and rabbits kept in pens raised off the ground for ease of manure collection to fertilize the gardens, rainwater catchment systems attached to thatched roofs, and worm composting bins.

And this farm-in-a-school program is only the latest in MPP’s endeavors to work toward social justice and an improved quality of life in Haiti. MPP has provided training to and organized more than 60,000 Central Plateau small farmers – considered the largest and most disenfranchised group in the country.  MPP has a training center and demonstration farm nestled in the new growth forest near Papaye.  Forty years ago this sweet little canopied spot with plenty of shade, activity and energy, was — like the rest of the Haitian countryside — denuded of trees.  Reforestation has been one of the primary efforts of MPP.  Chavannes boasts that they are responsible for working with their membership to plant more than 25 million trees. 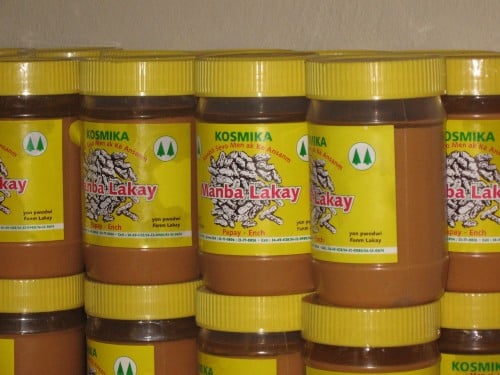 Value-added products for market constitute another project of MPP.  Peanut butter, jam, honey and a protein powder made from the leaves of a local tree used by Partners in Health as a supplement for malnourished children are all made and packaged at MPP’s central food production facility and sold throughout the Central Plateau.

And, most recently, MPP has begun to design, construct and distribute seed banks for use by local farmers.  MPP is encouraging seed saving throughout the Central Plateau so that families can increase the production of local foods from local seeds.  This practice will help Haiti increase its food security by becoming the primary authors and actors in their own local, sustainable food system that will feed more and more people healthfully for generations to come. 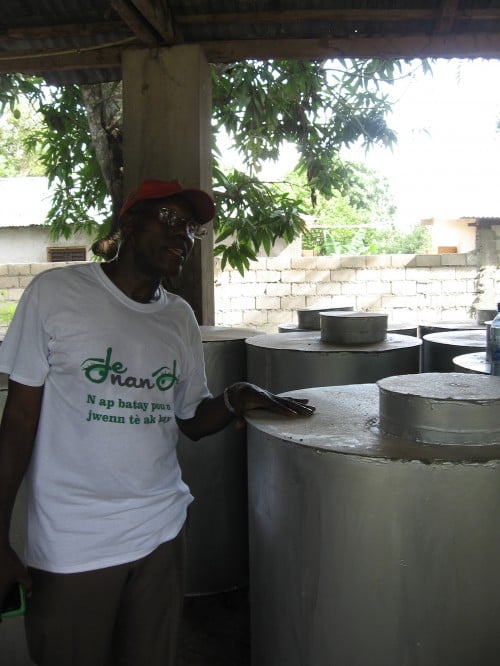 There is a common saying in Haiti: “Beyond mountains, more mountains.”  Indeed as we traveled out of the noisy, chaotic and visibly impoverished city of Port-au-Prince, we crested one peak only to be greeted by another.  It was spectacular to look to the horizon and see the rolling mountains that lay ahead.  It was also exhausting to wind our way through back roads, bumping along, swerving around potholes and mini-rivers caused by flash flooding, listening to the gears grind as our jeep shifted into 4-wheel drive to pull us – impossibly – up another steep hillside.  As Chavannes described his 40-years of struggle, triumphs, setbacks, transformation, and struggle again to educate and organize farmers and protect Haiti’s natural resources,  the hope and despair wrapped up in that ubiquitous phrase became clear.  Yet, it was also easy to conclude that no matter the scale of the next mountain, MPP would be strapping on its hiking boots and hitting the trail.