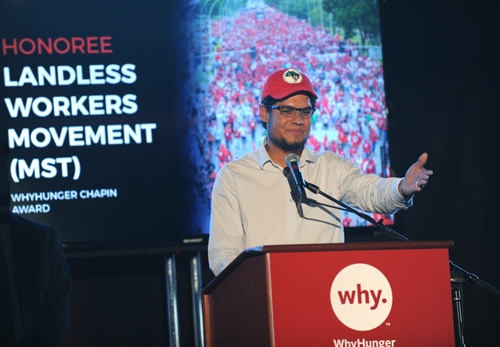 I had the pleasure of sitting down with 2016 WhyHunger Chapin Awards honoree Raul Amorim, a representative for our social movement partner Brazil’s Landless Workers Movement (MST), while he was in town to learn more about the issues and struggles his organization faces. Raul spoke passionately about the continued fight for agrarian reform, or the redistribution of land to the people for food production, and their right to land. In the below Q & A I hope you gain some insight into the issues that concern Raul and why WhyHunger believes that supporting social movements, like the MST, is key to ending hunger and building a just world. This interview is edited and translated from Portuguese.

1. Tell us a little about yourself and what you do with the MST?

My parents were very involved in the MST, so I’ve had that relationship since I was a child. At the age of 15, I began helping with educational and farming events, but was not fully involved yet. For the past 4 years I have been working with the Youth Collective, organizing against large land ownership, by taking on more responsibility, playing music/guitar during demonstrations, and working to organize on the city, regional and national level. I’m helping to get more youth involved and educated about the MST, and the issues impacting them such as education, farming/food production, racism, violence and sexism, so they know how to defend their rights for better life in the settlements. What affects them, affects others.

2. Why is it important for you to be involved with the MST?

It is in the MST that the youth and peasant farmers find a better perception of the world. It teaches them to go beyond the individual; it brings them into the movement. It is impossible to face the challenges of the world by yourself; you will get frustrated, and realize that you will not gain anything alone. Therefore, the MST creates a community where we bring change together. The MST gives us the tools to face the issues in society and everyday struggles constructively. The MST strives for building a better world. To be in a political organization is like to dream of a source of hope. In the case of the MST, we address issues of feeding the world and building an alliance between workers.

Land is a central element for humankind. Land is source and creation. It goes beyond food production. Land creates culture. It’s where we socialize. And unfortunately the fight over land and land disputes takes place because of exploitation among people. The condition of being landless is the main basis of fighting for land reform, democracy and a return to the land. When a relationship to the land is back, it opens the possibility to fight for other things like better education and schools in the communities where we live.

4. What are some of the current struggles or things the MST is pushing for?

There is currently a struggle for agrarian reform. The main goal is to end the concentration and monopolization of land so that more people can have access to it. There must be a transition to agroecology. There are 4 million families in Brazil that are landless, and that must change. It is necessary to fight back the businesses that try to take away our land.

Agrarian reform goes beyond the vision and goal of capitalism. It is our desire to have a new society that includes food production democratization. The opportunity to think about how we produce food and what we produce; and to see food as a basic human right.

We denounce the current coup d’état in Brazil and work to defeat it with large, massive mobilizations. Part of the attack in Latin America is from conservative forces that want to roll out neoliberal policies. They are operated and funded by corporations and corporate media, which select what we hear and read about. That’s why it’s important to build a broad alliance of progressive organizations. To fight against the coup we need the space and power to build a political agenda that benefits the workers. We need more political education, so people can understand the struggles in front of them and more actions to bring together everyone: students, workers, peasants, etc.

5. How can/does WhyHunger act as an ally? Why is that important?

The alliance being between WhyHunger and the MST is a very positive and necessary step to break barriers between people in Latin America and the US. It makes it easier to understand each other’s struggles and recognize common enemies. Can you imagine if our alliance was strong enough to declare a multinational boycott of McDonalds? Denounce a corporation like Monsanto? Allies are very helpful and create learning exchanges so we can share things like best agroecological practices and successful strategies to gain workers’ rights.

6. What do you look forward to in the future?

I’m very optimistic about where we’re going. When you’re going through a storm, like with the coup, it can be difficult to see through it, but what I’m seeing it more people energized to fight. More people are saying that our history has not yet ended, change can come. More people are fighting against capitalism when they learn that there are people like us (the MST) fighting. I think there will be an increased commitment and responsibility to building stronger and larger alliances with partners like WhyHunger, so that we make change happen on a number levels.

7. What is your favorite meal?

I like dishes made with corn. In the Northwest region of Brazil where I’m from, there are a lot of festive activities when harvesting. And I got really happy when I learned that corn is a symbol of Latin America resistance. It represents our strength and energy. A favorite of mine is Brazilian Couscous. It’s made with corn meal and corn flour, and is steamed and rises like a cake.

We truly appreciate Raul’s time and hope you learned something new. Continue learning about the MST and ways you can help here.