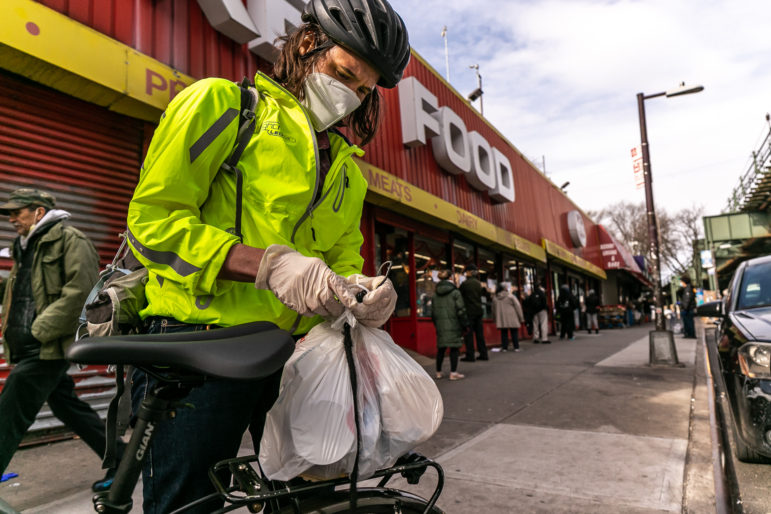 Photo by Adi Talwar for City Limits, April 2020 - Corona Couriers Volunteer, graduate student Amy Obermeyer on Jerome Avenue in the Bronx, loading her bike with groceries for a client.

While the Covid-19 pandemic has seen a dramatic resurgence in the concept of mutual aid, the idea itself has been in practice for centuries. Marginalized communities — especially those comprised of BIPOC, LGBTQIA, or disabled folks — have been relying on community self-sufficiency for generations, equipped with the tried-and-tested knowledge that government social services often systemically and systematically exclude them. Class Trouble, a collective of autonomous educators and artists, defines the term in a recent zine:

Mutual aid is a guiding principle for practicing reciprocal, horizontal, & collective care. [It is] a daily practice within autonomous communities that aren’t recognized or supported by dominant institutions. [It is] an age-old means of defying authority, of weaving tight-knit and communal subsistence & resistance, of choosing what’s right over what’s defined by the status quo as ‘legal.’

What makes mutual aid so powerful as a blueprint is that it considers individuals’ needs and capacities in order to build strong and sustainable local networks for community empowerment, solidarity, and provision of support, rather than relying on external organizations to drop in for charity. In the context of hunger, mutual aid means investing in structures building food sovereignty, rather than solely in emergency food provision (a nonetheless critical service but one that does not address the root cause of hunger, social inequality). In its very existence within a social context of capitalism and white supremacy, mutual aid is both political and radical resistance.

In its brief history of the practice, Foundation Beyond Belief explains, “For some [marginalized] groups, mutual aid means survival, especially in times when they are disproportionately impacted by disaster” (italics added). Social inequities have indeed been exacerbated by the Covid-19 pandemic, which has seen communities of color disproportionately impacted by the virus itself, as well as by skyrocketing unemployment rates and slower rates of return to employment. Mutual aid organizations connected by expansive networks have burst onto the scene, borne out of the necessity to provide vulnerable folks — particularly those who are senior, immunocompromised, disabled, or recently unemployed — with the immediate support they need to survive this crisis.

The practice of mutual aid has a rich history in the United States, as well as globally. Jacobin Magazine states that with the exception of churches, mutual aid networks constituted the most popular form of voluntary association in the US throughout the mid-nineteenth and early twentieth centuries, with one in three adult men being members of a fraternal society by 1920. It should come as no surprise that mutual aid networks were particularly strong among Black communities, as well as other communities excluded by government such as Chinese, Jewish, Indigenous, and Latinx communities. In exchange for affordable membership dues these societies provided a large range of critical functions such as healthcare, childcare, and employment within a substantive “cradle to grave” system.

Fraternal societies were significant as sites of not only economic support and professional development, but also of political alliance and cultural solidarity. Directly tied to mutual aid’s inherent political nature, the societies boast an impressive legacy in advocacy for civil and labor rights, covering everything from women’s suffrage and workers’ rights to anti-lynching legislation and desegregation, advocacy for which they historically and unsurprisingly received intense backlash and, often, retribution.

Returning to the food landscape, mutual aid has long been a tool used by agroecologists and food justice organizations striving for food sovereignty and to promote, as La Via Campesina states, “fair processes for all, not just for human beings but also for the land, rivers, air, plants, and all biodiversity.” Food brigades such as those organized by Organización Boricuá de Agricultura Ecológica de Puerto Rico in the wake of Hurricane Maria bring together “farmers, agricultural workers, peasants, activists, and educators” for a space of learning and knowledge sharing, collaboration, and solidarity. For this reason, WhyHunger works by resourcing grassroots organizations, amplifying community voices, and scaling out agroecology as a means of lifting up organizations building food sovereignty.

Despite its popularity in the nineteenth and twentieth centuries and its continued existence in specific spaces and communities, mutual aid is a concept now unfamiliar to many due to our current reliance on the ‘welfare state’ and the services it supposedly provides (emphasis on the ‘supposedly’). Yet the Covid-19 pandemic has shone a harsh light on what millions already knew: that these services are woefully ineffective, inaccessible to many, and underfunded, rendering the ‘welfare state’ a myth.

To bring the discussion back to the present day, the New York Times reports that tens of millions of employees have been laid off since April of 2020, and that by June, there were still nearly 15 million fewer jobs than there had been in February. The unemployment rate in April was higher than in any previous period since World War II, with some 30 million citizens collecting state or federal unemployment benefits, and still stood at 6.7 percent in December. Despite the wide scope of this unemployment and financial hardship, partisan quarreling has consistently stalled and weakened attempts at government aid. Criticisms have been raised that past government subsidies during the pandemic did more to alleviate the hardship suffered by multimillion dollar corporations such as Shake Shack than actual small businesses. Partisan Congressional quarrelling led to a total of only two stimulus checks of $600 each throughout the entire pandemic, leading Twitter users to note dryly, “For just 6 dollars a day, you, too, can sponsor an American.” In the background, multibillionaire Elon Musk, whose wealth increased by $46.7 billion solely over the first 4 months of the pandemic alone, tweeted to his 37 million followers: “Another government stimulus package [of $600 to the unemployed] is not in the best interests of the people imo.” Set against this dystopian backdrop, it is no surprise that mutual aid has resurged.

“When we engage in mutual aid, we are gifting each other the beginnings of a new world, premised on reciprocal, voluntaristic, and egalitarian social relations.”

While it’s difficult to estimate how many mutual aid groups are currently operating in the United States, the number is undoubtedly in the hundreds if not thousands. Mutual Aid NYC, a network that emerged within the pandemic to coordinate these groups, recently recorded a total of 76 registered organizations within the city alone, offering help with everything from grocery/home cooked meal and medication delivery to community fridges and financial relief, pet and child care, translation services, and legal and mental health counseling.

Many of these organizations either arose recently, or are the result of pivots by organizations that usually do not center direct services. WhyHunger’s Rapid Response Fund has seen partners such as Familias Unidas por La Justicia Union in Washington and the Farmworker Association of Florida using their grant money to support not only their normal work of organizing farmworkers and building capacity, but also directly assisting their workers in feeding and housing their families due to undeniable urgent need.

As the pandemic rages on, the question on everyone’s minds is: Where do we go from here? While the arrival of mutual aid to the mainstream consciousness is heartening and important, no one is arguing that it can supplement federal and state intervention. As Asamia Diaby, NYC chapter co-chair of Black Youth Project 100, told City Limits, “Mutual aid is an immediate solution to issues—it’s not supposed to absolve the state from their responsibility.” This statement is reflective of a larger issue in the United States, namely that emergency food providers, which were created to be a temporary form of disaster relief, remain a day-to-day necessity for millions given that the state has refused to invest sufficiently in addressing not only the symptoms of hunger but the systems giving rise to it.

Mutual aid networks have the potential to outlive the pandemic and serve as a step toward greater equity and local power, stronger community care, and collective advocacy to keep the pressure on the government. As Mutual Aid Disaster Relief states, “When we engage in mutual aid, we are gifting each other the beginnings of a new world, premised on reciprocal, voluntaristic, and egalitarian social relations.” Amidst all of the devastating tragedies incurred by the pandemic, the effects of shutdown and government ineffectiveness have pushed mutual aid into the spotlight, for many who were previously unaware of it, and forced our entire society to confront the reality of the myriad ways in which our systems are failing all of us, especially marginalized communities and communities of color. Within the food ecosystem, this newfound awareness must translate into actions that empower grassroots food sovereignty organizations building the networks and infrastructures all communities need to thrive.