Can you give some background on the South Africa Food Sovereignty Campaign? What does food sovereignty mean for South Africans and what are the main issues communities are facing?

The key issue that most communities, both urban and rural, are faced with is access to land. Land ownership remains very unequal in South Africa, which is due to the legacy of dispossession by colonialism and apartheid. This is still the broad basis on which all struggles in South Africa play out.

The Food Sovereignty Campaign (FSC) emerged from this broad question in South Africa – how to deal with the legacy of land dispossession, displacement, and exploitation of farmers and workers. This was the key question in 1994, when apartheid formally ended. But in 2008, when the FSC formed, these were still the central problems. 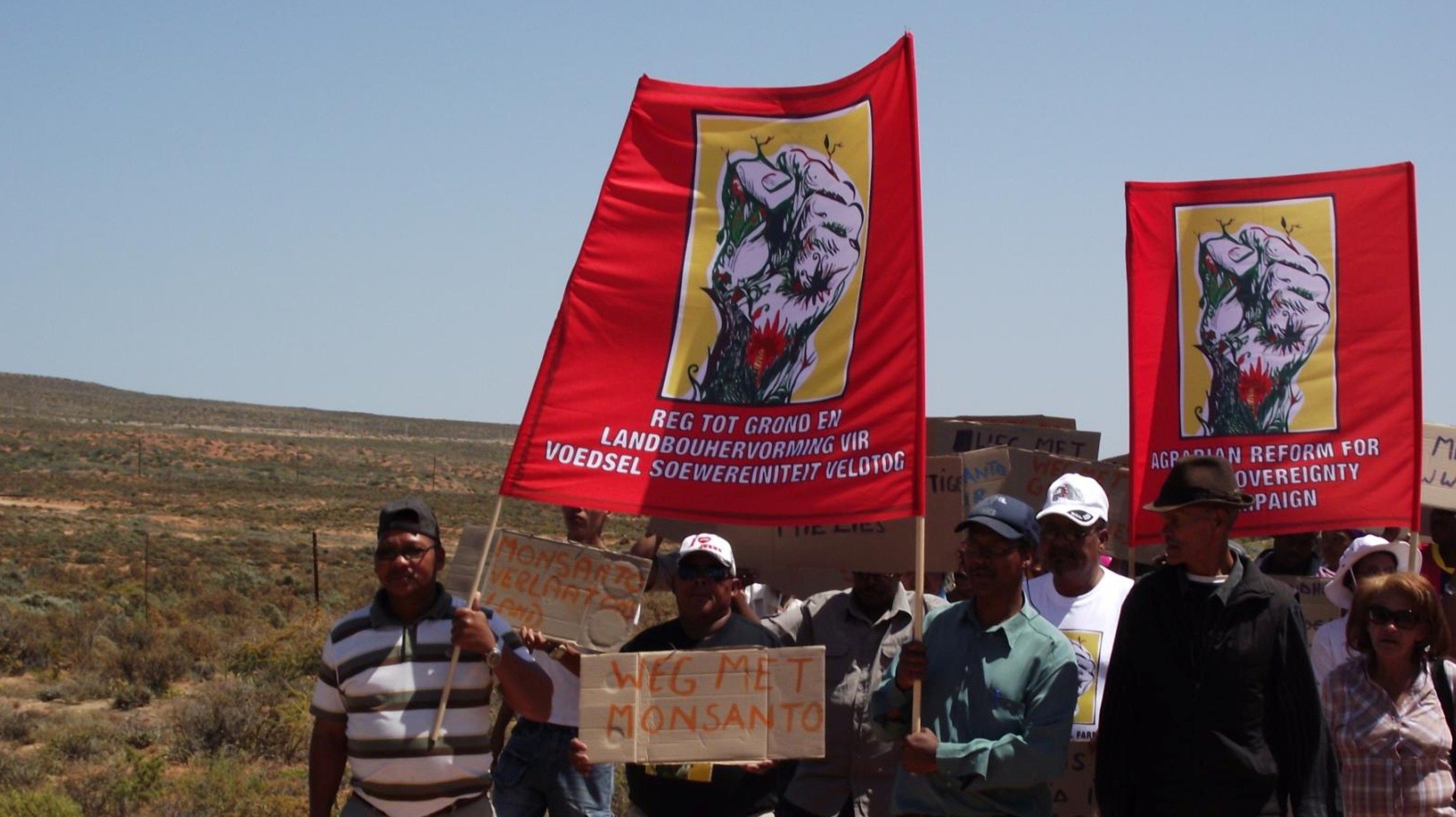 Land access is the first pillar, and agroecology is the second pillar of our platform. We push for a pro-poor agrarian reform that would ensure (1) access to enough food for everyone, (2) democracy in decision-making around food and agriculture, (3) and rights for women and children, who are so often hurt by the global model of industrial agriculture.

We see agroecology as the new basis for food production, food distribution, and food access. Organic farming has been co-opted and corporatized: we cannot put a premium on healthy food if it excludes people who are poor and working class. Food should be based on agroecological production without a premium, so that it can be accessible to everyone in society. We are working to forge a new humanity.

How are these issues facing farmers and workers in South Africa today related to the history of apartheid? How has the situation changed since the end of legalized apartheid?

The current issues facing small-scale farmers, the landless, and workers are a result and continuation of the history of apartheid. Economic apartheid has remained intact – even though voting and other political freedoms were extended with the end of formal apartheid in 1994. Since then, the government has only transferred 7-8% of all land to black farmers. So, the land ownership patterns from 50 years of apartheid still remain. 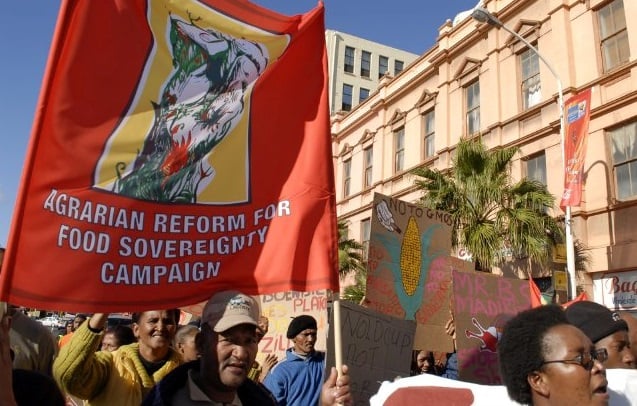 Meanwhile, corporate control of agriculture has only increased during this period, causing further consolidation and concentration in land-holdings. In 1996, there were 60,000 commercial farmers, but now there are only 35,000. So, even with land, it is virtually impossible for small-scale farmers to participate in the economy, given the current model of agriculture.

On top of this, currently, 36% of the population is unemployed (using the expanded definition), and there is a massive rate of urbanization but not enough jobs – the labor market cannot absorb all of the people moving to the cities. And so, food security, poverty, and unemployment have deepened and increased in South Africa since the formal end of apartheid.

South Africa is one of the most income unequal societies in the world, a continuity of the apartheid system. While the democratic process has been allowed, the economic structure remains the same. Currently, it is difficult to conceive of a new society when economic apartheid is still intact. A broader transformation is at stake, going beyond just land and food.

What is the legacy of Mandela within movements in South Africa today, especially movements for food sovereignty?

There are really two legacies of Nelson Mandela. The first legacy is of his work with the ANC (African National Congress) in the 1940s to the 1960s, which is a legacy of resistance to oppression. During its early history, the ANC was a conservative organization. They preferred appealing to the British Crown to end the oppression of Africans by various white governments in South Africa rather than challenging it. However, Mandela, with other militant youth, formed the ANC Youth League, and they came up with a program of action for the rights to self-determination, freedom, and political independence. They were a radical youth movement within the ANC that pursued armed struggle, among other things, and were arrested. 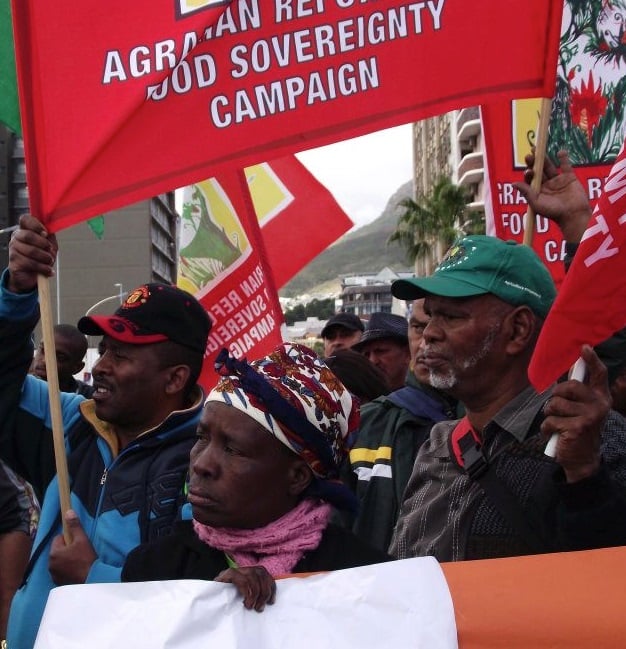 His second legacy is not as a freedom fighter, but as a President. As President, he introduced neo-liberal policies that are directly responsible for the condition of the masses of South Africans today. President Mandela and the ANC basically made an agreement to stabilize the system and keep it intact. Landlessness, mass unemployment, and poverty wages continue to be a defining feature of the democratic South African society.

Mandela will be remembered for his contribution and for actively advocating reconciliation with the objective of nation-building. But is his greatness that he avoided bloodshed in a negotiated settlement? Without broad-based redistribution, the question remains whether reconciliation is even possible. The agreements that he made are being undermined everyday, and the material basis of his legacy is increasingly becoming very thin.

So, movements are beginning to reject the second legacy, and people are drawing not just from Mandela’s earlier legacy, but from a range of liberation movements. The unfortunate part is that there was a big break in 1994, when apartheid was formally abolished, and older activists did not transfer the knowledge, history, and tradition of the struggles of small farmers and landless workers to a younger generation. So, we are learning again.

There were many others who were also imprisoned and made a great contribution – to intellectual thought, to organizing – people like I.B. Tabata, Robert Sobukwe, Steve Biko, and many others. Unlike these others, Mandela’s profile increased significantly because of the Free Nelson Mandela campaign in the 1980s. And though he was a leader of the ANC, does this alone make him great?

It is also important to remember that M

andela himself always emphasized that he was a product of the ANC; he never claimed that his leadership should be held up as the main reason for the end of apartheid. He also said,

And movements are taking this message very seriously, as witnessed by the new wave of struggles in South Africa.

People today want to reduce Mandela Day to volunteerism, depoliticizing his legacy and demobilizing the people. But for youth in South Africa, why should you volunteer for a society characterized by unemployment and injustice? If anything, we should use this day to give young people the opportunity to create a new vision for society and the tools to develop new values. Volunteering in this sense would be rooted in solidarity and cooperation for a new society.