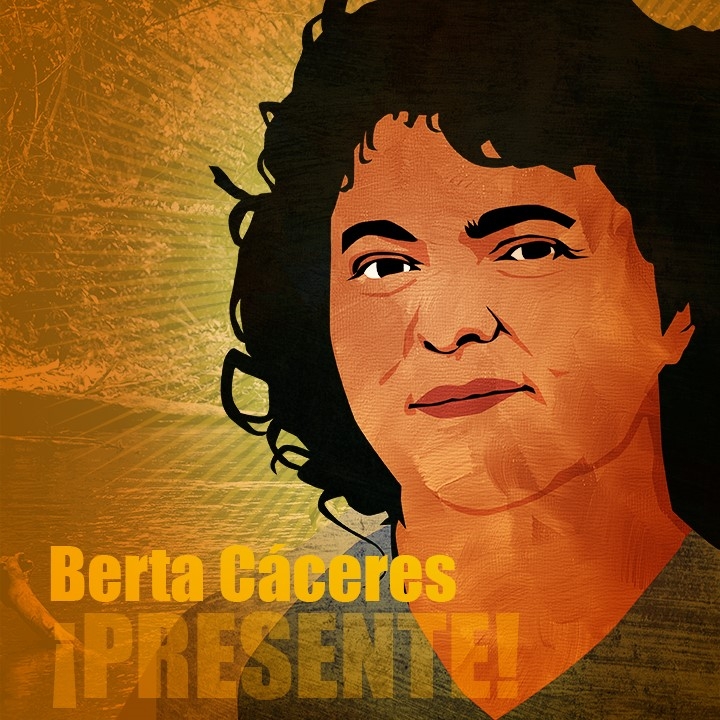 As translated by Laura Valdes

In the presence of our Bertha, our mother, our daughter, our guide.

Her daughters Olivia, Bertha and Laura, her son Salvador, her mother Austra Bertha accompanied by our family members and friends, would like to publically acknowledge our thoughts in this moment of deep sorrow.

Our Bertha is our biggest inspiration; this is why we feel the need to have the truth about her life and her struggle heard.
Concerning these circumstances, firstly we would like to show gratitude for all of the national and international solidarity we have received.

We are grateful for the support of her Lenca people, to whom she dedicated the majority of her resistances. To the garìfuna people, with whom she created a brotherhood and sisterhood for the struggles and utopias. To all of the social organizations and movements in Honduras, Latin America and the world, who have shared our pain. We are grateful for all of the genuine outpouring of affection and condolences that the people of Honduras have been offering us, which show that her struggle is a dignified struggle of the people and one that the world needs.

The truth about the crime that ended her life cannot be distorted. We know with clear certainty that the motives for her vile assassination were due to her resistance and her struggle against the exploitation of the common goods of nature and to her defense of the Lenca people. Her assassination is an attempt to destroy the Lenca people’s struggle against all forms of exploitation and dispossession. It is an attempt to end building a new world.

The circumstances of her death took place right in the middle of the struggle against the installation of the hydroelectric project Agua Zarca in the Gualcarque river through part of the Lenca village. We ask that the responsibilities of the Company DESA, which is the one that develops the project, be brought to light. We hold the company DESA responsible for the persecution, the criminalization, the stigma, and the constant death threats made against her and our people of COPINH. We also hold the financial and international entities that support the project such as, the Dutch development bank FMO, Finn Fund, BCIE, Ficohsa, and the committed companies CASTOR, and business group ATALA, responsible for her death.

We hold the Honduran State responsible for having largely impeded the protection of our Bertha and for having favored her persecution, criminalization and assassination by having opted for protecting the company’s interests above the decisions and mandates of the community. How is it possible that the police, army, and ministry of security institutions that protect the interests and installations of the company DESA are supposedly the same ones that pretended to guarantee the protection and security of our Bertha? How is it possible that the police, the army and the Honduran State that should have protected her integrity are the same ones that sent her death threats, harassed and persecuted her?

The ones responsible for her assassination are the business groups in collaboration with the national government, the municipal government and the repressive institutions of the State, who are behind the extractive project that is developing in the region. The funders of these extractive death projects are also responsible for the death of our Bertha and of countless people who struggle against the exploitation of our territories. With their money they enable the imposition of economic interests above the ancestral rights of our people.

We are not going to allow her image to be converted into an empty logo. Our Bertha is going to be reclaimed in the permanent and vigorous struggle for the defense of life, the territories and against this system of exploitation and plundering.

We want her integrity as a figure of resistance to be respected. She is an eternal warrior who fought against racism, patriarchy and the oppressive and murderous capitalist system. Her struggle is traversed by strong anti-imperialism, constantly corroborated in her international practices and her total rejection of a coup d’état financed and supported by the United States, which marked the beginning of the surrender of national territories to the transnational corporations, which in turn marked the detriment of the rights of the Lenca people and the Honduran people.

We demand respect and guarantee for physical, legal, emotional integrity for our family, for the communities, especially for the Río Blanco and for all of the people working within COPINH.

Her struggle was not only for the environment but also for a change in the system, against capitalism, racism and patriarchy.

They not only assassinated our mother, they assassinated the mother of a whole village. We call for the support of a mobilization, indictment and solidarity actions that demand true justice.

“Let us wake up, let us wake up, humanity! There is no more time, our consciences will be shaken by the sole fact of contemplating self destruction, based on the capitalist, racist and patriarchal depredation.”

Given at La Esperanza, Intibucá on March 5th 2016.

WhyHunger’s Saulo Araujo shared a reflection in an earlier blog post that can be read here.