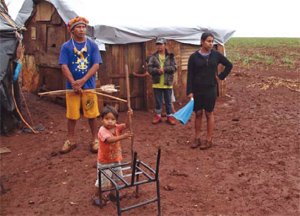 Indigenous communities displaced from their land by the expansion of agribusiness in Mato Grosso do Sul, Brazil. (Photo: Cristiano Navarro)

Today in New York City, a group of organizations who are allies of WhyHunger are launching a new report titled “Foreign Pension Funds and Land Grabbing in Brazil” that details the seedy underbelly of investments in land acquisitions in that country.

Land in Brazil has been one of the primary targets of foreign investors eager to make a profit, especially as market speculators of the raising prices of farmland. These land investments are happening despite the fact that the Brazilian constitution limits land ownership by foreign entities, both foreign individuals and foreign companies. According to the report, global investors such as the pension fund TIAA-CREF have funneled a great amount of money and assets through local companies to buy land in Brazil on their behalf. As a result, these investments are pushing families out of their land, causing poverty, the loss of livelihoods, and hunger.

Access to land and fishing stocks is critical for small-scale food producers who are responsible for supplying fresh, healthy foods to millions of families worldwide. Pushing families off their land undermines efforts to end hunger and create a just and sustainable planet.

In collaboration with the National Family Farm Coalition (NFFC) and the Center for Place, Culture and Politics at the City University of New York (CUNY), WhyHunger is hosting the International Seminar on Land Grabbing that will include the authors of the report and allies from the US and abroad. The day and a half event will be an opportunity to learn more about the report, hear the analysis of grassroots leaders from the US and globally about the phenomenon of land grabbing and its impacts, and to discuss measures we can take collectively to stop it.