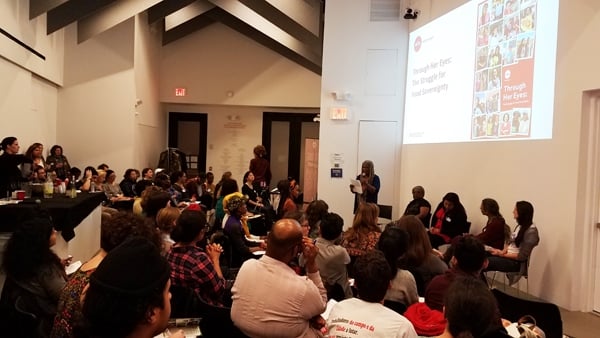 I will not forget the first time I read Through Her Eyes: The Struggle for Food Sovereignty, WhyHunger’s latest publication that “features a series of dialogues between women organizers, farmers and farmworkers who are fighting for food sovereignty in the face of industrial agriculture and bringing just and sustainable food to their communities.” The minute I opened the booklet, it did not take long before I was fully immersed by the anecdotes, the quotes and the photos of 13 working women. These different women from different parts of the world were coming together not only to share their stories about food sovereignty, but also to educate us on the realities of women in agroecology. From that day forward, I have made it my job to carry an extra copy of the publication everywhere that I go and have shared it with almost everyone, that I have interacted with.

Needless to say, I was very excited to attend WhyHunger’s event launch of the publication at GrowNYC’s Project Farmhouse in NYC. When I arrived to the venue, there were over 100 guests in attendance – students, fellow activists, funders, and community-based organizations. The night began with a wonderful live performance from The Chapin Sisters, who sang two songs, and the evening was moderated by WhyHunger Board Member, food justice activist and farmer Karen Washington. I was excited that I was going to be able put faces to the familiar names and stories I read about since four of the panelists were featured in the publication. The panelists included Chef Pearl Thompson, Kathia Ramirez, Magha Garcia, and Yara de Freitas. Chef Pearl Thompson is currently the Director of the Promise Culinary School at Elijah’s Promise in New Brunswick, New Jersey. Chef Pearl teaches and mentors aspiring chefs and bakers to continue to transform the food system. Kathia Ramirez works as an organizer and the Food Justice Coordinator for the Comité de Apoyo de Trabajadores Agrícolas (CATA – the Farmworker Support Committee). Magha Garcia is an eco-farmer and environmental activist in Puerto Rico, and Yara de Freitas is currently a member of the National Coordination Committee of the Movement of People Affected by Dams in Brazil. Every woman had a different background and experiences that ultimately led to them fighting for food sovereignty.

Throughout the event, Karen Washington asked the panelists questions such as “How does climate change affect the work that you do?,” and “What advice would you give to a young girl who wants to be like you?” The discussion ranged from the fight for the $15 minimum wage in the culinary field to the idea of seed-saving to preserve crops for future generations, all of which are interconnected within the food justice movement. For me, the most impactful part of the night came when the women were asked how they would change the male-dominated narrative and to discuss the ways in which women have been instrumental in agriculture. In response, Chef Pearl stated, “It’s really important for me to make sure that women feel empowered within the field that I teach in. How do you get women to stand up to a patriarchy that is oppressing them on a daily basis? So for me, that’s my job…to take marginalized folks – and in this case the larger percent of them are women – and to educate them…to scream, to yell, to demand the human rights that they are entitled to on this planet.”

The four panelists not only moved me by their stories and their touching words, but inspired me to do better, despite any obstacles I may face because of my gender. As Kathia Ramirez said, “we all must defeat the big 3 – colonialism, capitalism, and patriarchy,” to ensure that all women can advance and feel valued in their fields.” Both the event and the publication has made me feel more empowered and in solidarity with other women. It also exposed me to the realities that women battle on an everyday basis in trying to obtain local, nutritious food.

If you haven’t read WhyHunger’s Through Her Eyes: The Struggle for Food Sovereignty yet, you can do so here and please share the publication on your social media accounts to celebrate Women’s History Month!

Cataydra Brown is currently a Communications Volunteer at WhyHunger. She is majoring in Law and Society and double-minoring in Africana Studies and Gender Studies at John Jay College of Criminal Justice. Cataydra is very interested in the intersection of race and gender, and how it systematically affects the lives of people around the world.