In California this week, the second of the Live Real Food and Freedom Rides is making its way up the coast. You can follow the ride here and by liking Live Real on Facebook. Back in New York, WhyHunger intern Roy Frias is back in Albany starting his senior year of college after being on the first ride along with WhyHunger’s Siena Chrisman. Before Roy left, he reflected on the most powerful moments from the first ride. 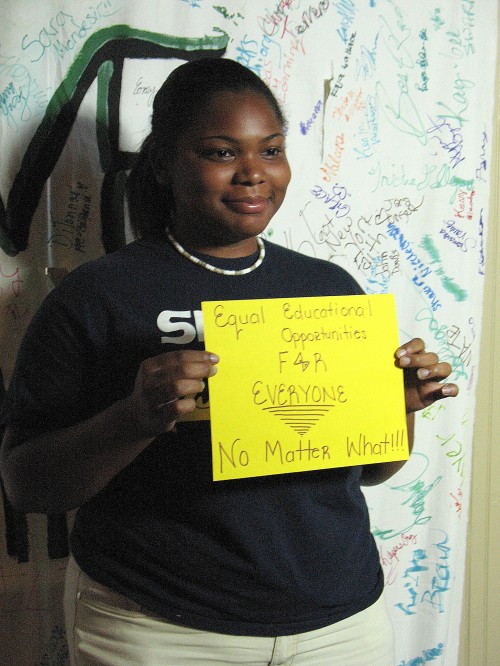 On our third day on the road, we visited Shelby, Mississippi, to give a workshop about the 2012 Food and Farm Bill.  The workshop covered the basics of what our food system is and what we want it to be.  The room was filled with about fifty or so people, all wanting to contribute.  There were families, elders, and students from local groups.  We read the Youth Food Bill of Rights and invited additions from the students. They suggested ways to get healthier foods into their diets and talked about some of the issues that Congress should be addressing to help.  They spoke about how they wanted to eat fresh produce and have more recreation centers in their neighborhood.

At the end of the presentation, Margaret Black, a member of the Student Non-Violent Coordinating Committee in the Civil Rights Era, led the group in a Freedom Song.  We sang and enjoyed the time we spent with each other.  This kind of moment of connection and solidarity is what building the movement is all about.

4.    White Cloud Reservation, KS * Day 6 Native Americans in the United States have a shared history: that of the legacy of a once proud people being lost to colonialism.  Now on reservations they deal with new problems one of the most pervasive being high-rates of diet-related illnesses such as diabetes. Keeping true to their traditions is a core strategy for dealing with the epidemic of diabetes ravaging the reservations, but it’s a challenge when competing with modern American ways of life, such as fast food.

Live Real member Brett Ramey hosted us on the White Cloud reservation in northeastern Kansas. He explained that the White Cloud reservation is well assimilated into non-Native US culture.  There is electricity and other modern conveniences, and it is surrounded by cornfields.  Brett explained that it wasn’t always that way: on what are now cornfields used to be valleys that were home to thousands of bison.  Federal laws such as the Homestead Acts divided up the land.  Families also sold their lands and further divided up the reservation. 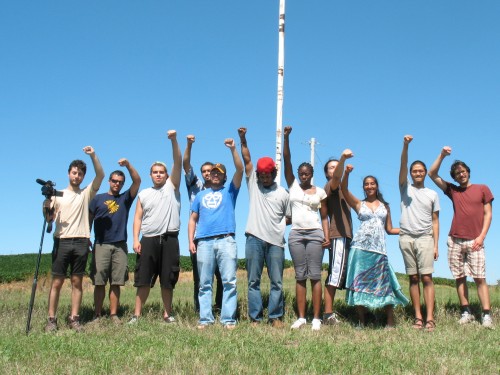 Even in this divided land, culture persists. Kyle and Alex, two young Native descendants who would rather live in a city than on the rural reservation, sang us songs in their native tongue – and one with English lyrics as well, perhaps a symbol of the divided land and their divided existence. On a hill overlooking the tribe’s powwow grounds, we all raised our fists together in solidarity because, in recognizing the brotherhood of all oppressed people, we can work more closely to throw off the chains of oppression.

3.    Community garden groundbreaking, Eupora, MS * Day 2 Eupora, Mississippi, is the home of Real Food Fellow Courtney Oats.  She works out of the Fannie Lou Hamer Center for Change and focuses on, as she calls it, “racial healing” in many forms. She talks about many tensions in her home town, some of which were evident when the Food and Freedom Riders arrived.

Courtney was arrested the day before the ride started, for reasons she and her community believes were connected to the flyers she put up around town about the arrival of the Riders, and a general distrust of outsiders in the town. After spending a night in jail, Courtney was released on bail and the Riders helped her break ground on a new community garden, just as we had planned before the arrest.  People come together for all kinds of reasons.  Coming together for food is awesome. In light of the prejudice and threats Courtney and her family are facing, planting a community garden symbolizes hope and change instead.

2.    Visit with Tyson meatpacking workers, Columbus Junction, IA * Day 8 The history of the United States has always featured tensions between employees and employers. Employers provide a living for ordinary people; employees work hard and do not always feel fairly compensated. While more nuanced in real life, the ongoing negotiations between bosses and workers paint a picture of what it means to struggle, live and work hard in this nation. 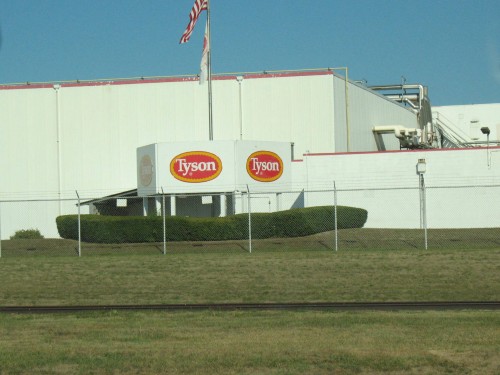 In Columbus Junction, Iowa, we heard from workers at the Tyson pork processing plant who described for us how they’re being treated unfairly. Most of the workers work on an assembly line, but it is consistently understaffed, forcing each person to work faster than is possible on repetitive and demanding tasks. Processing 800 pigs in an hour means making 800 cuts or sorting more than 800 pork pieces in an hour.

It was powerful to hear the workers sharing stories of their injuries – they suffer from wrist injuries, shoulder and rib injuries, and hearing loss. Two of the workers told of being dropped from the company’s insurance when they tried to get necessary surgery covered. Our host Carlos Rich, an organizer from the Center for New Communities, told us people work 10 years in a plant and then they’re “worn out” and won’t be hired any more. What kind of food system do we take part in that treats people like disposable parts of a machine?

1.    Seed ceremony, Monsanto, St. Louis, MO * Day 5 Monsanto means different things to different people. Many people—including policymakers—see it as a savior of modern American farming.  It’s the company that is helping to feed not just America but the world. It has invented seeds that resist pests and increase yields. It’s the company that helps farmers “produce more, conserve more and improve lives.” 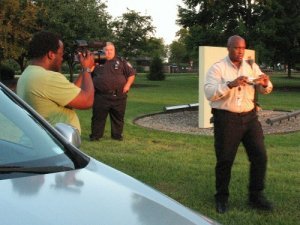 But we heard many different stories about Monsanto. It is also the company that tracks down farmers who attempt to save their seeds for the next harvest.  You know—the little guy, who doesn’t want to be forced to buy a product he used to be able to grow and save himself.

We visited Monsanto’s headquarters to hold a seed ceremony in honor of all the people who have lost their lives and livelihoods due to Monsanto. For me, this was the most powerful moment of the ride for many reasons. First, security arrived within minutes of our van pulling up in front of the driveway. It made us feel the company’s intimidation tactics very strongly. In the face of three Monsanto guards and two city police officers, our ceremony also celebrated the fact that people can protect themselves against intimidation. One of the security guards filmed the ceremony—and we resisted by having the filmmaker with us film him right back. As we left, one of the police officers told us quietly that he understood why we were protesting and that, in his job, he can’t always say what he wants to.

That moment of facing intimidation and finding support in unexpected places was the essence of the Food and Freedom Ride: we rode for a day when there are no threats or fear anywhere along the food chain and everyone has access to food that sustains them.