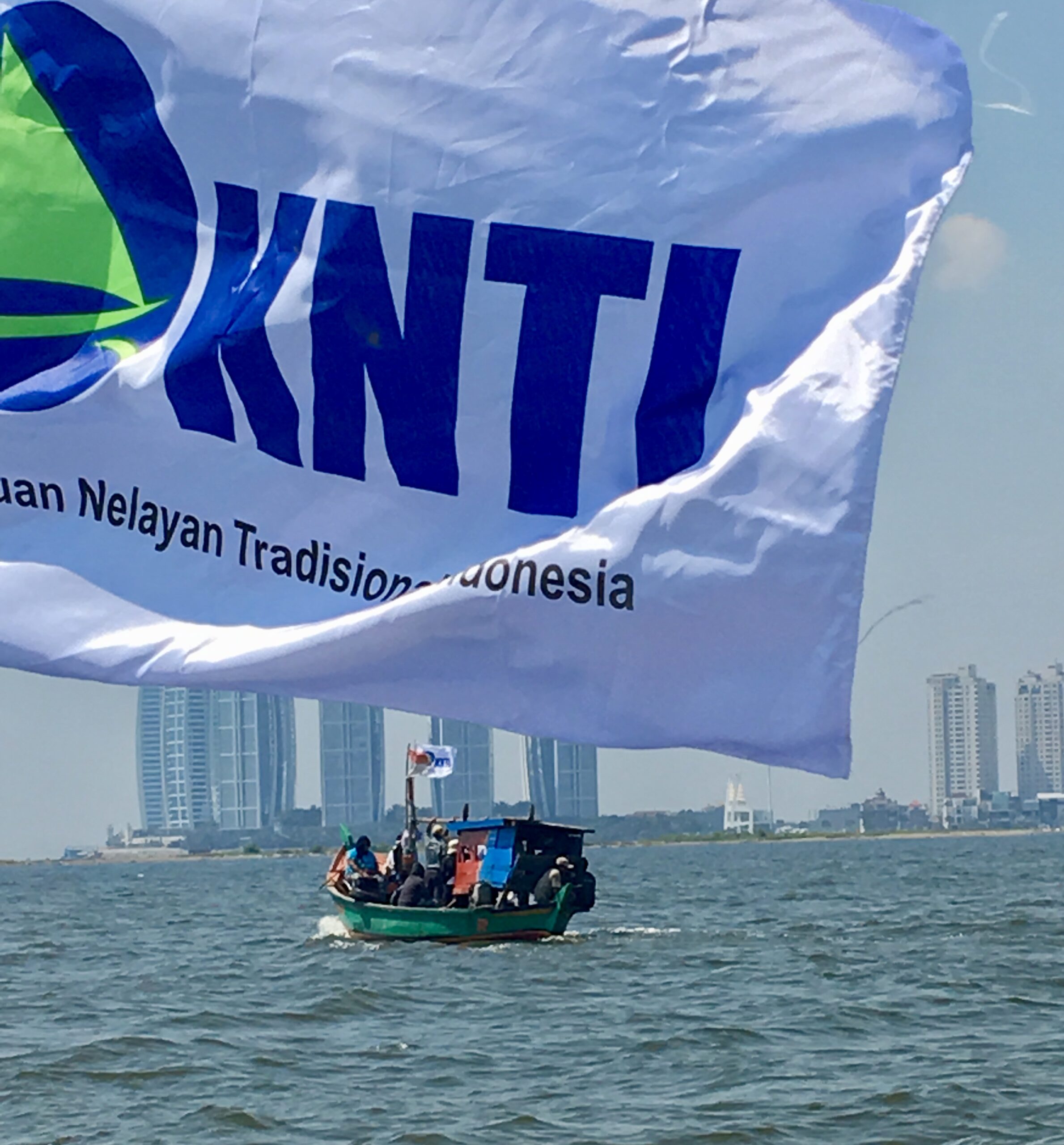 Aquamarine, crystal clear water as far as the eye can see. White sand beaches littered with nothing more than perfectly formed cowrie shells and the occasional palm tree casting just enough shadow to provide a retreat from the sun. Grilled fish and a Bingtang beer for lunch. Shopping for batik in the evening markets. This is the Indonesia of the imagination, fueled by tourists’ photos of honeymooning in Bali, and popular Hollywood movies such as “Eat, Pray, Love.”

Indonesia is the world’s largest island country, made up of more than 17,000 islands.  It is vast and, from the airplane as we flew towards Jakarta, a beautiful patchwork of blues and greens. Nothing prepared me for the dissonance I would encounter once I left the airport last summer to participate in a meeting of the Global Network on the Right to Food and Nutrition.

WhyHunger has been the North America focal point for the Global Network on the Right to Food and Nutrition (GNRtFN) for the past three years.  The Global Network is made up of civil society organizations and social movements  – peasants, fisherfolk, pastoralists, landless people, consumers, urban people living in poverty, agricultural and food workers, women, youth, and indigenous peoples –  that recognize the need to act jointly for the realization of the right to adequate food and nutrition. The Network also publishes the Right to Food and Nutrition Watch, a journal of stories and reports on the people’s struggle for food sovereignty and the right to food.

Every year or two the Network hosts an in-person meeting to coordinate actions and messaging for the years ahead.  In 2019, we were hosted by organizations and movements in Indonesia, especially FIAN Indonesia and KNTI or the Traditional Fisher Folk Union (Kesatuan Nelayan Tradisional Indonesia).  KNTI is a member of the World Forum of Fisher Peoples (WFFP), one of the three global movements WhyHunger accompanies. The World Forum of Fisher Peoples represents over 10 million fisherwomen, fishermen and fish workers in 23 countries.  This emerging global social movement advocates locally and globally for the rights of fisher people to access and manage fishery resources, to protect native waterways and preserve biodiversity.

“KNTI helped me to viscerally understand the importance of defending the right to food – that is, a government’s responsibility to put those who produce our food in an ecologically sustainable way at the center of food systems and policies instead of markets and corporations.”

It is through KNTI and the impactful site visit they organized to show us where their members live and work along the Jakarta coastline that I encountered an Indonesia rife with poverty, diminishing mangroves, and shorelines and coastal waterways littered with discarded plastic bags, cups and other garbage.  It is also through the women and men of KNTI that I encountered the fortitude and creativity embedded in strategies of resistance, the clarity of vision of a future that guarantees self-determination of fisherfolk and thriving local economies based on a healthy ocean ecosystem.  KNTI helped me to viscerally understand the importance of defending the right to food – that is, a government’s responsibility to put those who produce our food in an ecologically sustainable way at the center of food systems and policies instead of markets and corporations.

For KNTI the sea is not only a way of life, but also a source of it.  Small-scale fishing makes up around 95% of Indonesia’s fishing sector, representing an important source of nutrition and income for many communities.  Against the backdrop of a country with a trillion-dollar economy and a city that boasts multi-storied fully airconditioned malls, this vital way of life is under attack, threatened by climate change and the encroachment of skyscraper-scaled housing developments, as the leaders and families of KNTI showed us.

From shanty-like dwellings and no access to fresh water in the fishing villages, cranes speedily constructing high rise buildings along the shoreline, and large-scale corporate-owned fishing vessels on the horizon – combined they represented the KNTI struggle for the right to feed their families and communities, the right to lead a life of dignity with meaningful work and the right to a healthy ocean ecosystem that their livelihood depends on.

The brightly painted wooden boats, passed down from father to son, were outfitted with outboard motors refurbished many times over. While mostly men that captain the boats, women rake in mussels from the shoreline and process the fish caught in deeper waters.  We were invited on to the boats to get a firsthand view of what the fisherfolk of KNTI are facing in their struggle for their rights. From shanty-like dwellings and no access to fresh water in the fishing villages, cranes speedily constructing high rise buildings along the shoreline, and large-scale corporate-owned fishing vessels on the horizon – combined they represented the KNTI struggle for the right to feed their families and communities, the right to lead a life of dignity with meaningful work and the right to a healthy ocean ecosystem that their livelihood depends on.

The indignities that the KNTI fisherfolk are contending with go way beyond just those families living along the polluted Bay of Jakarta, extending to small-scale fishing communities scattered among the 17,000 islands that make up the archipelago. Almost 90 percent of the total 634 thousand Indonesian fishing vessels operating in Indonesia are considered a part of the “small fishing” category. An estimated 8 million workers are involved in the harvesting, production, processing and marketing associated with small-scale fisheries, supplying about 60% of the total national fishery production needs.  The KNTI fishermen and women who invited us on to their boats and trolled us around the Bay of Jakarta were proud to be fishing and self-identified as part of a critical movement to preserve their strategic role in providing jobs, food needs and economic opportunities.  They were equally proud of their role in protecting fish populations and the natural resources they depend on, using local knowledge passed on from ancestors as well as adapted and shared from fisher to fisher and community to community. 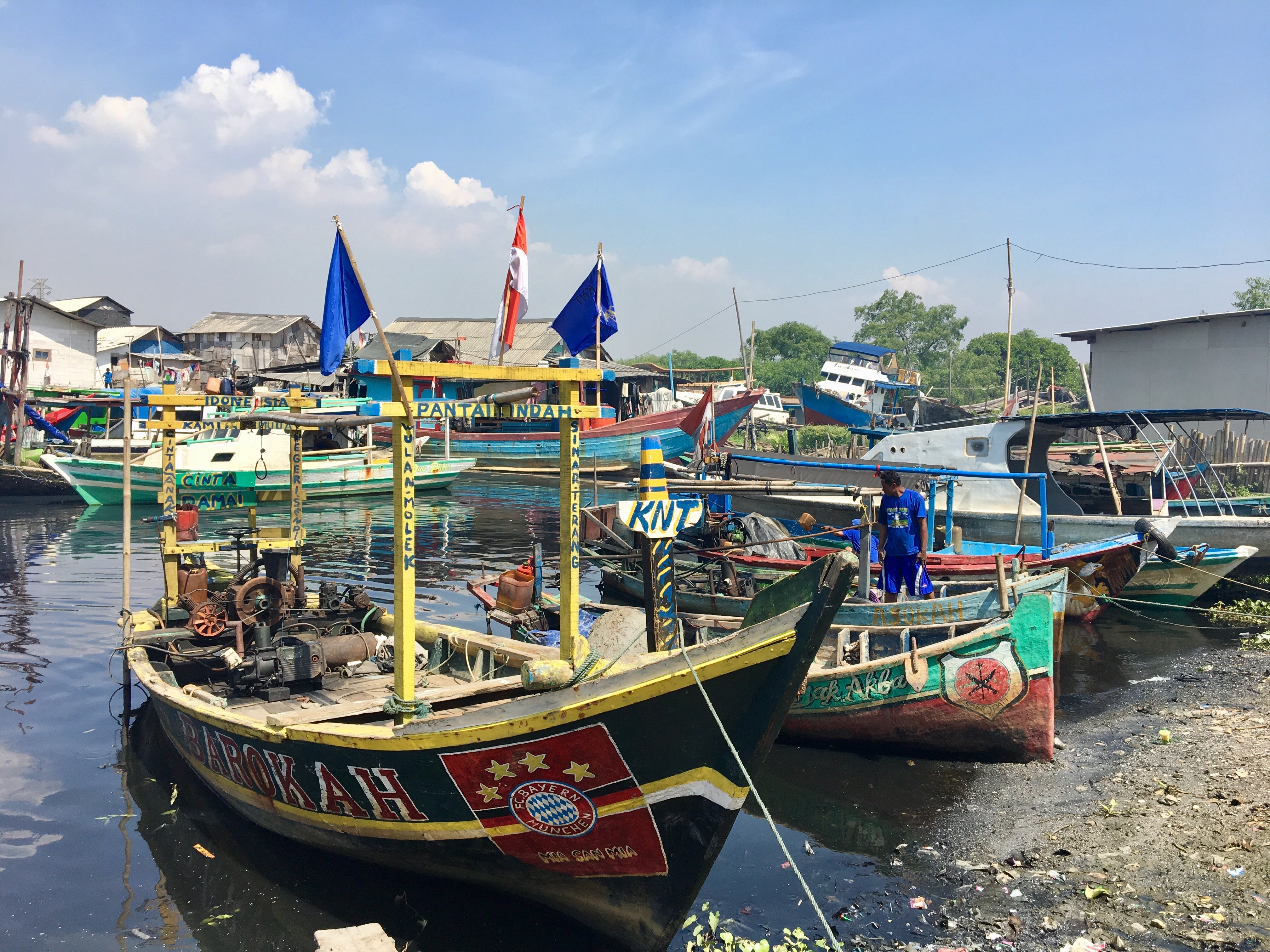 Their boats were in the dozens as we motored around Jakarta Bay, smoke billowing from the motors, most in need of a muffler.  The KNTI flags were flown proudly to signal their strong and growing presence and ever-watchful eye on the construction cranes dotting the horizon and the ships responsible for dredging sand just offshore.  As we puttered out of the marina, we passed deteriorating mangrove habitats, critical to maintaining biodiversity and plentiful fish populations, their exposed roots clogged with plastic bags.  The captain cut the motor from time to time to paddle through man-made debris floating on top of the waterway – milk jugs, plastic bottles, solo cups.

Once out on the sea and free of most of the garbage, save the occasional floating piece of plastic, the fishermen pointed out the numerous skyscrapers under construction and the sand bars that were being actively expanded into mini islands from sand dredged deep in the ocean.  The sand bars – currently no more than 30 yards long and 10 yards wide – were slated to host entire communities living in high rise apartments, complete with all the necessary shopping amenities, schools and playgrounds in a matter of a few years.  We were shown prospecting films and business plans prepared by the Chinese companies welcomed in by the Indonesian government to render these communities fully developed with bridges from the mainland to the soon-to-be neighborhoods. These new housing developments are slated for middle class families to move onto the “new islands” to enjoy convenience to the business district in downtown Jakarta.

Indonesia, it could be argued, is ground zero for the struggle to preserve a way of life that is critical to the future of not only the fisherfolk communities, but to the future of all species, including humans, that depend on the bio-diversity and integrity of ocean ecosystems to sustain life.

Mining for sand has become a significant business as the demand for building aggregate grows. Sand is used to make concrete, global production of which has grown by a quarter in the past 5 years, attributed primarily to the infrastructure needs of China and India.  And because there is not enough local supply, international trade in sand has skyrocketed.  The demand has grown so quickly that ecologists tell us we do not yet have a full accounting of the impact on our oceans’ ecosystems.  There is evidence of damage to coral reefs, further loss of already endangered species that live in or depend on oceans, as well as pollution of drinking water as sand extraction lowers water tables.

Indonesia, it could be argued, is ground zero for the struggle to preserve a way of life that is critical to the future of not only the fisherfolk communities, but to the future of all species, including humans, that depend on the bio-diversity and integrity of ocean ecosystems to sustain life.  After all, small scale fisheries account for a significant portion of the largest national economy in Southeast Asia.  More than 30% of maritime trade passes through the Strait of Malacca, signaling that Indonesia is one of the largest maritime nations in the world.  KNTI has had some key local wins, such as the Indonesian government temporarily halting construction of 13 of the 17 planned islands along the shorelines of Jakarta associated with the Dutch-backed Jakarta Bay Reclamation and National Capital Integrated Coastal Development Program.  But local wins are not enough and are beginning to feel like a finger in the dike, which is why they have joined with fisherfolk the world over through the global social movement the World Forum of Fisher People to aggregate their voices and actions. KNTI has been an important actor in ensuring that small-scale fisherfolk are well-organized and can advocate collectively for stronger legislation that protects the tenure rights of small-scale fisheries.  In addition, KNTI is rehabilitating mangrove forests that have been converted to palm oil plantations, particularly in the flood inundated Langkat district, among other ecological restoration projects. 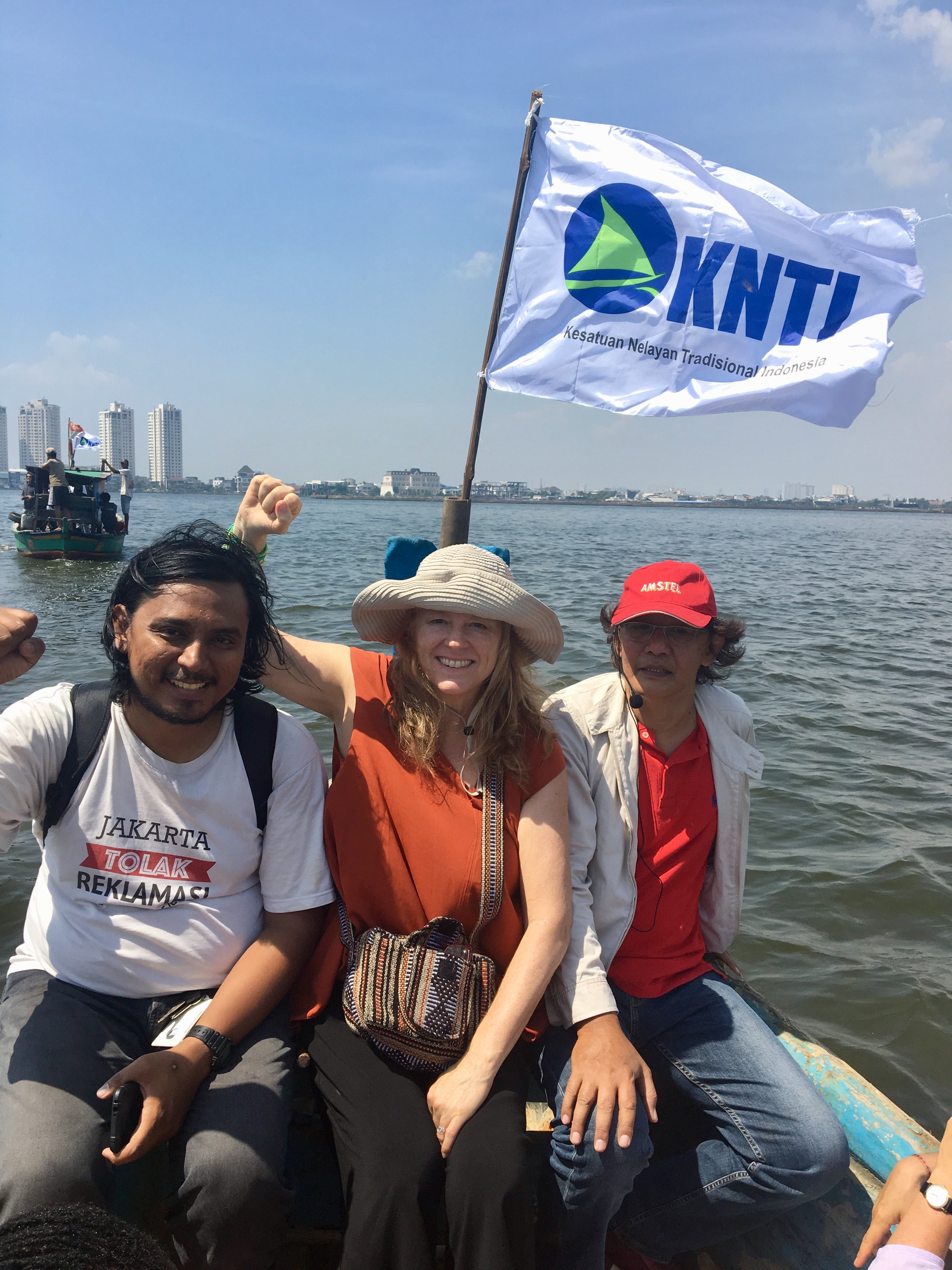 KNTI was one of the representatives of WFFP at the recent Our Ocean conference, which took place in Bali one year ago – a high-level process to secure commitments from governments, various industry and commercial sectors, civil society organizations and the scientific community to protect the ecological integrity of the ocean.  However, social movements such as KNTI and the World Forum of Fisher Peoples, comprised of those who are the longest-serving stewards of the oceans, are often not given a seat at the policy-making table.  As KNTI representative Marthin Hadiwinata said in a document presented to the participants at the conference: “Policies on marine issues cannot be addressed in the absence of fishing communities who have direct linkages to the ocean.”  He went on to explain the extent to which marine pollution deeply affects the communities living in coastal areas and small islands. “Rather than inviting fishers to share their solutions,” he added, “companies who are involved in mining and other forms of extractive industry that dump their waste into the sea are regarded as corporate partners in cleaning up dirty waters.”  It is time, Hadiwinata underscored in his written comments, while joining his voice to the chorus of millions of fishermen and fisherwomen around the world, to enact a global sanction against corporations that damage the environment and pollute the ocean, while recognizing and supporting the knowledge and practices of fisherfolk who for generations have fed their families, created jobs in their communities all while protecting the ocean as the source of life. “These sanctions,” he went on to say, “must be enacted alongside national policies in each state that mobilize resources to mitigate climate change in fishing villages, and to ensure the rights of fisherfolk and their families to coastal land, decent work, and access to fair markets.”