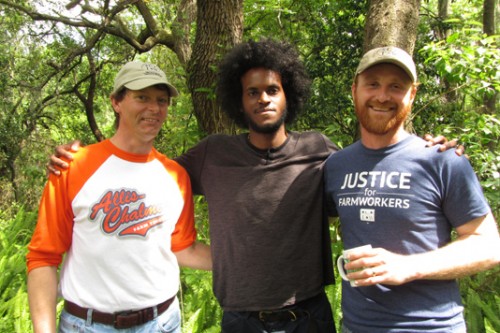 WhyHunger congratulates the winners of the John Kinsman Beginning Farmer Food Sovereignty Prize: Blain Snipstal of Five Seeds Farm near Sparks, MD and Jed Schenkier of Loud Grade Produce Squad in Chicago. A farmer and activist, Blain is part of the International Youth Articulation of La Via Campesina, the South Eastern African-American Farmers Organic Network, and the Seed Keepers Collective, and is currently working with WhyHunger on a Community Learning Project partnership on seed sovereignty. Jed helped create a rooftop farm on top of a Chicago hospital and plans to plant an urban fruit orchard.

The prize honors grassroots activists, organizers and policymakers working toward a more democratic food system in their communities. The 3rd annual award ceremony will also honor the prize’s namesake, the farmer activist and our good friend John Kinsman, who passed away in January. John founded Family Farm Defenders, a nonprofit dedicated to creating a democratic food system, and was the organization’s president since its inception in 1994. Family Farm Defenders will host the award dinner and ceremony on Saturday, March 15, at the University of Wisconsin’s Baraboo campus. The ceremony follows a one-day conference featuring keynote speaker Raj Patel, food justice activist and author of Stuffed and Starved.

For more information on the conference and award, see the Family Farm Defenders website.