This article first appeared on “Who Fishes Matters,” the official blog of the Northwest Atlantic Marine Alliance (NAMA) on August 31, 2012. 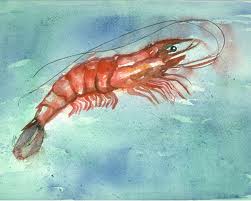 I have to be honest, my love of shrimp is deeply rooted as my ‘go to food’ when back in the day I wanted something low calorie and low fat to eat. Of course, this was in the days before we worried about our cholesterol levels. Salad and shrimp cocktail were not going to pack on the pounds.

Back then, I had no idea where my shrimp came from but my guess is that it was wild and lived in the ocean.  Now, it’s still a challenge to figure out my shrimp’s origins and on top of that I find my food choices have become more complicated.

So, it’s summer and the perfect time to eat outside, and to eat lots of shellfish. I decided I would try to get a sense of where the shrimp that I order in a restaurant comes from.

Why should you ask where the shrimp (or any animal protein for that matter) is sourced?

The shrimp we order at a restaurant is most likely farm raised. They are fed antibiotics, GMO feed or some other unnerving food source. According to Food and Water Watch, “Fish-lovers would be horrified to learn that huge quantities of fish and shrimp are now being grown in giant nets, cages, and ponds where antibiotics, hormones and pesticides mingle with disease and waste. These industrialized aquaculture facilities are rapidly replacing natural methods of fishing that have been used to catch fresh, wild seafood for millennia.”

Not sounding good to me. 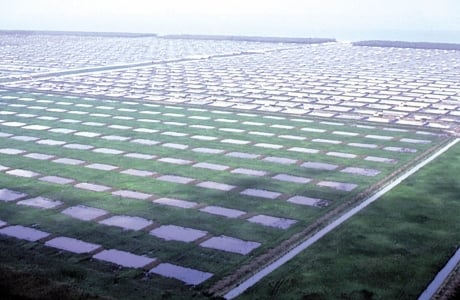 A 30-million-square-meter shrimp farm in Indonesia

In one high-end restaurant I visited recently, I asked, “Can you tell me where the shrimp is from and if it is wild or farm-raised?” The waiter came back with the answer that the shrimp were wild and from Guatemala.

Another thing to think about is that shrimp are often farm-raised in foreign countries like Indonesia, where the workers rights are questionable and the effects of shrimp farms can be devastating to their ecosystems. And, let us not forget the increased carbon footprint created when shrimp travels hundreds if not thousands of miles to make it to our dinner plate.

Seriously? I applaud the wild but why couldn’t they find a source from the United States?

Since I have been doing my own personal survey in the NYC area, I realized it was not enough to ask where the shrimp is from. I needed to go further. For instance, what about the people who helped harvest and deliver the shrimp? 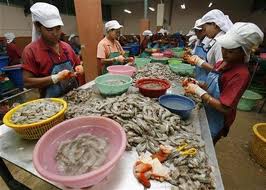 So if the shrimp have travelled the world to get to my plate in New York, was everyone involved in the process paid a fair price? I have talked to many people who know fishermen who will sell their catch for a $1.00 per pound or less, and for it then to be sold in a supermarket for $15 to $20 per pound. With a smaller portion of the profits going to the fishermen it forces them into high volume fisheries, which we know isn’t good for the ecosystem overall.

It just seems to be way more complicated than popping some tiny or jumbo shrimp in my mouth to satisfy my dietary desires. For me, I know enough about the food supply to question where my food comes from, so it is harder not to make an ethical choice.

But there is good news!

The good news is that many chefs in the New York City and Long Island area are offering their customers wild or sustainable shrimp. In my sampling of 20 or so restaurants since I started this quest to know where my shrimp comes from, I found a reasonable number of restaurants offered wild shrimp. One restaurant interestingly had both; they had wild shrimp from the Gulf for the shrimp cocktail and farm-raised from Indonesia for the shrimp skewer dinner.

Obviously, price is an issue for both the restaurateur and the consumer. The wild gulf shrimp cocktail was $17 for three. The dinner with the shrimp was $26 but it was a whole meal not an appetizer. Many consumers, including me, wouldn’t want to spend that much for shrimp cocktail. 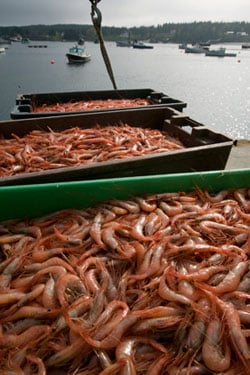 And what about the challenges of restaurants, many who are now looking for shrimp that is affordable, local, ethical… where do they turn?

Well, I learned there are fisherman cooperative groups like Port Clyde Fresh Catch who harvest their shrimp seasonally between November and April, ensuring that a fair price goes to the fishers who are also helping to conserve the resource. And as it turns out, there is a fairly abundant and healthy supply of wild shrimp in our New England waters which many fishermen in Massachusetts, New Hampshire, and Maine depend on.

I know it can be uncomfortable to ask the wait staff where the shrimp is from because you don’t want to annoy them. However, most wait staff answered my inquiry graciously. If we as consumers create demand for wild, local (as local as possible), or sustainable shrimp more restaurants will hopefully make an effort to put it on the menu. Remember, it wasn’t long ago that you couldn’t find organic chicken on a menu, but the public has spoken and many restaurants now offer it, including some chain restaurants that serve naturally raised chicken and beef.

Consumer demand for wild or sustainable shrimp can also help save our ecosystem from additional damage. Besides, do we really want to be eating shrimp that is pumped up on antibiotics, fed GMO’s, and has a large carbon footprint? If we order our food responsibly in restaurants, we can start to make a difference and stop this trend of farmed raised shrimp as the norm.

Currently many menus list salmon as wild, chicken as organic, and beef as grass-fed. I would like to see the day when its commonplace for menus to list shrimp as wild.

So next time you’re in a restaurant, ask the question and let’s bring awareness to the topic.

Pamela Flash is based in Port Washington, NY and is the Social Media and Events Support volunteer for NAMA.