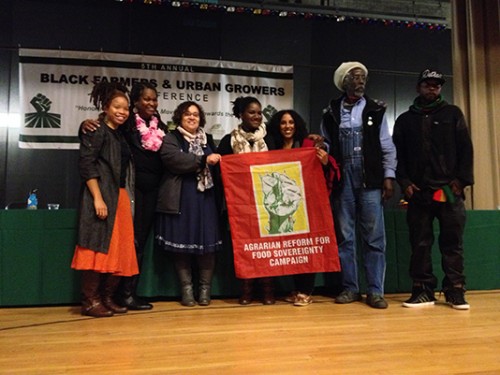 In October 2014, several staff from WhyHunger attended the fourth annual Black Farmers and Urban Gardeners (BUGs) Conference. The conference strengthens networks and inspires new ideas among people working across disciplines to address the food-related issues that contribute to inequities in health, wealth and justice in black communities. Traditionally led by the founding group Black Urban Growers in New York City, the conference traveled to Detroit this year and was hosted by long-term participants, presenters and keynote speakers, the Detroit Black Community Food Security Network. A space for growers of African descent to engage in fellowship as well as dialogue concerning food justice, land stewardship, strategies of community sustainability and homage to ancestors who grew food before them, one goal of the organizers is to move the conference to different parts of the country each year so more communities have an opportunity to participate. The conference is accepting Requests for Proposals from Black local organizing teams that would be interested in hosting the 2015 conference. The deadline to submit is February 19.

Interested in participating or hosting? Read more about WhyHunger’s experience at the 2014 conference. 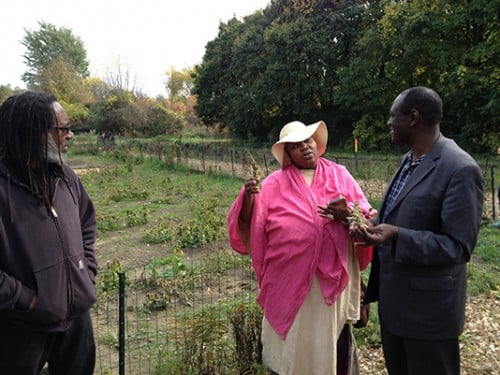 The 2014 conference theme, “Sankofa Green In Black: Honoring Our Past as We Move United Towards the Future,” focused on bridging the gap between generations and changing the perception of farming in black communities by uplifting the narrative of this lifework as a sustaining force for our people and our planet. The word “Sankofa” represents the need to reflect on the past to build a successful future. This year’s conference featured an integrated children’s conference. Local and visiting children and youth engaged in a number of games and activities connected to farming, food and black culture.

Several important threads were woven throughout this conference. First was the idea that regardless of the work we are doing in our communities, we must start with self-awareness and self-healing. That is critical to the movement. In her Friday night keynote speech, LaDonna Redmond, longtime food activist and founder of The Campaign for Food Justice, emphasized the need for people of color to create spaces for healing from historical trauma and internalized oppression; although, she acknowledged the difficulties that exist because the trauma continues today. At the same time, white people need to build self-awareness of their power and privilege. Equity cannot be achieved unless we acknowledge the role privilege and internalized oppression play in helping or hindering the process.

There was also a strong thread of honoring our ancestors who grew food before us and passed on our food heritage. Bryant Terry, renowned chef and author, conducted a cooking demo of a family recipe and talked about how family traditions and culture are passed on to us through cooking together in the kitchen. Terry lifted up the concept of cooking as an act of resistance to our broken food system. That seemingly apolitical acts like growing one’s food, cooking meals from scratch and building community around the table are crucial acts of rebellion and resistance in a runaway food system controlled by a handful of corporations.

Another main thread that defined the conference was the challenges around land ownership. Folks shared stories of land loss due to water shut-offs and extreme tax increases in Detroit, urban farms demolished by the city in Chicago and the fight to preserve land occupied by community gardens in New York. However, as it was lifted up throughout the conference, our struggles and efforts to retain land were bolstered by the reminder that land is a source of liberation for Black people and another aspect of our heritage as people of the land. Keynote speaker Barbara Norman, a sixth generation blueberry farmer in Michigan, spoke of preparing our land for future generations and teaching youth gardening to plant with power and love.

WhyHunger’s involvement at the BUGs conference serves to help weave together different food justice groups from the U.S. and abroad and touches on our personal and organizational commitment to food justice. Two of WhyHunger’s staff are BUGs members and helped organize the previous three conferences and worked with the Detroit team on this conference. In 2014, WhyHunger supported the event by bringing two of our partners from South Africa and Kenya to the BUGs conference: Herschelle Milford of the Surplus People’s Project in South Africa and Daniel Maingi from Growth Partners Africa in Nairobi. The BUGS conference was just part of their trip with WhyHunger to participate in the US & Africa Food Sovereignty Strategy Summit in Seattle and the 2014 Food Sovereignty Prize and a strategic dialogue between allies in Des Moines, Iowa.

Check out //blackurbangrowers.org/ to learn more or browse the 2014 photo gallery and consider how you and your community can get involved. The conference is accepting Requests for Proposals from Black local organizing teams that would be interested in hosting the 2015 conference. Click here to apply by February 19.