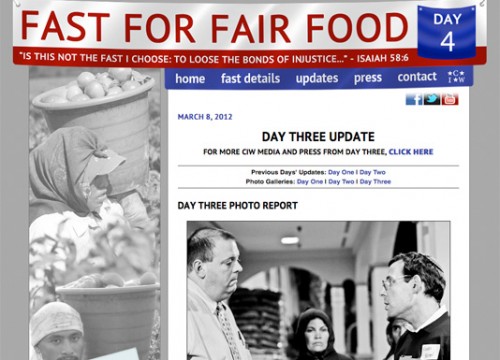 On Monday, March 5, the Coalition of Immokale Workers launched a 6-day fast in front of the Publix headquarters in Lakeland, FL.  50 farmworkers and hundreds of their allies from across the country are fasting (drinking only water)  in protest of Publix’s refusal to sign a Fair Food Agreement.  Under the agreement, Publix would pay an extra penny per pound for tomatoes harvested by farmworkers in the state of Florida.

The CIW’s Campaign for Fair Food seeks to improve wages and working conditions for Florida tomato pickers by calling on major buyers of tomatoes to pay a premium of one penny more per pound for their tomatoes, ensure that this penny is passed down directly to farmworkers, and work together with the CIW to establish and implement a code of conduct in their supply chains.

On March 10th the CIW and allies will begin a solemn, 3-mile procession to the Publix headquarters, followed by a ceremony to end the fast.

As you enter the half-way point in your Fast for Fair Food at the Publix headquarters, WhyHunger would like to share our encouragement and deep gratitude for your powerful action for fair food and dignity for all.  We know that the impact of the fast will extend far beyond Publix and beyond the workers of Immokalee—your actions get to the heart of the global struggle over the future of the food system, whether it will be one that serves people’s needs or corporate greed.  We stand with you in this struggle, and we will continue to do so after Publix agrees to do the right thing and until there is justice for all workers in the food system.