A month ago, the President of Paraguay, Fernando Lugo, was forced out of office by the right-wing opposition Colorado party. Lugo was elected on a platform of agrarian land reform that threatened the Colorado party’s interests. Just weeks after the coup, the mining company Rio Tinto signed a lucrative deal to mine Paraguay for aluminum, a deal which had been delayed by Lugo’s government. Below, Saulo Araujo, of longtime WhyHunger partner Grassroots International, features the research of Benjamin Dangl, author of many books and blogs and expert on Latin American social movements, and João Pedro Stedile, from the Brazilian Landless Workers Movement (MST), to explain why the control over land caused the coup.

As land becomes so valuable that governments are overthrown when they adopt land policies that favor the poor, farmers pay the price and hunger worsens. More and more, ending hunger means fighting to keep resources in the hands of peasants and rural people. If people cannot control the land for growing food, hunger will continue around the world. For more information, check out “Land” in the Food Security Learning Center.

Coup d’état in Paraguay: It is the resource war, stupid! 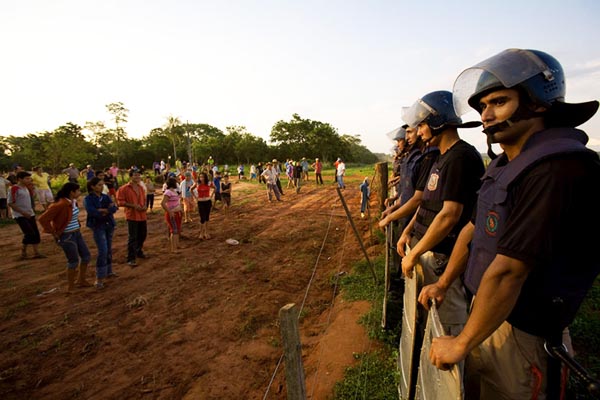 Two excellent pieces written recently about the intersection of the June 22 coup d’état in Paraguay and land issues offer a clear analysis of the core issues behind the power struggle in the South American nation. Benjamin Dangl, editor of Upside Down World and author of two books, wrote in a recent article explaining the coup d’etat and local peasants’ struggle for land:

“What lies behind today’s headlines, political fights and struggles for justice in Paraguay is a conflict over access to land; land is power and money for the elites, survival and dignity for the poor, and has been at the center of major political and social battles in Paraguay for decades. In order to understand the crisis in post-coup Paraguay it’s necessary to grasp the political weight of the nation’s soil.”

In a more blunt analysis (in English), João Pedro Stedile describes the reasons why Brazilian agribusinesses favored the coup. He mentions:

Only two percent of the population owns 85% of all agricultural land. Among the large landowners in Paraguay, foreign farmers own 7,889,128 hectares, or 25%, of farms in Paraguay.

There is no parallel to this in the world: a country that has peacefully “given” to foreigners 25% of its agricultural land. From this total parcel owned by foreigners, Brazilians own 4.8 million hectares.”

Links can be drawn between this year’s coup d’état in Paraguay and the 2009 coup in Honduras, both of which were fully supported by an oligarchy of major land holders opposed to land reform. As result, thousands of landless peasants saw their chances to have land disappear. In some cases, like in the Honduran region of Aguan, the struggle for land has resulted in death and intimidation of land rights activists. In Aguan, more than 1,500 families continue their fight for land, even after 60 peasants have been killed.

Based on Dangl and Stedile’s assessments, the coup d’état results from more than geopolitical tensions. It is very much rooted in land grabs and a corporate-sponsored greedy war for resources in general. It is not a surprise that peasants are leading the way to restore democracy in both Honduras and Paraguay.

The Via Campesina recently organized a solidarity mission to Paraguay. In the mission’s final declaration, Via Campesina members affirmed “the will power and determination of peasant and social movements to struggle for Lugo’s reinstatement and the defense of real democracy and the interests of the poor…”

The US government has yet to voice a strong position in opposition to the coup in Paraguay. It failed to take a strong position against the coup in Honduras. Considering the US’s involvement in the Operation Condor that swept aside democracies in South America in the 1970s, it would be a refreshing decision to oppose the overthrow of the democratically elected President Fernando Lugo. It would also seem highly unlikely.