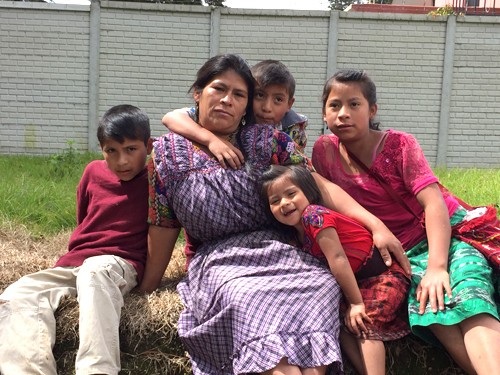 Dona Sofia and children: “”I never thought that we could become a community of strong women, with our heads full of ideas. I may not have any money but I am a wealthy woman because of my ties to AFEDES.” Photo credit:WhyHunger

The Kaqchikel women—one of 23 Mayan cultures in Guatemala—are fighting to protect their collective intellectual property rights to their traditional Mayan textile designs. Led by the Women’s Association for the Development of Saquatepéquez (AFEDES), an organization with a membership of more than 1,000 indigenous women and supported by an association of Mayan lawyers, hundreds of Kaqchikel women artisans of all ages took their case to the Constitutional Court in Guatemala City this past June. They are asking the court to push the Guatemalan Congress to enact new laws that would protect their intellectual property rights over the intricate woven designs that have become ubiquitous in the tourist markets and are a direct reproduction of their heritage and cultural identity.

Reproduction of the Mayan textiles has become increasingly controlled by just a handful of companies that hire Mayan women and pay them very little (around 10 quetzales or just more than one U.S. dollar) for a design that might take days, even weeks, to weave. The products are sold at a much higher cost to tourists and textile buyers around the world. But this isn’t just an economic issue to the indigenous women who flooded the courts this spring. Dressed in their traditional hand-woven blouses known as huipils—each design emblematic of the life in their particular community and worn every day by these women and their children as they work, play and go to school—they argued that the real value of these iconic textiles is the preservation of a way of life and the protection of a living culture.

In a recent field visit to accompany and support AFEDES and their efforts on behalf of indigenous women’s social, cultural and economic rights, the AFEDES’ Director Milivan Aspuac explained to me and my colleagues from WhyHunger that at its core their struggle is to protect the very heartbeat of Life. According to the Mayan Cosmovision, everything is connected and human beings are charged with engendering reciprocity, solidarity and harmony in all of the elements—physical and spiritual, matter and energy—that make up Life. The story of Life and the principles of their Cosmovision are revealed in the designs of the vibrantly-colored textiles that women have been creating for thousands of years—each one unique and representative of a particular time and value-system of a particular community. Protecting and preserving the way in which these designs are reproduced and the huipils worn (from adult to child, from generation to generation, from community to community) is to protect, repair and preserve Life.

There is much Life to repair in this mountainous region of Guatemala in the department of Saquatépequez, home to one of the tourist meccas in Central America, the carefully restored colonial city of Antigua which is a designated World Heritage Site. Since 1993, the AFEDES members have been organizing indigenous women throughout this state to join them in their efforts to envision a way of life that aligns with their Mayan Cosmovision while not wholly rejecting a modern world. Decolonization and reclamation is at the heart of their strategy to confront the gender, economic and racial oppression that has left them in extreme poverty and is slowing appropriating their culture. We saw evidence of the strategic ways in which AFEDES confronts oppression that reflect the holistic, complex and at times heartbreaking circumstances of women’s lives. As Milvian explained: “AFEDES can’t work only with food sovereignty or economic development or violence against women—we have to work on all these fronts because that’s the reality of women’s lives.” The struggle is arduous, the losses are many, but with each win against the oppression that the women of AFEDES describe as patriarchy, capitalism and colonialism, one more strand of colorful cotton can be woven back in to their story.

The struggle to end violence against Mayan women in the village of San José Pacul is at the foundation of the organizing work that AFEDES does in this village and dozens of others just like it. Angelina Aspuac, one of AFEDES’ organizers, tells us, “The main issue here is machismo.” Sofia’s story, who Angelina introduced us to, is representative, she said, of many of the Mayan women who have now come together to pool resources, share assets and work together to collectively improve the quality of their lives. “I never thought of becoming a wealthy woman,” Sofia said. “The idea at the start was to start a community bank to make small loans.” She explains that the men stepped in soon after and started to dictate what the loans should be used for and yet the women were still held responsible for paying the money back. Not alone in her predicament, Sofia’s husband would confiscate the loan money she had intended to use for investing in a small cottage industry to make enough money to send her kids to school. She endured regular beatings and became isolated when he forbid her to attend any more of the women’s meetings. Since she couldn’t pay back her loans, she couldn’t bring home any more funds for him to spend or invest in his own failed ventures. Eventually Sofia made the very difficult decision to separate from her husband despite the fear of retreating further into poverty. She left their home with their seven children and no money. She was emboldened to take her life in her own hands, she said, because she had the support of other women in AFEDES.

AFEDES has established “safe houses” for women when they report domestic abuse to the local police and their claims are dismissed. The police will often say the beatings are justified because the women did not prepare good food or did something else that provoked their husbands. AFEDES has become a space that abused women can retreat to for emotional and legal support. AFEDES is stretched thin in their attempt to attend to all the women who show up on the doorstep of the safe house. The organization does not yet have enough legal or counseling capacity to thoroughly support each woman’s case. But they can listen to every woman’s story with integrity and compassion and connect them to other women in their community for support. This is the first and often the most important intervention, one of the AFEDES organizers named Justiniana told us. Learning to value themselves and the other women in the community is a core aspect of the consciousness-raising work that AFEDES brings to the organized groups in each village. The issue of self-care is a part of that. “It’s important that women learn to take care of themselves so they have the energy to do the work of preserving and protecting Life,” she explained.

As colonialism ushered in western values, women began to be seen only as useful for work in the kitchen and the fields. Because of AFEDES the women have been able to organize, receive training in agroecology and homeopathy, learn a new trade and participate in leadership development. They recognize their own value and now their families and communities recognize their value. Sofia concluded her triumphant story with the following: “I never thought that we could become a community of strong women, with our heads full of ideas. I may not have any money but I am a wealthy woman because of my ties to AFEDES. I don’t have a lot of income, but I have a community and my children are going to school. My children are behind me and supporting me. My children know that I have skills, knowledge and value. Because my children know that I have value, they come to recognize their own value and their own power.”