Does ‘organizing’ sound like an overwhelming undertaking? It shouldn’t, because it isn’t – and WhyHunger’s new publication Rise Up! Organizing in Emergency Food Programs can show you how it can be done through building collective people power to transform the charity model of emergency feeding.

Rise Up, produced by WhyHunger’s Nourish Network for the Right to Food program, asked the question, “What can emergency food providers do to address poverty and harness the collective power of the people we connect to at our organizations?” WhyHunger’s partners came back with a powerful answer: “We can organize.” The guide follows the stories of four of these partners—Alameda County Community Food Bank, Bread for the City, Mother Hubbard’s Cupboard and Neighbors Together—and shows how they use organizing as a tool to champion food justice in their communities.

“Organizing is about creating an opportunity for people with the expertise and the connection with the population that are most affected to take a more active and meaningful role or a more effective role or a role that has a more tangible outcome.” 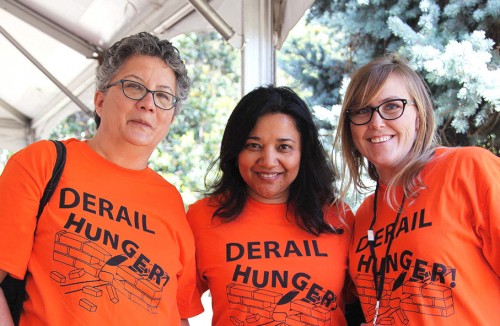 The strategies featured in the publication­—Bread for the City joining coalitions to share work effectively and show solidarity, Mother Hubbard’s Cupboard using meal time discussions to engage patrons in programming decisions, Neighbors Together strengthening their collective skill set through sharing leadership, and Alameda County Community Food Bank using personal storytelling in successful campaigns—are strategies of affirmation. They show that organizing is a critical element of social movements. When those most affected by hunger can share their own stories, experiences and become involved the solutions supported by emergency food providers, then we can create a collective with a wide knowledge base and a greater capacity to take action.

“If we are trying to end hunger and poverty, like other basic needs providers, emergency food providers are the closest to the problem, have a unique view of the problem and the best knowledge of  the situation. The folks that help us do that and the folks that are helped by what we do are best positioned to convince policymakers to do the right thing.”