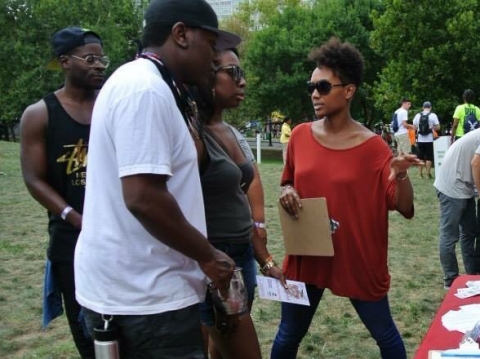 This Q & A with WhyHunger’s Beatriz Beckford, was written by the Community Food Centres Canada and originally published on their blog.

Beatriz Beckford is a force in the movement for American food sovereignty. As Director of the Grassroots Action Network (GAN) at US-based WhyHunger, Beatriz creates vital alliances and coalitions to lift up the leadership of historically marginalized communities. In doing so, she helps build power and capacity for grassroots groups to organize effectively, developing strategies rooted in the collective wisdom of communities.

A featured panelist at our upcoming event, Mobilizing for change: Lessons from the frontlines, Beatriz will share how marginalized, racialized, and allied communities across the United States are successfully activating on the ground. We’re looking forward to having her join us on the stage here in Toronto on April 1st . But in the meantime, we couldn’t help but ask her a few questions to give us a taste of what she’ll be speaking about.

How do you think social change really happens?

Change comes from the grassroots, from people who are the most affected. People closest to the issues are best adept to address them, but they’re continuously marginalized from the resources to implement solutions. It’s up to all of us in the food movement to ensure any table created is an equitable table that includes and lifts up marginalized people in the same space as think tanks and government entities.

People always talk about fixing the food system. It’s not broken! It’s doing what it’s supposed to do: it exists within an exploitative and highly extractive capitalist system. What are the things we need to do to change it so it’s not rooted in extraction of food, health, labor, bodies, wealth? What are the pathways to building food systems locally, nationally and globally that is good for and honors people and the planet?
There is a a role for everybody in the food movement: those who want to put their hands in the dirt, cook the food, change the policy, put their bodies on the line to protect the land. All of these roles are deeply interconnected and are critical to building better food systems here and across the globe.
Now is an amazing time where people are obsessed with food. How can we in the food movement capitalize on this?
This new energy and interest in food presents a great opportunity and a multitude of challenges if we are not intentional.  It’s a true double-edged sword. People love good food. There’s an amazing surge of energy around where food is coming from, how it’s grown, under what conditions, and by whom – but what happens when voting with your fork is not an option because you can’t afford it? Does your vote or your voice still count?
Equally so, people are getting creative and engaging in dynamic strategies in their own communities: we’re looking at our own food histories and food cultures. Because of the huge interest in the food movement, people are organizing and seeing the connection between food and a whole host of social issues. The people I work with juxtapose police violence and inadequate access to supermarkets; health and food access with children’s education; private companies that capitalize on prison labor.
Have you reclaimed a food tradition in your own life?
I am a first generation Caribbean-American in the US who grew up as a black girl who ate West Indian food, soul food, American food: you name it! Breaking bread with my people made me feel a deep kinship with friends and community. Privatization and industrialization of cultural foods have made some of our traditions like “soul food” unhealthy.  Now people are cooking collards that they bought from a black farmer at a market, instead of from a can, and I see that as a beautiful reclamation of our food traditions.
When you say you want to radicalize the food movement, what does that mean?
In the States, food justice has historically been rooted in policy reform. And that’s one lever we definitely need to push on to create change, but it is not the only way.  Real change requires us to push on multiple levers. We need to use strategies of disruption and direct action that directly confront issues that policy is too slow to address.  Power won’t concede without confrontation.
When we dream, build, and organize from that place — a place rooted in food justice for us all — we become a better, more strategic and effective.  That is when the food movement will have a cohesive vision of the future with a diverse variety of voices.
Tag: Food Justice