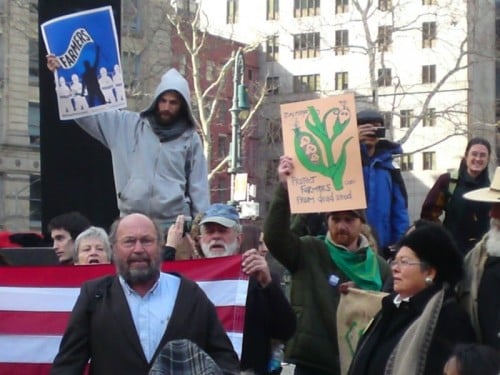 In a show of courage, calculation, and common sense, a group of organic farmers, their supporters, and their lawyers recently appeared at the federal courthouse in Manhattan to argue that Monsanto’s genetically modified seeds are a threat to the organic industry and thus to small-scale organic farmers. WhyHunger was there along with hundreds of others to support the case.

The case, the Organic Seed Growers and Trade Association (OSGATA) et al vs. Monsanto, began in earnest on Tuesday, January 31, and is a preemptive attempt to protect organic farmers from future lawsuits against patent infringement. Because seeds naturally pollinate and spread seeds, genetically modified seeds end up in organic fields, which Monsanto claims is an infringement of its patents. Monsanto routinely sues small-scale, family farmers for this inadvertent and inevitable cross-pollination. 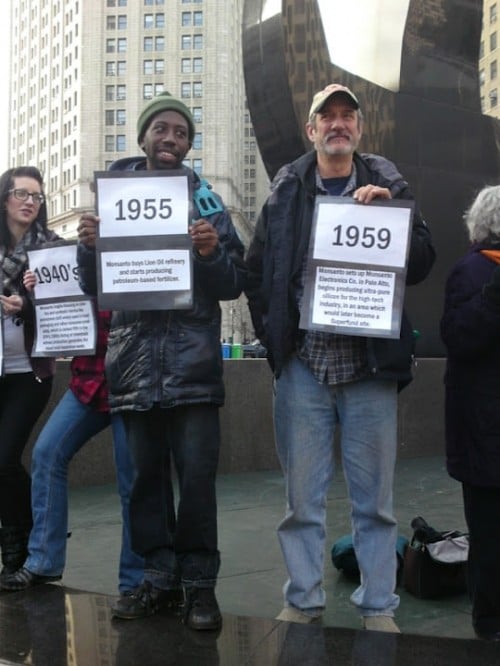 Monsanto has filed over one hundred lawsuits against farmers for infringing on its patents and copyrights on its seeds. According to a 2004 report from the Center for Food Safety, Monsanto had a staff of 75 and a budget of $10 million for just this purpose. If the organic farmers can win this case, which is a long shot because of Monsanto’s expert legal team and overwhelming political clout, Monsanto will suddenly be on the defensive.

OSGATA is arguing that because of the nature of crops, Monsanto’s patents put an unfair burden on organic farmers. Specifically, patents are supposed to only be given to products promoting a “social utility.” The farmers are countering that genetically modified seeds do not actually provide a social utility, citing health concerns, reports that genetically modified seeds are not more productive, and accounts of farmers losing their livelihoods. Additionally, when organic farmers’ crops are contaminated by genetically modified crops, the farmers can lose their organic certification, and therefore, their livelihoods. 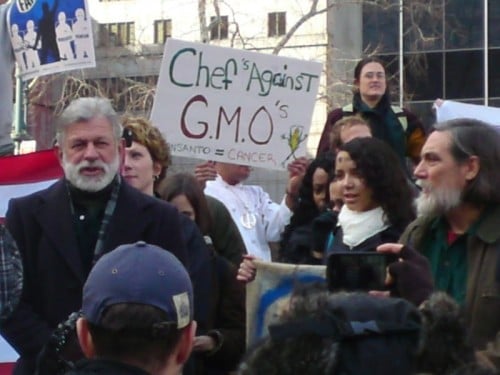 Why is Monsanto a threat to farmers and a contributor to hunger? Monsanto’s seeds, agrochemicals, and other products are developed specifically for industrial systems. Industrial agriculture does not end hunger but instead puts farmers out of business. Monsanto and others purport that cheap, processed food is the answer, but we know that growing healthy food everywhere, by as many people as possible, is key to ending hunger and creating jobs.

Our hats are off to the brave farmers and their lawyers working on this case. For more on the case, listen to this interview with Dan Ravicher, Executive Director of the Public Patent Foundation: //www.wicn.org/podcasts/audio/daniel-ravicher-all-new. Also, see the NYTimes’ coverage here: //www.nytimes.com/2012/02/08/dining/a-suit-airs-debate-on-organic-vs-modified-crops.html?_r=4.