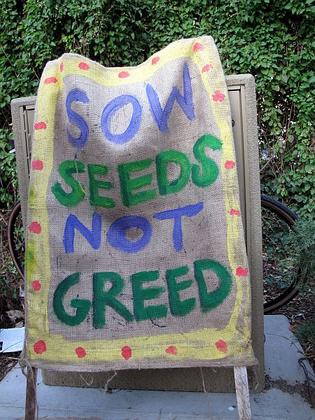 It’s been a long time since farmers congregated in downtown Manhattan — around 350 years, to be exact. The folks who populate Wall Street and rural America don’t cross paths much these days. It’s easy to forget that Wall Street used to be rural America; in 1644, the area contained so many cows that the Dutch colonists had to erect a cattle guard to keep them from straying. Livestock farmers literally established the boundaries of Wall Street.

Today, the bronze bull — that icon of the OWS movement — is the lone farm animal you’ll find in the financial district. And the barricades are back, but only to keep Zuccotti Park’s mic checkers in check. That surprisingly fertile concrete plaza has yielded a bumper crop of grassroots activists, to the discomfort of (most of) the 1% and the shills who bill them. But the voices of farmers — a.k.a. the 1% that grows the food that 100% of us eat — have been largely missing from this movement to reclaim our democracy, despite the fact that food has become a commodity that enriches a few at the expense of the many.

That all changed this past Sunday, though, when a group of farmers from around the country marched to Zuccotti Park accompanied by their allies: food justice activists, community gardeners, and other advocates for a more equitable, ecologically sound, re-localized food system.

The march, organized by Occupy Wall Street’s food justice committee and Food Democracy Now, began with a rally at La Plaza Cultural Community Garden in the East Village, where hundreds of folks gathered to hear fiddlers and drummers give the event a festive kickoff, followed by a panel of urban and rural farmers. 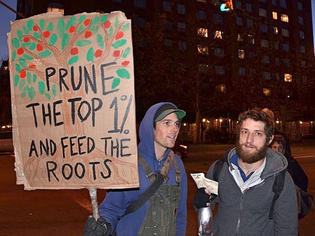 Speakers included: Karen Washington, urban farmer and the founder of City Farms Markets, who grew up just blocks away from the community garden; Mike Callicrate, a Colorado rancher and a lead plaintiff in a lawsuit against the world’s largest beef packer; Severine von Tscharner Fleming, the filmmaker behind Greenhorns and a farmer who’s worked tirelessly to promote the young farmer movement; Jalal Sabur, a founding member of the Freedom Food Alliance, which unites black urban communities with black rural farmers; renowned permaculture expert Andrew Faust; Jim Goodman, a Wisconsin dairy farmer who organized a “tractorcade” to Madison earlier this year to protest Gov. Scott Walker’s anti-union legislation; and Jim Gerritsen, a Maine organic farmer who is president of the Organic Seed Growers and Trade Association and the lead plaintiff in a class action lawsuit against Monsanto.*

Gerritsen, who was recently named one of “25 Visionaries Who Are Changing the World” by Utne Reader, noted that he had “never had a reason” to come New York City before. Now, at age 56, he came to tell organizers that “Occupy Wall Street is the conscience of America,” adding that “rural America stands behind you.”

A movement that’s been denigrated by some as a motley mob of lazy, dirty hippies got a boost from hardworking Americans who’ve chosen one of the most demanding, least lucrative vocations imaginable — producing our food. Don’t tell these folks to get a job; the majority of small family farmers have to hold down at least two jobs just to make ends meet or get health care.

Jalal Sabar expressed his desire to foster a deeper awareness of the issues facing both urban and rural farmers:

A lot of times the farmer in Iowa doesn’t know that the kid in the hood is getting stopped and frisked every day … I understand that farmers can barely survive, that they have to work a job outside of the farm … We want to make sure that the foodies understand what the farmworkers go through.

Sabar also pointed out that land grabs, a problem seen as occurring mainly in developing nations, are happening here as well. He cited the recent raid on the Morning Glory Community Garden in the South Bronx by the NYC Department of Housing Preservation & Development. (On Saturday, a protest by Occupy The Bronx at the site of the ransacked garden resulted in several arrests.)

Those of us who are running farms in different parts of the region are having to compete with the drillers and are then surrounded by the tanks and the effluent and the pipelines and the huge rigs of trucks, the millions of gallons of contaminated, radioactive water that are pumped out of these wells and the fumes that are in the wind and when you’re trying to grow gorgeous produce it’s not so wonderful. 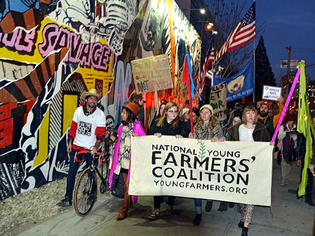 Dairyman Jim Goodman availed himself of the peoples’ microphone to explain his motivation to attend the march:

We were told in the ’60s that there comes a time when the machinery becomes so odious … that you have to throw yourself into the machinery and make it stop.

They tell me I must feed the world. But I’m not going to. I want to feed you. I want the world to feed itself. And they can. They’ve been farming longer than we have. They’re smarter, they’re younger, they’re stronger, they’re women, they’re people of color.

The corporations want them out, they want the good land. They give them the poor land. And then they say, “See? They can’t feed themselves.” A self-fulfilling prophecy.

… Take the power away from Wall Street! Remake Washington.

The rally culminated in a seed swap with farmers and gardeners exchanging packets of heirloom, open-pollinated seeds, including some donated by the Hudson Valley Seed Library founders, who’ve done so much to revitalize New York’s regional seed trade and inspired similar endeavors around the country.

Kneeling on the pavement there at Zuccotti Park, sorting through the seeds under the glow of the twinkly holiday lights, we couldn’t help feeling that the Farmers’ March was marking the beginning of a greater affinity between city and country folks. Here’s hoping the farmers won’t wait another few centuries to come back to our neck of the woods.

* Speaking of taking action against Monsanto, the folks at Occupy Big Food are organizing a protest on Wednesday in Times Square, where Monsanto’s CFO will be speaking at the Bank of America/Merrill Lynch conference.

Kerry Trueman is co-founder of EatingLiberally.org, a netroots website & organization that advocates sustainable agriculture, progressive politics and a less-consumption driven way of life. She has written about edible landscaping and organic gardening for the Financial Times and served as food editor for lime.com before becoming a sustainability blogger for Participant Media’s takepart.com. Trueman currently writes about climate change, low-impact living and sustainable agriculture for the Huffington Post, Civil Eats and EatingLiberally, and authored a chapter on ecological eating for Rodale’s Whole Green Catalog (September 2009). CREDO Mobile awarded her their “Activist Blogger of the Year” award for 2009. Her most recent projects are Retrovore.com, a website for farmers, gardeners and eaters who favor conservation over consumption, and The MudRoom, a weekly webcast in development that blends muckraking and cultural commentary.