The multi-billion-dollar, every-five-year legislation known as the Farm Bill is making its way through Congress right now. The full Senate has passed a version that cuts the SNAP program (formerly known as food stamps, and, by whatever name, a critical lifeline for thousands of American families as well as an excellent economic stimulus) by $4.5 billion, while the draft making its way through the House would cut the program by $16.5 billion. While the Senate version is overall kinder than the one in the House, 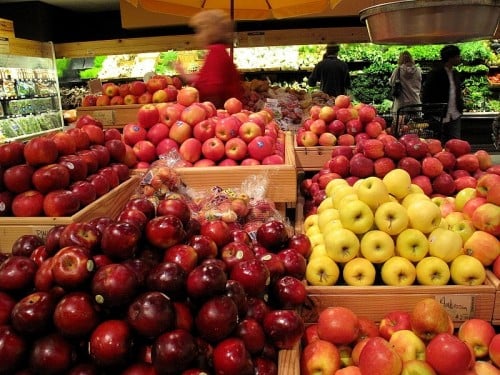 both also make various levels of cuts to conservation, support for minority and beginning farmers, and support for organics, while including big giveaways for agribusiness and insurance companies. The FOOD and Farm Bill, as it should be known, is actually about much more than farms, it’s about the food we eat – and as such, it should be on the radar of everyone who eats. Here’s why it should matter to you.

1. The erosion of democracy. The food system is one of the least democratic parts of our economy. The Food and Farm Bill further consolidates the power of Big Food — the huge food and farming corporations who make the decisions about what we eat. Average Americans no longer have a say in how our food is grown, where it comes from, what’s in it, what’s sprayed on it, where it’s sold… the list goes on. We’ve almost entirely been taken out of the equation. The right to good food for all has become the right for a few to profit from food. That doesn’t sound like democracy to me.

2. The food we eat is killing us. US agriculture policy — as spelled out in the Food and Farm Bill — supports this system of overproducing corn and soy, which is then fed to cattle and turned into things like high fructose corn syrup and other additives used in processed foods. The bill doesn’t give nearly the same kind of financial support to grow fruits, vegetables, or other nutritious foods. These policies that encourage farming of too much corn and soy result in an abundance of cheap and ubiquitous meat and processed foods. And now we have a public health crisis of obesity, diabetes, heart disease and other diet-related illnesses , because we’re all eating so much meat and processed food. For the first time ever, the next generation has a lower life expectancy than its parents – because of the food they’re eating! Our farm policy should support healthy food from healthy farms, not the raw ingredients for chemicals that are slowly killing us.

3. Your fellow Americans. The biggest portion of Food and Farm Bill spending supports the Supplemental Nutrition Assistance Program or SNAP, also known as food stamps, which has been a hugely critical safety net for millions of Americans — as well as one of the best forms of economic stimulus, according to Moody’s . The House Agriculture Committee’s version of the bill, passed last week, cuts $16.5 billion dollars from SNAP. This translates to a loss of $90 dollars a month from the household budgets of 50,000 American families in the program. Almost half of SNAP participants are kids. Why are we making it harder for struggling parents to feed their children at a time of great economic hardship? SNAP is acting as designed, expanding to meet growing needs during economically difficult times; it will shrink again when the economy improves. Instead of reacting to spikes in SNAP numbers by slashing the program and pulling the safety net from struggling families, the bill should strengthen SNAP — while we also focus on creating jobs, paying a living wage, and fixing the broken systems that made the economy collapse.

Don’t stop at getting informed — get involved! This month our Facebook page has been breaking down the Food and Farm Bill and exploring its impact, while finding avenues for action. We invite you to continue the rest of the journey with us through the end of July, following the bill’s path through legislation and staying up to date on how this important piece of politics affects you, and what you can do to have a hand in it.