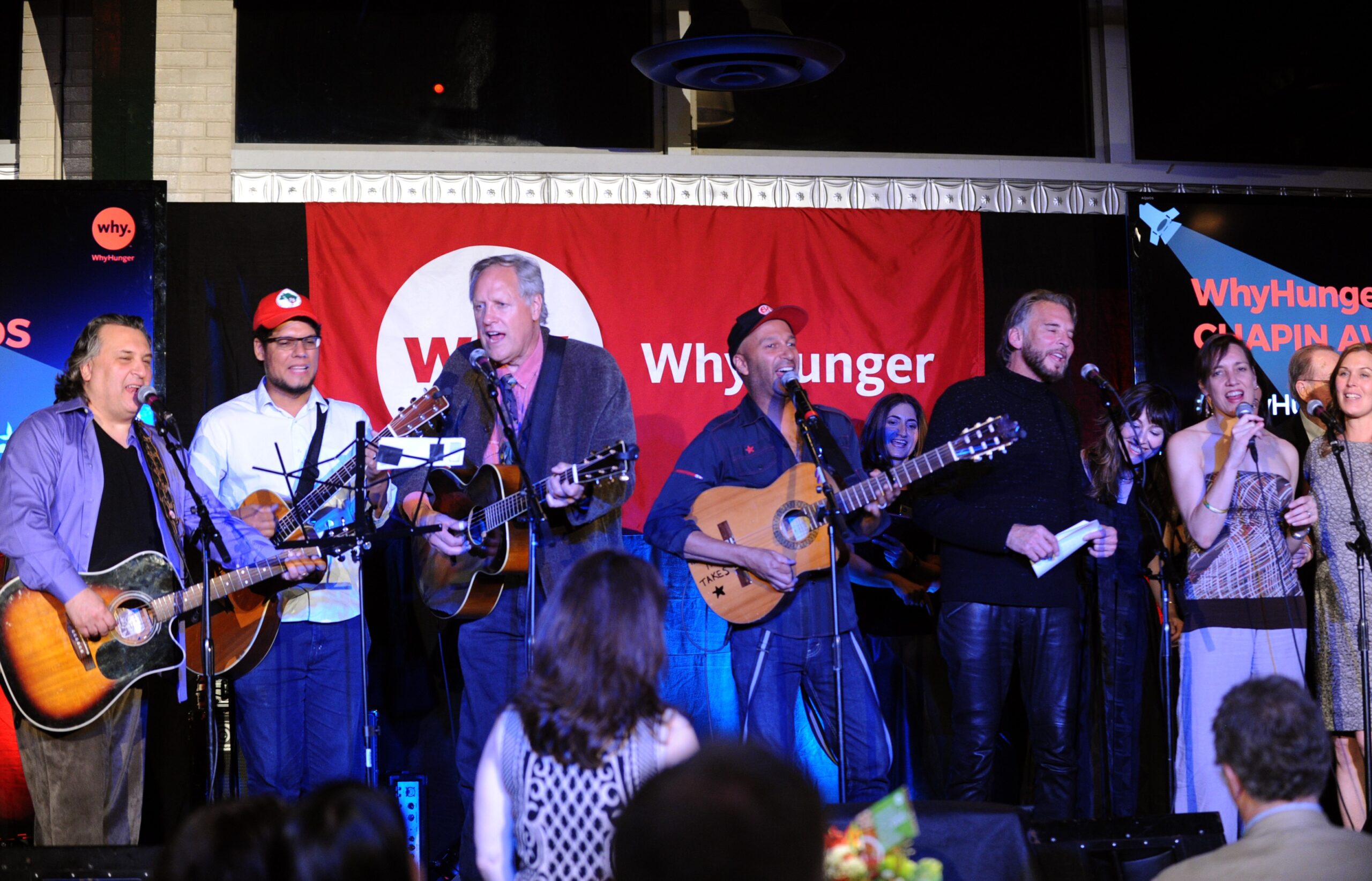 As an organization that believes in nutritious food and social justice for all, May 16th was a night to remember for WhyHunger as their annual WhyHunger Chapin Awards dinner commenced.  Allies and friends came together at The Lighthouse at Chelsea Piers for an evening dedicated to celebrating activism and social movements. The plates were placed, the wine glasses filled, the stage was set. This night of music and celebration is an important moment of fundraising. In addition to all of our gracious sponsors, table and ticket buyers, we are thrilled to share that we surpassed our onsite fundraising goal, raising more than $61,000 to support programs that are fighting for an end to hunger and poverty and the right to nutritious food for all. Watch a recap video here.
With our honorees Brazil’s Landless Workers Movement, known as MST in the U.S, (Harry Chapin Award), Kenny Loggins (ASCAP Harry Chapin Humanitarian Award) and Tom Morello (Harry Chapin Humanitarian Award) present, excitement was in the air as the audience took their seats after a tasty cocktail hour. 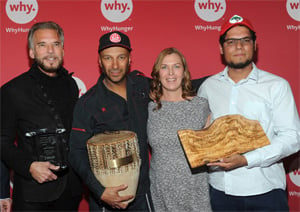 The night began with an impactful performance by our very own Board Members Tom Chapin, Jen Chapin, Joe D’Urso, Seth Saltzman, and Tom’s bandmates Michael Mark and Jon Cobert . In the hopes of bringing inspiration and fun to the stage, the band set the atmosphere for our host of the evening, WhyHunger Hungerthon partner and host of Sirius XM’s “Stand Up! with Pete Dominick”, Pete Dominick. Pete’s wit and smart humor got the crowd revved up as our Executive Director Noreen Springstead took the stage to give a warm welcome.
Sharing a little of her experience and personal reflections, Noreen stated: “I am honored to be standing here tonight in my second year as executive director and 24th year as a staff member of WhyHunger.  My enthusiasm and passion about our mission and our path forward keeps growing. My hope for you this evening is that you have fun, feel inspired and leave with the clear understanding of our work and knowledge that charity will not end hunger; working for social justice will.” 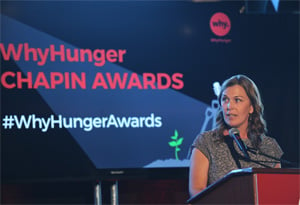 Before the awards presentation, our attention was brought to a short animated video about WhyHunger’s unique approach in supporting grassroots solutions and social movements. In a nutshell, the video expressed the importance of supporting WhyHunger’s mission. It’s not only about feeding communities, it’s about building and supporting social movements that will find a way to create their own solutions in the face of adversity . The support that WhyHunger receives help to fuel those social movements in their commitment long-term change and justice; as Noreen stated, “As you can see, we must go beyond the traditional charity models and boldly invest in the grassroots solutions and social movements that are transforming our world.”
With much applause and agreement, Noreen presented the first award to the MST who was represented by Raul Amorim. “For more than 32 years, the MST has been organizing rural families to reclaim unused land for the purpose of growing food for themselves and their communities. Along the way, they have trained thousands upon thousands of farmers in agroecology, organized and empowered women and youth, provided political education to resist seed patenting, developed markets for locally-produced food, and built schools in rural areas.  ” Raul gave a passionate speech and it became clear that the work that WhyHunger and our partners do is more important than ever.
Next Seth Saltzman, ASCAP Senior Vice President and recently appointed Board Chair, presented the ASCAP Harry Chapin Humanitarian Award to Grammy-winner, songwriter and humanitarian Kenny Loggings, saying “Kenny is supporting WhyHunger’s 2016 Summer Meals Rock for Kids campaign as an artist ambassador, to connect kids in need with free, nutritious meals all summer long when they are most in need. We are so happy that Kenny has joined the WhyHunger family and gives new meaning to ‘Whenever I Call You Friend. After receiving his award, Kenny performed Conviction Of The Heart and Danny’s Song singing “How long must we wait to change this world bound in chains that we live in”.
The night continued with MSNBC’s John Heilemann presenting the Harry Chapin Humanitarian Award to Grammy-winner, rock guitarist and activist Tom Morello. As Tom rocked out on his guitar, marked with “whatever it takes,” the audience felt and understood the meaningful messages in Morello’s music. 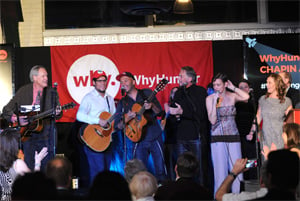 A personal highlight of the night for me, was when all honorees, board members, staff and audience members joined together onstage, at the urging of Tom Morello, to laugh, sing and danced to a rousing rendition of “This Land Is Your Land.” It was a night where strangers became friends and activism rang loud and proud. The fun times were capped off with WhyHunger’s first gala After Party with the 4 D’s: DJ, dancing, drinks, and desserts!
In a world where the fight for social justice is an everyday struggle, it was nice to end the night proudly proclaiming that we all deserve equal rights, while celebrating the substance of WhyHunger’s mission. After all, this land is our land isn’t it?
Tag: Food Justice