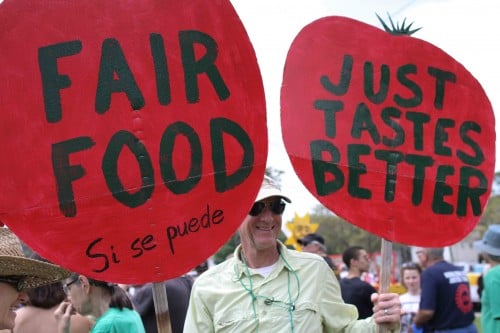 To conclude Farmworker Awareness Week, I am happy to share my experience at the Coalition of Immokalee Workers (CIW) Parade and Concert for Fair Food. The annual action, held this year in St. Petersburg, Florida, was a gathering of thousands of allies, including WhyHunger, from across the country who stepped up to raise the consciousness of consumers and fight for the human rights of workers in the field.

Marching in CIW’s Parade and Concert for Fair Food was my first time participating in a protest and what I ultimately learned is that by exercising my rights, I was helping others gain theirs. My voice and presence, was helping others become visible. I heard directly from the farmworkers and learned about the terrible conditions that many have been subjected to. Being there, I became a part of the movement and as a fairly new employee, officially a part of WhyHunger’s rich legacy in fighting for social justice and strengthening grassroots organizations. I left with a new understanding and reinvigoration for the unique work that we do, simply because it’s important. Those standing up for their rights need continued support. To create a just and sustainable food system, and at the very least, the hardworking people who provide our tomatoes, blueberries, oranges, etc. rightly deserve to work in humane conditions.  That’s all they’re asking for. 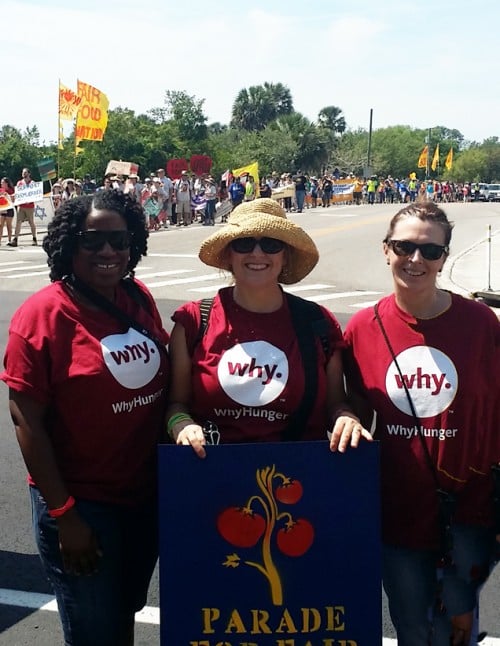 The parade kicked off on a warm, bright day at Bartlett Park with a diverse group of eager supporters armed with colorful banners and signs with statements demanding farmworkers receive things like fair pay, worker breaks and freedom from sexual harassment. I immediately felt a sense of comradery amongst strangers, because we were there for one cause: farmworker rights.  The 3-mile walk was filled with chants such as “This is what democracy looks like!” “What do we want? Justice! When do we want it? Now!” and “The people united, will never be defeated!” as we made planned stops in front of Wendy’s and Publix locations, because the fast-food restaurant and grocer have refused to join the 13 retail food giants that have gotten behind CIW’s Fair Food Program to improve farmworkers’ wages and working conditions. The pressure must be kept on them to join the program because these companies have profited for decades from unchecked farm labor exploitation within their suppliers and change is needed throughout the entire industry.

The day ended with a spectacular artistic and musical celebration that featured award-winning musicians and activists Ozomatli, La Santa Cecilia and Ruby Velle & The Soulphonics and a “mystica” theatrical performance by the Immokalee workers who used puppets, murals, music and narration to tell their historical story. A fitting end, because the movement for fair food has been driven by art and music rooted in cultural traditions to bring their message to life in a real and engaging manner. Each and every performer or speaker spoke passionately from the heart about the need for human rights and dignity in the fields.  The power of music energized and inspired those present as we work to expand the movement that will impact the lives of tens of thousands farmworkers.

I’ll end with a quote that recently stood out for me from New York Times Op-Ed social justice columnist, Charles M. Blow, who said, “The life of a real movement is long and it has downs as well as ups. One measure of its merits is its resilience.” This is true. CIW first began organizing in 1993 and the movement has had downs and ups along the way, but it is resilient.  CIW has remained driven, committed and focused on the cause and as a result, have gotten recent wins including their Food Chains film being nominated for a prestigious James Beard Award and just this year major food retailer The Fresh Market signed the Fair Food Agreement. You can contribute to their future successes by taking action to support this movement in a number of ways:

Check out a slideshow from the event below.